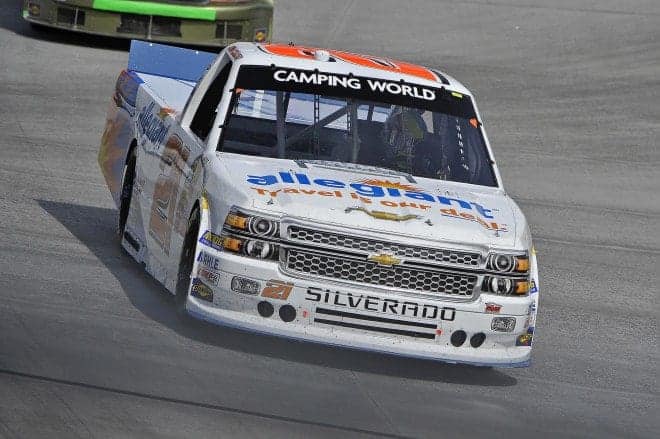 High Point: GMS Racing wasn’t a total startup due to its acquired equipment and some part-time experience in the series. However, in the team’s first full season, it was still worth pointing out when they could challenge for wins. Coulter came closest at Pocono, trailing the leader close in the waning laps and still managing a respectable third, his best of the season and one of three top 10s on the year total. Not bad at all.

Low Point: After a fairly strong middle part of 2014 that he maintained through September, the wheels began falling off Coulter’s 2014 campaign. The seeds were planted for good runs—perhaps finally a win, too—but over the last four races of the season, he managed only one top 10 and scored an average finish of 22.2, with two finishes of 30th. The end of a season is when you want to be excelling, and instead he faltered.

Summary: He was hooked up with some of the best teams in the business for his first three years in the Camping World Truck Series, first with Richard Childress Racing and then via Kyle Busch Motorsports for his third year. For 2014, he took a perceived step back with GMS Racing, but interestingly, his results didn’t suffer—in fact, they improved. 2012 brought the first win, 2013 the sophomore slump. In 2014, Coulter was back to relevance, breaking back into the double digits in the top 10s category and even managing to remain within arm’s length from the championship lead before a dismal final few races dashed his opportunity to play spoiler. It wasn’t a banner year—and he only led one lap—but compared to a 16.6 average finish that marked his KBM tenure, give him a hand.

2015 Outlook: No news is… well, maybe just that. Coulter hasn’t yet announced where he’ll be in 2015, and GMS Racing hasn’t confirmed its driver lineup either. Rumors are swirling, though – some saying Coulter will be back, others suggesting a change in the seat. His 2014 definitely earned him another go-round, but as of press time, nothing is set in stone.