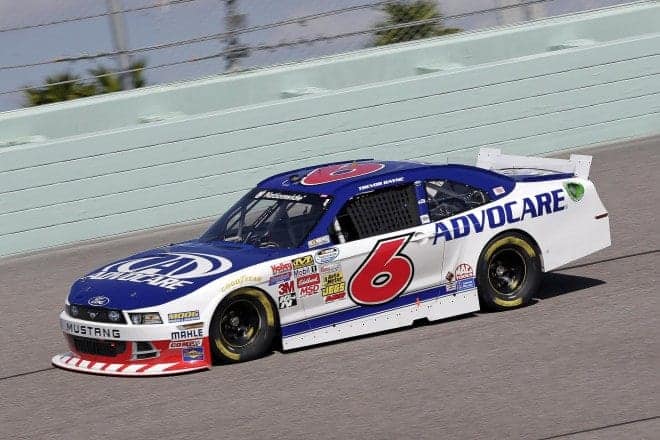 High point: Announcing he will be racing full time for Roush Fenway Racing in the Sprint Cup Series next season.

Summary: Trevor Bayne had a busy 2015 season. While racing full-time in the Nationwide Series for RFR, Bayne also ran 12 NSCS races for Wood Brothers Racing, which is the team Bayne won the 2011 Daytona 500 with.

Though he never finished any higher than 19th in NSCS competition, Bayne’s two runner-up finishes in NNS were enough to earn him a spot in the RFR lineup in NSCS for the 2015 season. Though Bayne never made it to victory lane — unlike his teammate, Chris Buescher — Bayne was consistent, competitive and has plenty of experience in both series to justify the move.

That’s not to say that Bayne couldn’t have won at all this season. One of the more heartbreaking moments of the season — at least for Bayne — was when he lost a tire while leading the race at Texas Motor Speedway last month. Bayne had led 15 laps at the time and appeared to have a fast racecar (though whether he was going to be able to hold off Sprint Cup Series regulars Kyle Busch and Joey Logano was debatable).

Even still, Bayne certainly had the speed to go to victory lane, most notably in Chicagoland where he led 14 laps, but had to settle for second behind Chase Elliott. Or in the August race at Iowa Speedway, where Bayne led the way for 31 laps but was beat by NSCS regular Brad Keselowski and finished third.

Even with all of those stats, RFR was unimpressive as a whole in 2014 and struggled to remain competitive with the likes of Joe Gibbs Racing and Penske Racing (at least on the Nationwide side). Buescher was the only driver to make it to victory lane and, though Bayne showed signs of strength several times, the fact that he wasn’t consistently showing more speed was surprising and perhaps a little worrisome.

2015 Outlook: There is no doubt that Bayne has earned his ticket to full-time NSCS competition in 2015. He has plenty of experience in both series and enough success to justify the move. However, with the way RFR has been running as of late, it’s hard to say whether or not this will be a successful move for Bayne. Perhaps RFR will fix their woes over the offseason, but RFR has given drivers opportunity before, only to chew them up and spit them out some time later (see David Ragan for an example).

However, Bayne certainly deserves the opportunity and Wood Brothers would likely be happy to have him back if things don’t work out.