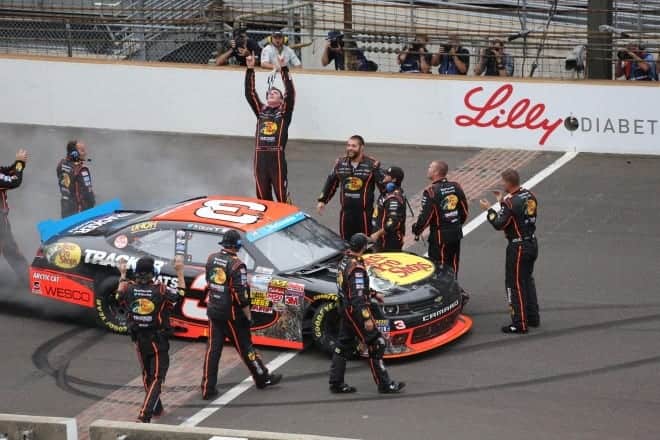 High Point: They don’t get much easier to choose than this one. Ty Dillon’s only win of the season came at the most famous racetrack on the planet. To make it even sweeter, he only led once, for the final 24 laps of the race. Taking the lead from Kyle Busch on the final restart, Dillon was never seriously challenged as he took advantage of all-important track position at the Brickyard. Holding off the all-time winner in the Nationwide Series while taking the No. 3 to Indy victory lane for the first time since 1995 was something to see.

Low Point: In a season where Dillon only had three finishes outside of the top 15 and just one outside of the top 20, it is obvious his low point was that single finish in the bottom half of the pack. Throw in the fact that it happened at Charlotte, when Dillon came into the race 40 points behind Chase Elliott for the series points lead and the sting is that much greater. An ugly crash with Eric McClure, one in which Dillon appeared to get impatient resulted in his only DNF of the season, knocked out half-a-dozen cars and all but eliminated him from title consideration.

Summary: For his first year in the series, 2014 was a strong one for the younger of the two Dillon brothers. Most any other season, Dillon would have probably walked away with Rookie of the Year. Unfortunately, Chase Elliott‘s first year meant the younger brother to Cup driver Austin spent most of the season playing second fiddle. Still, a top-five finish in points during his first season running in the series and working with Danny Stockman is a great result, one that has the No. 3 Nationwide team poised to make another run at the title that they took in 2013.

2015 Outlook: 2015 will see Dillon make another run at the Nationwide title and probably see another dogfight with Elliott when the season comes to an end. As of this writing, WESCO is the only sponsor to have confirmed for the 2015 season with an undisclosed number of races. However, with the ties between Johnny Morris and RCR, Bass Pro Shops will continue to be on the hood for a number of races again next season.

Dillon’s relationship with Yuengling Light Lager should also lead to a nearly fully-sponsored campaign by the time Daytona rolls around. On a personal note, Dillon will also be experiencing life as a married man in 2015 after he weds Haley Carey on December 20th. Fans looking to help the young couple out can see their wedding registry at Williams-Sonoma, Pottery Barn and Target.