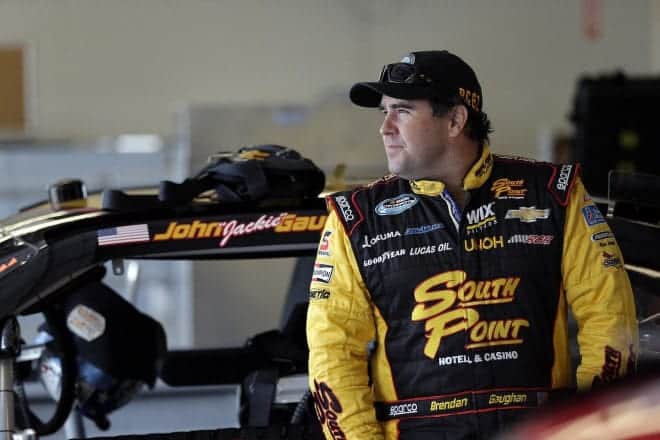 High point: Brendan Gaughan, a former full-timer in each of NASCAR’s top-three series, had never earned a victory on a road course. To break through this June, ending an 10-year winless streak inside the sport was a tremendous personal accomplishment for the Nevada native typically strong at 1.5-mile, cookie-cutter ovals – not the 4-mile monster of left and right turns otherwise known as Elkhart Lake.

But Wisconsin was kind to the Richard Childress Racing driver, who qualified fifth, stayed within striking distance of the lead all race and then capitalized when a dominant Alex Tagliani ran out of gas down the stretch. Put out front, Gaughan had to survive a frantic last-lap battle involving himself, Chase Elliott, surprise Kevin O’Connell and a surging Tagliani to emerge with his first victory of any sort in NASCAR since the Texas Truck Series race way back in November 2003.

Low point: Gaughan’s solid start to 2014, with two top 10s in the first four races came to a screeching halt at Darlington. In position for another top 10, he sat 12th on a green-white-checkered restart and sat just one turn from pulling it off. But contact in a heated battle with Ty Dillon and Brian Scott sent Gaughan sailing, turned head-on into the inside wall before the finish line.

Totaling his car mere seconds from the end, that surprising DNF saw him tumble to 22nd and, more importantly stripped momentum from his fledgling program. Dropping to seventh in points, 56 out of the top spot he would never seriously reenter title contention the rest of the year.

Summary: Gaughan, competing full-time in the Nationwide Series for the first time in four years had a feast-or-famine type of return. Winning twice, his first NASCAR triumphs in over a decade built confidence his career, maintained mostly through family funding during an extended slump was back on the upswing. Chemistry with longtime crew chief Shane Wilson when the car had speed allowed them to maximize their few opportunities up front, sneaking away with those trophies.

Among the NNS full-timers, only eventual champion Chase Elliott won more, a surprising stat considering Gaughan’s eighth-place finish in in the final standings.

The problem for the No. 62 team was when the car was off, the car was off – handling so bad simply finishing on the lead lap was a struggle. There were no other top-five finishes beyond the two wins, while two of Gaughan’s five runs of sixth through 10th happened within the season’s first month. In their place slipped in mediocre results, often at intermediate tracks where the extra horsepower of rivals JR Motorsports and Joe Gibbs Racing made an impact.

The gap for RCR at ovals where raw speed was a factor just became too much to overcome, although Gaughan didn’t help matters much by falling victim to pit-road penalties or a variety of silly mistakes.

2015 Outlook: Gaughan will be back to run the series full-time, his crew remaining mostly intact before pondering a potential move back to Cup come 2016. With teammates Scott and Ty Dillon back, as well as the return of former champion Austin Dillon RCR hopes this group can make a serious run toward the season title.

A LOOK BACK: CHECK OUT GAUGHAN’S DRIVER DIARY THIS SEASON WITH FRONTSTRETCH