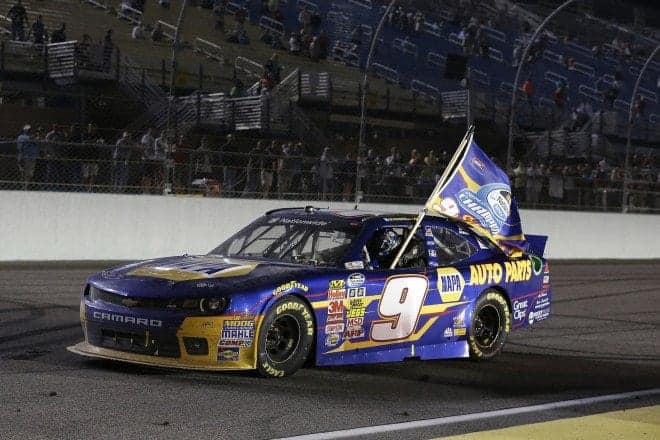 High Point: Many would select Elliott’s first win at Texas or winning the championship as the highlight of his season, but how about Darlington? After restarting sixth late in the race, Elliott powered past Elliott Sadler on the final lap to claim his second overall win and second consecutive win in only his seventh start in the series. Winning at one of the toughest tracks on the circuit cemented his legitimacy in the series and proved that his victory at Texas was no fluke.

Low Point: It’s hard to find a low point in Elliott’s impressive rookie season. Only once did he finish outside the top 20, when the series made its first stop at Charlotte Motor Speedway in April. A rare parts failure put Elliott in the wall and resulted in a 37th-place finish, dropping him to third in points. Although we all know how it turned out in the end. Plus, he redeemed himself finishing eighth when the series returned in October.

Summary: Elliott had some big shoes to fill, following in the footsteps of his Hall of Fame father Bill. Most would agree that those shoes were filled, and then some. A rookie in the Nationwide Series, driving for the sport’s most popular driver, and for a team that was still being pieced together in January of this year, Elliott seemed to have the deck stacked against him.

However, from the drop of the green flag in Daytona, he showed patience, poise and knowledge that seemed to stretch well beyond his age. Those traits paid off, as Elliott became the first rookie to win the title and youngest champion in the history of NASCAR’s three national touring series.

2015 Outlook: Elliott will return full-time to the NASCAR Xfinity Series in 2015 to defend his championship. Much of the conversation these days concerns where he will end up in 2016 now that Kasey Kahne extended his contract with Hendrick Motorsports through 2018. He will make a handful of Sprint Cup Series starts in 2015, with Kenny Francis potentially on top of the pit box. However, when – and for whom – is not yet determined.