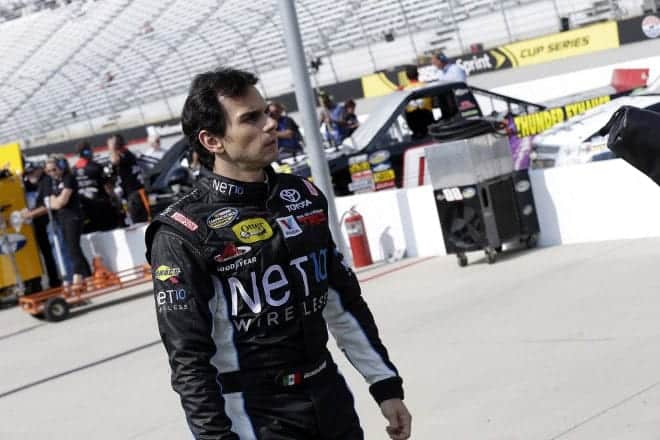 High point: Racing in Mexico and winning the NASCAR Toyota Series championship paid off immensely for Quiroga when the Truck Series arrived at the Canadian Tire Motorsports Park. After starting out hot on the year, he finished 12th or worse in four races spanning Kentucky to Bristol, but afterward, in what ended up being one of the most intense battles for a victory in 2014, Quiroga came up a mere .049 seconds short of Ryan Blaney at the 2.459-mile road course.

Although he didn’t win the race, he was able to earn the respect of his peers for racing clean following criticism after the Gateway race, where he was overly aggressive late in the event.

Low point: Entering Pocono in early August, Quiroga was just 26 points behind the championship lead. However, in a race that featured Quiroga running quite poorly, his temper began to flare. Late in the race, he got into Tyler Reddick, and the young driver wasn’t pleased with the pilot of the No. 77 truck. Several laps later, Reddick turned Quiroga, and he ended the day in 22nd, which was the start of a rough stretch for the Red Horse Racing No. 77 team. Following that race, he began to overdrive like he often did in 2013. In the second half of the season, he recorded just one top five with three top 10s.

Summary: It was a mediocre year for Quiroga overall. He started off very strong with plenty of help from having a new crew chief. Starting off the year with seven top 10s in the first 10 races, Quiroga appeared to be racing a championship-caliber season, but that wasn’t the case as they struggled at the intermediate tracks.

When adversity struck this team, it struggled more than it should have. However, it wasn’t just a problem for the No. 77 crew. Timothy Peters had an iffy season as well, and Red Horse’s third truck was supposed to run the full year but only competed in a handful of events. Quiroga was expected to win a race in 2014 after getting in a full year’s worth of experience, including a few solid runs. But the team didn’t have what it took to contend consistently, and now his future with the organization is in doubt.

2015 Outlook: Sponsorship will likely determine what Quiroga will be doing in 2015. During an interview in August, he told Frontstretch that he believes it will be time to move up to what will be called the Xfinity Series. However, his sponsors, OtterBox and Net 10 Wireless, are evaluating their involvement. But after showing improvement in 2014, he deserves another shot with at least the Red Horse organization, which is capable of running up front as seen with Peters in the past.