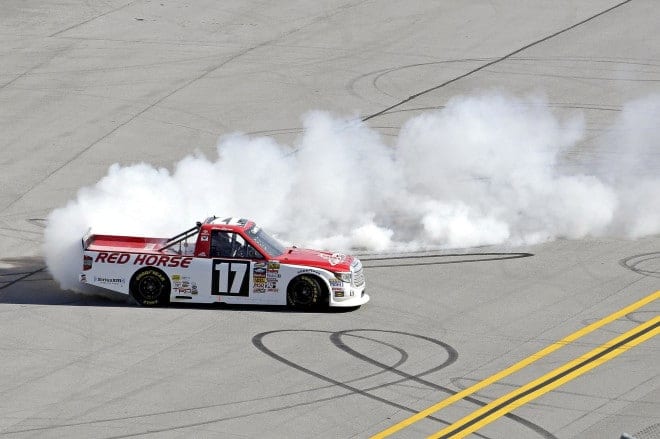 High point: It was a rather quiet year for the No. 17 team, but Talladega was the perfect setting for Peters’s lone win. In the past, he has shown signs of strength late in restrictor-plate races, and he did just that in October. Avoiding four-wide chaos behind him, he was able to drive away to take the win following a solid effort at Las Vegas less than three weeks before the Talladega race. The win gave him momentum going forward, and he finished inside the top three in all but one of the final five races.

Low point: Iowa was not kind to Peters in July. While competing inside of the top 10, Ron Hornaday Jr. and he got together on the front straightaway. Coming off of back-to-back top fives at Gateway and Loudon, he was comfortably third in points, just 11 markers behind the championship lead. However, Peters showcased his frustration as the field was slowing down to get behind the pace car by turning the No. 30 truck on the backstretch. He finished 31st that day, and it killed the momentum he had to contend for a title as he struggled in the next two races.

Summary: Sometimes, a good year just isn’t enough. After a rough 2013 season, Peters showed improved in 2014 with his fair share of top-five runs. However, leading under 200 laps for the first time since 2011, he failed to run up front like he did during his runner-up season in 2012.

Red Horse Racing was missing the little extra something once again this year, and it proved to be the difference maker in Peters’s season. Although he struggled in the middle part of the season, he rebounded very well in the final stretch to finish fifth in points after sitting as low as eighth with just six races left in the season. It was an average year for him, but with plenty of solid runs in 2014, he was able to get the most out of his equipment when Kyle Busch Motorsports was the leading ship in the Toyota camp.

2015 Outlook: It appears as if Peters will be back in 2015. Although nothing has been confirmed by Peters or the team, they have a great partnership together that should continue into next year unless someone comes up with a better package for him in the Xfinity Series. The No. 17 truck had limited sponsorship in 2014, so that could be a dealbreaker if it can’t secure more funding for a man that should be a serious threat for the title next year.