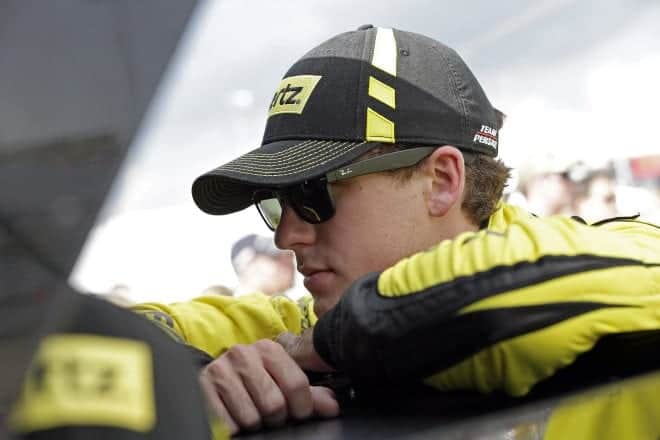 High point: Blaney, fast becoming one of the top prospects in NASCAR these days showed his versatility north of the border. Leading a race-high 34 circuits, he proved adept at the left-turn, right-turn Canadian Tire Motorsports Park and had the day’s most dominant car. But as the laps wound down, it was the pressure that wound up as young German Quiroga saw his No. 77 Red Horse Racing Toyota come to life.

Charging forward on the final lap, he passed Blaney clean, desperate for his first career victory (and perhaps a career-saving moment) in the Truck Series. It was a moment most drivers, especially “young guns” would wave the white flag of surrender. Instead? That’s when this young driver, who has developed a Terry Labonte-style “coolness” behind the wheel showcased the poise that’s made him a Roger Penske mainstay. Calmly passing Quiroga back, then gunning it to the line he wound up taking the checkered by .049 seconds – about half-a-car length – in one of the closest NASCAR finishes this season.

Low point: For all the great things Blaney accomplished this year, it’s easy to forget his first month had some questioning if Keselowski and Penske, his employers would even keep the driver over the long-term. He had two wrecks in the first four races at Kansas and Charlotte that dug him a deep hole in the title chase.

The second wreck, dropping him to ninth in points was especially damaging as Blaney got a little too aggressive, paying the price on Charlotte’s dogleg when a move on John Wes Townley didn’t work out. Those two results, both 22nd, wound up being Blaney’s only DNFs, his worst finishes of a brilliant season that would have otherwise wound up with him as series champ.

Summary: Blaney, not yet 21 made a big step toward becoming the big-time Sprint Cup success many NASCAR veterans think he’ll become someday. In just his second full-time season running the Truck Series, he gave eventual champion Matt Crafton a run for his money while recovering from a sluggish start. Earning top-10 finishes in 17 of 22 events, he showcased versatility while taking BKR equipment to the front in what’s been a difficult series for Ford chassis to find success.

Blaney also took his talents to the Nationwide Series, notching a win at Bristol, one of the sport’s most difficult tracks while running a limited schedule with Team Penske equipment. That victory, coming in the August night race gave him additional momentum in his bid to catch Crafton, along with a September Truck Series triumph in Canada.

Unfortunately for him, the wily veteran never wilted, matching every challenge down the stretch. Blaney’s early wreck were too much to recover from, along with a rough Michigan race where he ran 21st after starting from the pole. Crafton’s consistency so strong you can’t make those mistakes against him; the final margin between the two stood at 21 points after Homestead even though Blaney closed with seven consecutive top 10s.

Second, in this case was technically the first loser but the experience clearly served Blaney well over the long-term. It won’t be the last championship battle he’ll face and the experience proved valuable for someone who’s already performing like a driver who’s been around for a decade.

2015 Outlook: Blaney, while not running full-time in any of NASCAR’s top-three series will still have his hands full with work. Earning a promotion to the Sprint Cup level, he’ll man the No. 21 Wood Brothers Ford as the team transitions to Team Penske chassis and support. For now, the schedule is just 12 races but they’re searching for additional funding to run more. Blaney will also man the No. 22 Discount Tire Ford, Penske’s primary car in the Nationwide Series for a handful of events and moonlight in BKR’s No. 29 on occasion as well.

It’s an ABC plan Penske has used before for a guy they thought had championship-level potential someday: Ryan Newman. If Blaney can match the path of last year’s Cup Series runner-up, equaling those results from way back when my guess is there’s a great career ahead for the youngster.

No one can doubt Blaney’s talent, especially seeing his performance as one of two or three full-time Ford drivers in the Camping World Toyota Series (thanks JohnQ). But the interviews where he says he’s focusing on Cup next year are a little worrisome. Eagerly leapfrogging the Saturday series or multiple full seasons in trucks for the big time has bitten young competitors a time or fifteen.