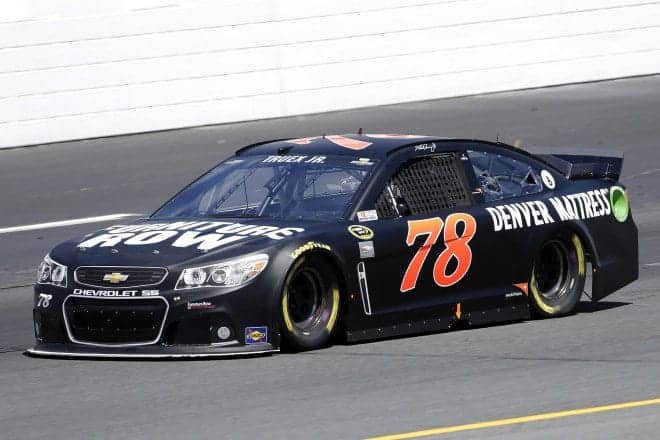 High Point: It is difficult to locate a high point of a mostly frustrating season for Martin Truex Jr. and the No. 78 team. However, his fourth-place finish in the Hollywood Casino 400 at Kansas marked their first and only top-five finish of 2014. Perhaps the most notable observation about the finish is that it happened late in the season, just one week after a strong seventh-place showing at Dover. Back-to-back competitive runs could certainly be a sign that the new driver and team combination were starting to gel as the season came to a close.

Off the track, the Martin Truex Jr. Foundation’s annual “Catwalk for a Cause” was once again successful in raising thousands of dollars for kids with cancer and their families.

Low Point: For most of the season, the New Jersey native struggled to find the right speed and handling combination with his new team to be competitive. When they did land on something, all too often the results didn’t reflect the effort due to circumstances outside of their control. However, the lowest point for Truex came away from the track when longtime girlfriend Sherry Pollex was diagnosed with ovarian cancer in August.

As Pollex continues to undergo treatment, many drivers displayed a teal ribbon on their car and orchestrated fundraisers to help fight the disease, illustrating the generosity of the NASCAR community.

Summary: Truex kicked off his 2014 campaign with a bang, putting his FRR Chevrolet on the outside pole for the Daytona 500. The euphoria was short-lived however, as he was caught up in a last-lap wreck in his Budweiser Duel. While the standings will show an eighth-place finish, his Chevy SS sustained enough damage to relegate the team to their backup car, forcing them to forfeit their front-row starting position for the Great American Race. Truex and Company remained positive about their chances, however their engine had other ideas, expiring after just 30 laps into the season opener, resulting in a last-place finish.

The rollercoaster ride through Speedweeks was a sign of things to come as the Denver based organization could never quite get its footing. The No. 78 was never a back marker yet it was rarely in contention either, as illustrated by a season average start and finish of 20th place.  There were some moments of hope through the season however, as Truex compiled back-to-back top-10 finishes on two separate occasions.

There were also a few that “got away.” The most infamous example was at Atlanta where a potential strong run was ruined by an error in judgment by Kyle Busch (see the clip below). The incident left the normally even-keeled Truex fuming and prompted a conversation between the two drivers after the race.

In summary, 2014 had to be disappointing for both a team that competed in the 2013 Chase for all 10 races, and a driver that was in it for about a day. This team will certainly want to learn from what went right in their five top-10 finishes and build upon it in 2015.

2015 Outlook: Furniture Row Racing just announced that 32-year-old Cole Pearn, the team’s lead race engineer and a former racer himself, will replace Todd Berrier atop the pit box. The move could prove to be beneficial for Truex, who thrived under the leadership of another engineer, Chad Johnston, while at Michael Waltrip Racing. Look for this team to produce better results more consistently and perhaps contend for a surprise victory in 2015.