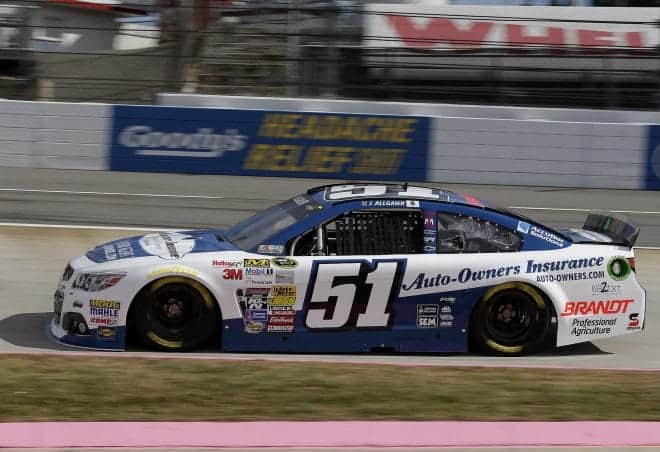 High Point: Justin Allgaier had some decent runs spread throughout the season, but he really came on strong right at the end, as his best finishes came after Columbus Day. Luckily, the qualifying shenanigans at Talladega that forced him to sit out the race didn’t affect this team’s momentum.

Sadly for fans of “Little Gator,” his best efforts of the entire season were also completely anonymous, inside NASCAR’s postseason when most of the focus was on title contenders. His “high point” just so happened to be at Homestead, excelling when everyone’s attention was on the four drivers chasing after the championship. With all the hubbub, Allgaier qualified a season-best 14th and kept himself in the top 20 for most of the race, eventually earning his second 15th-place finish of the year.

Low Point: The easy way to go here would be to pick the Talladega DNQ. However, that was not Allgaier’s fault, the result of posturing by others. Instead, we’re going to go with Kansas in June. On paper, you’d think that the decision is simply one of pyromania or crash lust. Bear with me.

The 5-Hour Energy 400 at Kansas Speedway was one of Allgaier’s best runs of his rookie year. Partially through pit strategy, but also through speed and setup, Allgaier raced himself into the top 10 past the halfway point. Sure, he fell back a little as the race continued on, but he was still in position for one of his best runs of the year. Then, AJ Allmendinger got loose in turn 4 right after a restart and clipped Allgaier in the right-rear corner.

Allgaier was OK but took a big hit from David Gilliland that knocked the air right out of him. The Brandt Chevrolet had clearly seen better days and was done for the night.

Summary: After racing full-time in the Nationwide Series for five years, Allgaier finally got his shot at Sprint Cup. Overall, the year was a middling experience. Compared to fellow rookies Austin Dillon and Kyle Larson, Allgaier’s season was not even in the same league. Out of 36 races, Allgaier was never able to earn top freshmen honors once despite finishing third in the final rookie standings.

Then again, very few people expected Allgaier and HScott Motorsports to race Dillon and Larson heads up much in 2014. HScott Motorsports simply doesn’t have the resources of Richard Childress Racing or Chip Ganassi Racing with Felix Sabates. They’re more like the Stavola Brothers were when Jeff Burton came into the series in 1994.

Early on, Allgaier had trouble putting down decent laps in qualifying. The bad efforts on Friday put the No. 51 team in a Sunday hole, one that Allgaier would have to spend much of the day climbing out of. As the year went on, like with most rookies Allgaier got more used to the Sprint Cup car as opposed to the Nationwide equipment. That led to improved results, building momentum for 2015 despite missing the Chase by a mile. Having Steve Addington on top of the pit box definitely gave Allgaier that veteran experience that he needed to thrive, but there’s no substitute for seat time.

2015 Outlook: All signs point to Allgaier returning to HScott Motorsports for another full season. The team has not officially announced that Allgaier will be back, but their postseason promotion of Allgaier on their Twitter page indicates that he will likely return. Brandt is expected to return as a sponsor, with additional financial announcements forthcoming. The team ended the season with the most momentum that they had all year. If they can maintain that at the start of the season, significant improvement in Allgaier’s sophomore year could be at hand.

No review of a Harry Scott-owned team would be complete without mentioning the current issues Scott is dealing with. As many of you are aware of, Scott has been involved in a power struggle between himself and Turner Scott Motorsports co-owner Steve Turner that saw Ron Hornaday lose his ride in the Camping World Truck Series despite being fully funded for the remainder of the season.

Since Turner has never been involved with HScott Motorsports, the team is likely insulated from the ongoing spat between the two, but not completely. That power struggle is likely to result in the shuttering of at least a couple of the eight full-time teams between three different series that Turner Scott Motorsports fielded in 2014. Don’t be surprised if HScott loses some investment or sponsor backing because of the spat as well.