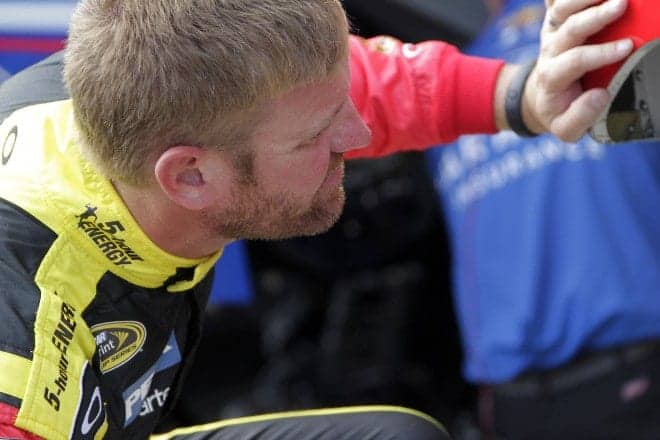 High Point: Bowyer’s peak in 2014 came at Charlotte in May when he won the Sprint Showdown, which interestingly ended up becoming his sole victory of 2014, as well as a rare bright spot for Michael Waltrip Racing as a whole. Hey, it was an exhibition race, but at least it got him in the All-Star Race. Honorable mention to a pair of third-place results at Talladega.

Low Point: Aside from being embroiled in a legal dispute over owing $30,000 for work done on his customized Harley-Davidson motorcycle, Bowyer suffered two high-visibility last-place finishes in 2014: one from a suspension problem at the Toyota Owners 400 (ouch!) at Richmond in April and the other from an engine failure at Charlotte in October. Another low was Bowyer’s 42nd-place finish at Daytona in February – again because of engine woes.

Summary: Bowyer had high hopes for 2014 coming off the embarrassment of Spingate at Richmond the previous fall. Unfortunately, the No. 15  suffered what could only be called a mediocre season. With average starts just outside the top 15, and with average finishes mired deep within the top 20, Bowyer could never build the momentum necessary for a place in the Chase.

Despite making strong runs at Talladega and Richmond, Bowyer’s 2014 Cup effort seemed to be a lesson in futility. The popular driver did what he could to make the postseason, but two regular season DNFs hindered his chances. Even if Bowyer made the Chase, the three DNFs he suffered during the final 10 events would have hurt his title hopes. On the personal side, Bowyer enjoyed a very positive 2014: he was married in April and became a father in October.

2015 Outlook: Next season for Clint Bowyer can only be an improvement over his 2014 campaign. Bowyer, crew chief Pattie and primary sponsor 5-hour Energy are all secure at MWR with contracts extended through 2017. Toyota’s newly-designed Camry may also be a game changer for Bowyer, even if NASCAR’s test ban eliminates any real chance to work with the car before the season opener at Daytona.