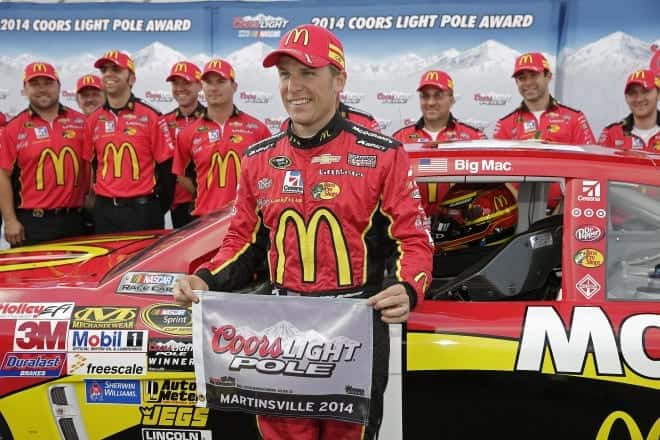 High Point: No question: it was winning the 2014 All-Star Race with a fantastic pass of Carl Edwards in the final segment. McMurray hasn’t won many races in his long career, but when he wins they tend to be big races (Daytona 500, Brickyard 400 among them). Adding the All-Star Race to that list was a wonderful highlight for the veteran in 2014.

Low Point: Not making the Chase has to count as a low point, making him an All-Star Race winner that couldn’t find his way into the playoffs. After beating the best in the business, one had to imagine a Chase berth was on the way.

Summary: Statistically speaking, 2014 was McMurray’s best season since his three-win 2010 campaign, continuing an upward trend for CGR after dreadful years in 2011 and 2012. McMurray scored his first top 10 (10th) in the second race of the season at Phoenix and picked up a sixth-place finish at Bristol two races later. But it would take until the 12th race of the year at Charlotte to record his first top five (fifth), buoyed perhaps by his fine win in the All-Star Race the weekend prior.

From there, he had his good runs here and there, unable to score the win he needed to make it into the Chase but running at a level that allowed him to avoid any talks of major failure.

He had a strong enough showing throughout the end of the year to manage his 18th-place result in the standings, making him the second-best finisher in the standings that wasn’t in the Chase, behind teammate Kyle Larson.

All told, it wasn’t a bad year for McMurray, especially when you consider the big win in the All-Star Race.

Looking forward to what lies ahead in 2015 RT @CGRTeams: Excited to welcome @Matt_McCall to the No. 1 Crew and Chip Ganassi Racing Teams!

2015 Outlook: With a new crew chief in position in Matt McCall, McMurray will look to win a race in the regular season and make the playoffs while continuing mentoring teammate Larson. He’s built a solid partnership with Ganassi in what’s been nearly a half-decade with the team, though if another Chase is missed, one has to wonder about his future.

When one CGR driver does well, they usually both do well as is evidenced by both McMurray’s and Larson’s 2014 season results. Conversely, when one has a bad season they usually both do. That tells me there is little organizational stability, likely due to financial issues such as compensation. If Ganassi wants to be a championship-winning organization, he better be willing to shell out the big bucks that it costs to be competitive.