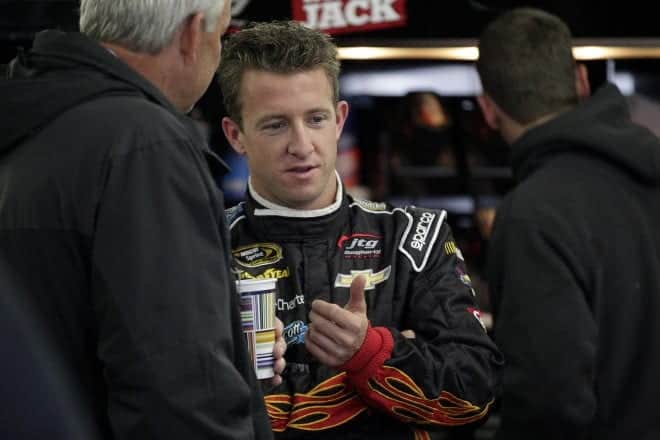 High Point: AJ Allmendinger‘s first full season behind the wheel of the No. 47 Chevrolet yielded a few good finishes surrounded by mostly mediocre results heading into the summer stretch. That all changed when the series headed to Watkins Glen. Knowing Allmendinger’s strength in turning both left and right, the entire organization had both road-course events circled on the schedule. After a disappointing finish at Sonoma, the pressure was on to perform and ‘Dinger clearly delivered.

The Scott Products/Kingsford Chevy did not make its way to the top of the scoring pylon until lap 61, but only relinquished it for one lap the remainder of the race. Allmendinger and fellow road-course ace Marcos Ambrose endured an epic battle in the closing laps, but the ‘Dinger prevailed, taking home his first career victory to the cheers of the crowd. An unexpected Chase berth came with it, making his team just the second single-car effort to make the Chase since its inception in 2004.

The driver put on one of the more spirited celebrations in victory lane, and even received congratulatory visits from owners Roger Penske and Richard Childress, a sign of the respect rebuilt throughout the garage.

Low Point: The Chase kicked off in a rather unimpressive fashion for Allmendinger, who recorded 22nd and 13th-place results at Chicago and Loudon, respectively. Despite the slow start, the 32-year-old was 10th in points, ahead of the cutoff heading into Dover, the final race of the first round. The Monster Mile was not kind to Allmendinger as he and crew chief Brian Burns could never quite find the handling on the No. 47. A 23rd-place finish, one where he was never a factor translated into missing the Chase by a mere two points. After the race, Allmendinger was crushed but still tried to see the bright side in the team’s accomplishments.

“I’m not going to take a moral victory out of it, because it’s disappointing but we know we are making steps in the right direction,” said Allmendinger in his post-race interview. “We are beating some good cars, but we have to keep working and get better.”

Summary: The 2014 season wasn’t necessarily the best of Allmendinger’s career from a statistical standpoint; he’d done better in stints with both Team Red Bull and Richard Petty Motorsports. Statistics, however, don’t always tell the whole story. Everyone knows his off-track problems by now, how Allmendinger’s entire career was put in jeopardy back in 2012 after failing a drug test following the Kentucky race. This past season, the eight-year NASCAR veteran officially completed his comeback.

Before Allmendinger had his setback, he was the first name many people mentioned when asked who would be the next first-time winner. On August 10th of this year, he finally came through, not only for himself but for JTG-Daugherty Racing, which also celebrated their maiden victory in their seventh year at the Sprint Cup level.

Beyond the big victory, the results for Allmendinger were not great, as his 20.2 average finish would indicate. A win and a Chase berth were certainly enough to consider 2014 a successful season for both team and driver, leading to a contract extension for the latter. The team, in their first year aligned with Richard Childress Racing saw a strong uptick in performance and has stability, combined with strong sponsorship support that should allow them to build a foundation for future success.

2015 Outlook: The No. 47 team will remain intact for 2015 as last month, crew chief Brian Burns also signed up to remain atop the pit box for another two years. A second season under the Richard Childress Racing technical alliance should also help this team take another step forward, especially on those tracks with only left turns (and there are quite a bit of those). Despite the cohesion for another year, there still is the challenge of being a one-car team in a sport where multi-car juggernauts dominate.

For that reason, expect the growth of this team to happen one step at a time as opposed to leaps and bounds. A few more top-10 finishes, potentially another road-course win and a Chase berth are possible. However, this team still has some work to do before becoming a serious championship contender. Allmendinger has proved that he is back, and the team has proved that they can win. Now, they need to take their game to the next level and run competitively on a consistent basis in 2015.