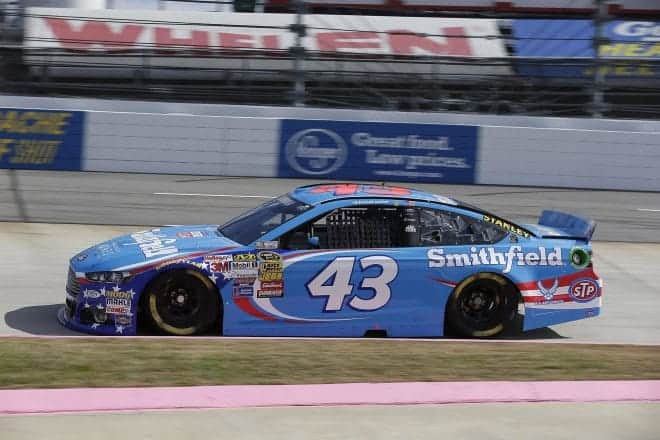 High Point: Not much of a dispute here. The high point of Aric Almirola’s season came in the Coke Zero 400 in July at Daytona, where Almirola delivered his first-ever Sprint Cup Series victory. Almirola ran up front the entire day and maneuvered his way into the lead right as a rain storm was approaching the speedway. He managed to hold onto the top spot until the rains came, and in turn captured a victory and a Chase spot in the process.

Low Point: Given that this team didn’t carry hefty expectations going into the season, it is thus difficult to really pinpoint one true low point” f the season when you consider how this team overachieved. But if I was forced to pick one, Almirola’s engine failure in the Chase opener at Chicagoland would have to be it.

Almirola was running in the top five in the race and appeared headed for a good finish, so good in fact that it would have set him up to potentially avoid first-round elimination. The engine failure however dashed such possibilities, relegating Almirola to a 41st-place finish that all but erased any hope that his team had of advancing to the Contender Round.

Summary: Almirola and the No. 43 team objectively overachieved in 2014. Almirola finished the season with his second-best average finish in his Cup career and undoubtedly had the worst postseason stat-line out of all of the Chasers. His victory at Daytona, while well-earned and well-deserved, stood out as Almirola’s only drive of the year in which he raced like a true playoff-caliber driver. He was mediocre in every other race on the calendar save for perhaps two or three intermediate track events, which he appears to a fair level of aptitude for.

All told, the No. 43 team’s Cinderella-esque Chase-run was fun to watch in 2014, but the team has a ways to go before it can be considered a yearly contender for the Chase.

2015 Outlook: Almirola has solid backing from Smithfield Foods and appears to have job security through at least 2016. With a new and very competent teammate in Sam Hornish Jr. to bounce ideas off of, it wouldn’t be unrealistic to think that Almirola’s team could see some improvement in 2015. While a repeat Chase run seems unlikely, a few more top fives and a higher average finish seem like realistic expectations for the No. 43 bunch in 2015.