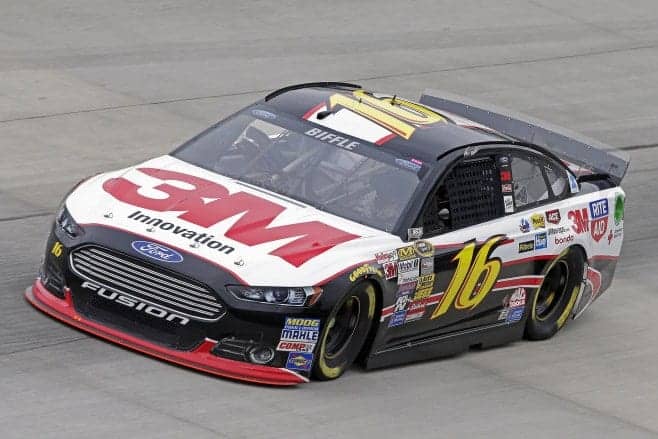 High Point: Squeaking his way into the Chase for the Sprint Cup in one of the three slots set by points (Ryan Newman, Matt Kenseth and Biffle). The fact that Biffle, Matt Puccia and the No. 16 team had an average finish during the 2014 campaign of 16th, including only three top-five finishes and zero wins, and still made an appearance in the newly revised Chase is simply astonishing.

Low Point: The Chase. Biffle stayed consistent, flying under the radar at all the wrong times during 2014, including in the Challenger round of the Chase for the Sprint Cup. At New Hampshire, the No. 16 machine finished 16th, 21st at Dover and 15th at Kansas. That’s not nearly enough strength at the critical time when Biffle needed to flex his muscles on the track and get up in front of the pack.

Securing just a single top-five finish would have possibly saved his chances of advancing to the Contender round, and although the No. 16 was a weak team in 2014, would have given the team some larger building blocks and confidence going into the offseason. A strong finish to the season helps not only the driver and team morale, but also sponsorships, something that Biffle has seemingly never had any issues with until this year losing his longtime sponsor in 3M.

Summary: There is no question that 2014 was not kind to Biffle and the Roush Fenway No. 16 team. A slew of inconsistent finishes and mostly middle of the pack racing all season led to a short-lived Chase birth and an end to the season with a zero in the win column. In total, Biffle has now made seven career appearances in the Chase, tied for fifth most all-time in this modern Championship era.

But 2014 really painted a new picture for Greg Biffle’s future at Roush Fenway Racing, with the rumor mill churning this summer as both teammate Carl Edwards‘s and Biffle’s contacts were due to expire with a new pack of young drivers in Ryan Reed and Chris Buescher waiting in the wings down in the NASCAR Xfinity Series program. Although he has a newly-inked contract, if Biffle doesn’t improve in 2015 you have to wonder if his time at RFR may be cut short.

2015 Outlook: Next season Biffle and the No. 16 RFR team will look to rebound from an unfortunate ending to an overall lackluster season of ups and (mostly) downs for the 44-year-old veteran driver from Vancouver, Wash. For the 2015 campaign the No. 16 car will have a new primary sponsor on board in Cheez-It Brand and Kellogg’s Frosted Flakes. Both sponsors, which were formerly with Edwards, announced that they will join Biffle at the No. 16 team back in August.

For the first time in his Sprint Cup career, Biffle will not have the 3M brand onboard his Ford, as the sponsor chose to bring their marketing dollars over to Hendrick Motorsports. It will be interesting to see how that sponsorship deal pans out and how Biffle transitions to representing the Cheez-It/Kellogg’s brands in 2015 after such a beneficial tenure with the two brands and Edwards.