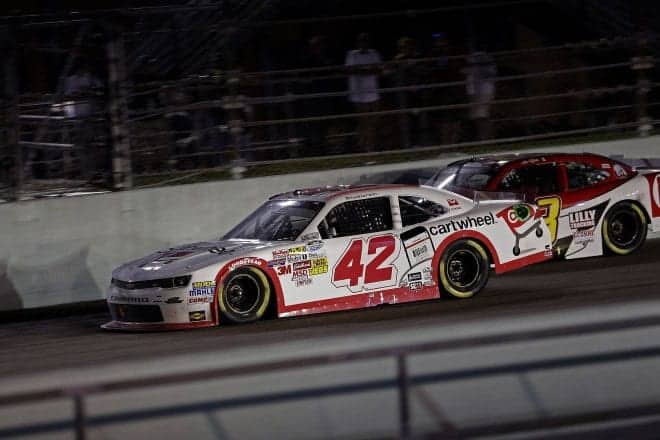 It appears that the spat between Harry Scott, Jr. and Steve Turner that threw much of the 2014 season up in the air is now over.  Turner is now out of the picture, but Scott still needed some cooperation in order to continue running the operation.
In two separate announcements on Thursday, the future of what was once Turner Scott Motorsports was revealed.  First, the Nationwide organization will now be known as HScott Motorsports with Chip Ganassi.  The team will contract to one entry, the No. 42 Chevrolet, which will compete full-time in the XFINITY Series out of the Chip Ganassi Racing with Felix Sabates Sprint Cup shop.  A variety of drivers will drive the car during the season.  The only two drivers who were explicitly named in the press release Thursday were Kyle Larson and Dylan Kwasniewski.  In addition, Mike Shiplett has been named the crew chief of the No. 42, replacing Scott Zipadelli.
Scott is very happy to get Ganassi involved with the XFINITY Series team.
“The HScott Motorsports with Chip Ganassi partnership formalizes a relationship that has been in the making for a couple of years,” Scott said in a press release.  “This is a first step of a partnership that will further develop drivers and provide even more excitement in the NASCAR XFINITY Series.”
Chip Ganassi is very happy to officially be back in the XFINITY Series.
“We have had a great relationship with Harry [Scott, Jr.] over the past couple of years and bringing this program into our shop is something that we feel benefits both teams,” Ganassi said in a release.  “We feel that our expertise on both the competition and the business side can help grow the program both on and off the track.”
Ganassi previously fielded full-time teams in the now-XFINITY Series from 2004-2008.  Reed Sorenson was the organization’s primary development driver in that time.  However, the team fielded cars for a number of Cup drivers and developing racers such as Bryan Clauson as well.
Scott’s race team will continue their involvement in the K&N Pro Series through a second joint venture, this one with part-time racer and full-time business owner Justin Marks.  HScott Motorsports with Justin Marks will continue to field four full-time entries in the K&N Pro Series East in 2015.  The driver lineup will see significant changes, though.  Scott Heckert, who won at Watkins Glen International and Virginia International Raceway in 2014, will return for a second year in the No. 34 Chevrolet.  He will joined by three rookies.  Those rookies are Dalton Sargeant, J.J. Haley and William Byron.
Haley, who is only 15 years old, made his ARCA Racing Series debut for Venturini Motorsports at Toledo in May.  In six ARCA starts, Haley had one top 5 (third at Elko Speedway), three top 10’s and a pole (Elko).  Haley also started four K&N Pro Series races (three East races and one West race).  Haley’s best finish in the K&N Pro Series was a seventh in the East Series finale at Dover.  Byron and Sargeant are both late model racers, the former of which drove for JR Motorsports this past season.  Sargeant recently finished second to John Hunter Nemechek in the annual Snowball Derby at Five Flags Speedway.
Team co-owner Justin Marks is very happy to get into NASCAR team ownership.”It’s a thrill for me to be able to partner with someone like Harry on this enterprise,” Marks said in a press release.  “This organization has proven to be a significant strength in the NASCAR K&N Pro Series and I am looking forward to continuing that success.  We have a stable of talented drivers for 2015, backed by a group of hard working and dedicated team members.”
Sargeant is very excited to make the move up to the K&N Pro Series East.”I couldn’t be happier to join this esteemed organization and compete in the NASCAR K&N Pro Series,” Sargeant said.  “These past six months have all been dedicated to preparing myself for the next level in stock-car racing, which will be in the ultra competitive NASCAR K&N Pro Series East.  I’ve been watching the series and the graduates for a long time and it’s definitely the best proving ground and platform there is.  If we can be competitive and put ourselves into positions to win races in that caliber of series, it would be a really big accomplishment.  It was always a big goal to compete in a NASCAR series so I’m going to wear that patch on my firesuit proud.  Couple that with Mike Greci and the great people at HScott Motorsports and the new partnership with Justin Marks is all really exciting.  There’s still a lot of work to do before we go racing, so we’ll get down to business immediately and come out strong in 2015.”

Greci, as Sargeant mentioned in his statement, will remain in his supervisory role overseeing the K&N Pro Series program.  The 2015 schedule has not been released as of yet.  However, the series has already announced a return to New Smyrna Speedway in Florida, where the 2014 season began as part of the World Series of Asphalt.

No reference was made to the organization’s Camping World Truck Series operation in the announcements.  That team had two full-time teams in 2014 with Ben Kennedy in the No. 31, while a number of drivers shared the No. 32.  Ron Hornaday was in the No. 30 until the infighting between Scott and Turner led to the team being parked despite being fully funded.