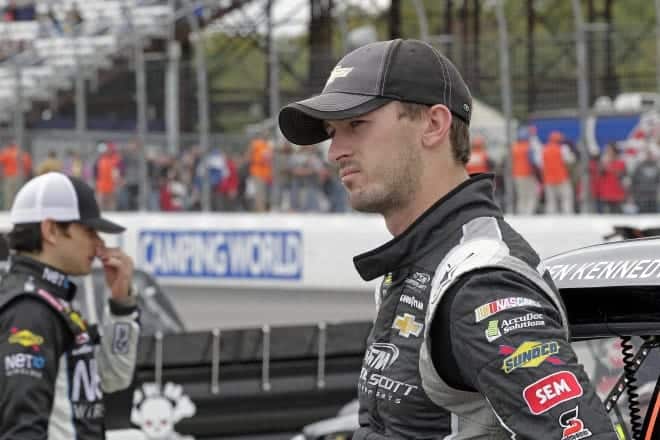 2014 Truck Series Rookie of the Year, Ben Kennedy, will be switching teams for his sophomore season. The driver announced a partnership Wednesday with Red Horse Racing, one that will put him behind the wheel of their No. 11 Toyota full-time for 2015.

RHR co-owner Tom DeLoach announced Kennedy’s signing on the heels of Turner Scott Motorsports‘ closure. TSM, who employed Kennedy in 2014 has sold the last of their equipment after financial difficulties, combined with an ownership squabble left them unable to field a program for 2015.

That left Kennedy on the market following a successful freshman season in Trucks. The nephew of the sport’s CEO, Brian France, Kennedy proved his worth as a driver with one top-5 finish, seven top 10s and 17 lead-lap finishes in 22 starts. Running a career-best third at Martinsville, one of the series’ more difficult tracks he was ninth in the final standings despite limited sponsorship.

Now, Kennedy will reboot with an RHR program that’s been highly successful. Team owner Tom Deloach, who has 13 career victories in the series is highly confident Kennedy can add to the list, teaming him with longtime veteran Timothy Peters.

“We are thrilled to have Ben (Kennedy) join us at Red Horse Racing,” he said. “Ben is a very talented young driver, and I think he is going to fit right into our Red Horse family. We consider ourselves one team with multiple trucks, and I expect to see a lot of success from this organization in 2015.”

Deloach announced that Kennedy would replace German Quiroga for next season as the team remains running just two full-time Trucks. Quiroga, who drove the No. 77 will not return as funding for 2015 did not materialize. Brian Ickler, which had driven a limited schedule for the program could resurface next season in a third Truck part-time.