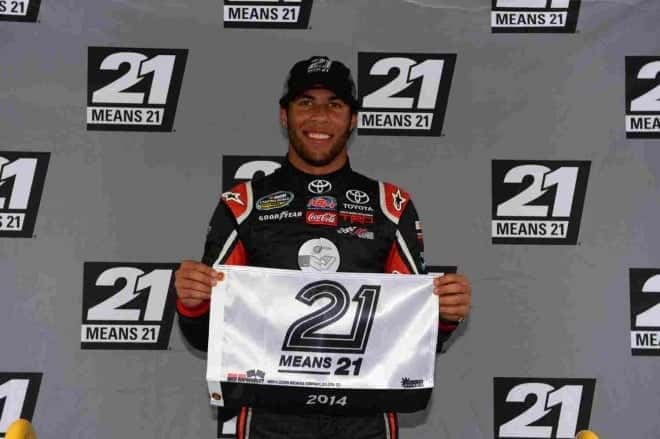 After being granted his release from Joe Gibbs Racing less than two weeks ago, Darrell Wallace, Jr. has a new home. The 21-year-old signed a deal Thursday to pilot the No. 6 Ford Fusion for Roush Fenway Racing in the NASCAR XFINITY Series in 2015. Wallace is expected to race full-time for the organization, but sponsorship is still being finalized.

“I’ve had a remarkable journey over the last few years thanks to people who have put me in a position to win the races that I have,” said Wallace. “When I first joined the sport, many said I would never compete with the real drivers. Now, as I join the winningest team in NASCAR history, I take that as a responsibility to add more wins to the team’s legacy and help tear down the barriers for the next generation of NASCAR drivers.”

In 2014, Wallace won four races in NASCAR’s Camping World Truck Series with Kyle Busch Motorsports. Signed under a developmental contract with Gibbs, the Drive for Diversity graduate raced two full-time seasons in the Truck Series. Third in the points last season, he’s the first African-American driver to find victory lane in NASCAR since Wendell Scott more than 50 years ago.

Originally, the plan was for Wallace to move up into the XFINITY Series, joining Daniel Suarez at Joe Gibbs Racing in hopes of winning the Sunoco Rookie of the Year title. But after team executives struggled to find funding, promising only a partial schedule Wallace asked for and was granted his release.

“We are very excited to bring Bubba Wallace into the Roush Fenway fold,” said team president Steve Newmark. “He is viewed in industry circles as one of the brightest young drivers and I feel that we are very fortunate to be able to bring him on board.  He has a charismatic personality and, at the same time has exhibited the ability to win.  We are looking forward to getting him in our race cars next season.”

RFR, while holding off on sponsor announcements is prepared to run him for what appears to be the full season. Financial backing will determine Wallace’s schedule, according to multiple reports from the Sporting News’ Bob Pockrass. After fielding Chris Buescher’s car out-of-pocket, running Roush Performance Products on it for the majority of the 2014 season RFR has proven they’re willing to invest in young talent when necessary.

The signing means Roush Fenway Racing’s XFINITY Series team will expand to four cars in 2015. Buescher, Wallace, second-year driver Ryan Reed and veteran Elliott Sadler, who also made the swap from Gibbs will fill out the roster.

“We are certainly pleased to have Bubba Wallace come on board,” said team co-owner Jack Roush.  “He is certainly a great young talent and I feel it will be mutually beneficial for us to be able to put him into a team environment with a veteran driver like Elliott (Sadler) and young guys Chris Buescher and Ryan Reed. We have had a great deal of history in the NASCAR XFINITY Series and we are happy to have Bubba as the latest piece of that rich legacy.”

While it’s good that Wallace was able to secure a ride for 2015, going to Roush-Fenway was a very bad move. This organization does not have the engineering talent to produce competitive cars. Wallace will be an also-ran, maybe a 15th place car at best. Too, I’m not buying the “no sponsorship” claim by Gibbs. Lets face it, Gibbs is as big a phony sleazebag as that convicted felon Hendrick. He needed that third XFINITY car for Edwards, since he seems to only want his Cup drivers in those second level cars.

I agree with Ken on Gibbs but disagree on Roush. Last year all three Roush-Fenway Nationwide cars were in the top 10 in points and Trevor Bayne had a lot of top 10 runs in the 6 car. With the additional changes Roush is making in it’s engineering for 2015 I think Wallace will be very competative. I’m not sure why Gibbs and toyota gave up on Wallace but they gave up on Joey Logano too and he looked pretty good in a Ford last year. As a Ford fan I am happy and excited to see what Darrell Wallace can do.

Finishing in the back half of the Top 10 in points in a series where there at best 12 teams that can even consistently finish races on the lead lap is not a terribly strong selling point.
Ryan Reed, who finished 9th in the standings for Roush, had one top-10 finish.
That being said, if the goal of any driver is to make it to Cup, there is a potential path at Roush when you look at their 2015 Cup lineup compared to Gibbs. If Stenhouse Jr. starts another season running 25th every week, all bets may be off. I think Elliott Sadler saw the same thing in a last-ditch effort for a Cup ride, although signing of Bubba Wallace may have hampered that.

Well, if anything, it will be fun watching Bubba try and carry the car on his back.