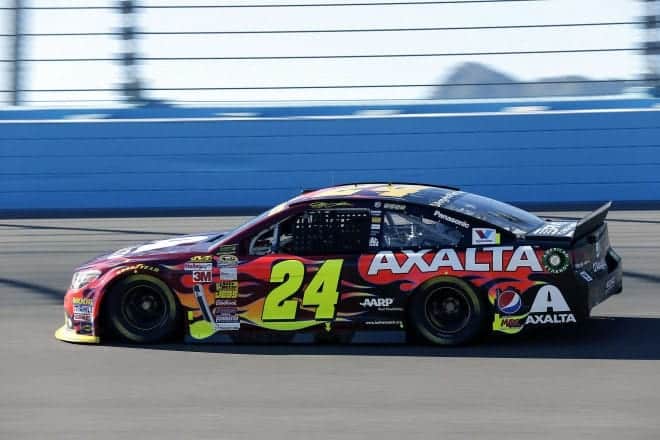 High Point: The win at Indy: Gordon won the inaugural Brickyard 400 in 1994 in his home state of Indiana. 20 years later he not only joined Michael Schumacher as the only drivers to win five times at Indianapolis, he notched his 90th Sprint Cup win and firmly seated himself as one of the drivers who should be looking at hoisting the Cup at the end of the 2014 season. It wasn’t just the win itself, but the manner in which he took home the hardware — with 17 laps to go he beat out Kasey Kahne on the restart.

A restart! Those had been the bane of his existence all through the 2013 season, he just couldn’t seem to burn rubber when it mattered last year. However, this year by slipping past the No. 5 at Indy, the No. 24 firmly put November in his sights as not only was his Chevy a true muscle car for the long runs this season, but Gordon finally mastered restarts in the latest iteration of their Gen 6 car.

Low Point: The Phoenix Chase race. Or more specifically, the last lap of the race. Gordon had done all he possibly could do to make it into the Final Four. He had won four races this season, his stats were as good as his best Championship years — better than some. His car was near bulletproof. They had the team to take to Homestead.

But it didn’t matter. Ryan Newman shoved his way past Kyle Larson on that last lap and nudged Gordon out of the transfer spot. Newman — who hadn’t won a single race and barely had what you could call a playoff-caliber team. He was going to run for the gold and the No. 24 wasn’t.

That was a bitter day, indeed.

Summary: The No. 24 Drive to End Hunger Chevy started 2014 showing all the determination and speed it takes to win a Cup, grabbing a second in the Duels and finishing with a strong fourth place for the Daytona 500. Week after week, Gordon and Alan Gustafson showed up at the track and performed as champions. Instead of stumbling during each race, as he has in years past when the elusive fifth Cup was not anywhere in sight, this past year saw Gordon leading or nipping on the heels of the leader almost every week – adding over a thousand laps to his laps led career column.

Instead of sporting a few more grey hairs, Gordon appeared to find his fountain of youth, first arriving in victory lane at Kansas in May. After guaranteeing his starting spot in the new-fangled Chase, he simply got faster and happier as the summer progressed adding trophies from Michigan and Indianapolis to his collection.

Where 2013 and clusters of cautions truly challenged Gordon’s mastery of short runs and restarts, 2014 presented his team with the opportunity to make the most of what the No. 24 loves – loose cars and long runs. He remained on the top of the points standings once he snared first at Texas in the spring, and hung on throughout the summer except for two short weeks. He truly seemed destined to add to his pile of Cup hardware.

But NASCAR threw a wrench in Gordon’s golden year with the new Chase format.

He sailed through the Challenger round by taking his fourth victory of the season at Dover. However, in the Contender round Talladega acted as the great leveler that everybody feared it would be. Yes, Gordon squeaked through to the Eliminator round with his 26th-place finish, but drama was not over. He chased Dale Earnhardt Jr. to the checkers at Martinsville, apparently setting the No. 24 up for an easy stroll through Texas and Phoenix. Brad Keselowski had other ideas.

At Texas, fellow Chaser Keselowski tried to thread a disappearing needle between Gordon and Jimmie Johnson late in the race. After contact with the No. 2, the No. 24 ended up spinning and finishing a lap down. Now his hopes of moving to the Championship round were precarious thanks to Bad Brad.

Gordon decided to tell the youngster what he thought of his on-track antics, and the fans were treated to a post-race brawl involving many members of multiple teams. TV crews had a hard time focusing on victory lane interviews. The end of Gordon’s season, despite any laps logged at Homestead, were finalized at Phoenix when Newman drove Larson into the wall, snagging the spot on the track needed to bump Gordon out of the final four.

After driving a near-perfect season, the No. 24 was left out of the championship race due to the desire of other drivers (Keselowski and Newman) to run over anybody in their path – something that Gordon did not wish to have attributed to his fifth championship.

Thus the question lingers: Was the new Chase format rewarding bad behavior or was it designed to generate the kind of racing that NASCAR has often called its own brand of excitement, involving nothing but bravado and bent fenders? Something we will be pondering for some time to come, and one Gordon will have to answer if he truly wants to add that fifth Cup to his mantle.

2015 Outlook: If you’re looking for Jeff Gordon to retire because he’s on the other side of the big 4-0, look again. The storied veteran is not quite done adding to his future Hall of Fame stats sheet. He’ll be returning with all the familiar faces in 2015 (Alan Gustafson is expected to re-sign) and adding 3M as a major sponsor for 11 races. With 2014 being one of his most dazzling seasons in quite some time and loads of momentum in his corner, Gordon Nation ought to believe that the Drive for Five is Still Alive.

So interesting. this day they reviewed Logano, Kes and Gordon. Those names should have been contending for the Championship as they were the best all year..too bad all year doesn’t mean a thing, despite the fantastic things these teams did consistently all year. As time goes on what an insult that when looking at “stats” Hamlin and Newman will be before Logano, Kes and Gordon and their actual “stats” based on a season long tally weren’t even close. So silly this damn format. Screwed good team.

@kb, I’ve been trying to figure out how the explain this year’s standings to someone 20 years from now.
There are not enough asterisks to put after Newman and Hamlin’s names.
One month has passed and I still have a bad taste in my mouth from seeing the 11 and 31, who had spent the better part of 35 weeks being in the way, all of sudden having Top 5 cars for almost the entire Homestead race.
Some day, the story of what NASCAR told the other 39 drivers pre-race that day will come out.
Briefly to Gordon, I would like to see him make another run in 2015. Frankly, I’d be quite impressed if it happened because I think the way 2014 went down took a lot out of him and that team. This should have been his if not for the lottery that was the Chase. Knowing the season that team had and seeing him 6th in final, official standings is beyond insulting.

..well said. I was looking around at what others said in their “year in review”, and the stupidity of how it went “wrong” for a driver always came down to one race..ONE RACE and it always ended with them not being in “The Chase” at some 3 race reset. Many of these teams had great years, for what? One race. This version of the idiotic “Chase” did just the opposite of what it was purported to do.

Gordon had a great season. Obviously as a big fan of his, I was disappointed about this idiotic version of the chase and how it affected Gordon in particular.

NASCAR and the media who feeds off of the France family may love the crapshoot, but I don’t. Overall Gordon’s stats for the season (and career) were far better than Newman, Hamlin and Logano and yet he finished lower in the points.

I’ve been saying for several years that I just don’t care about NASCAR as much as I once did and every year, I care a little less. I’ll follow along as long as Gordon is on the track, but I consider myself a casual fan at this point.

…you forgot Harvick….before the final flag dropped at Homestead he was behind Gordon and Logano and Brad.