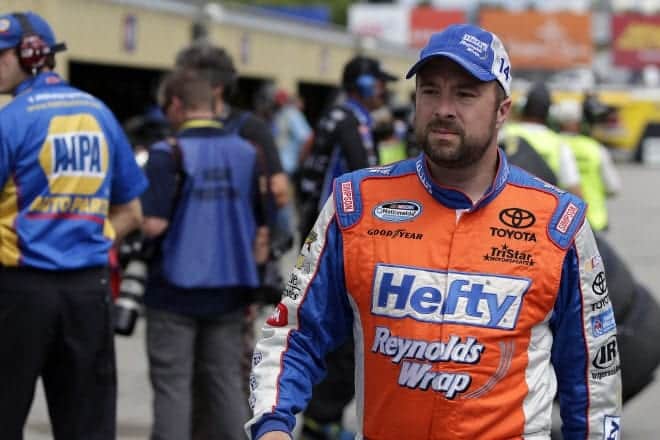 On Monday morning, Team McClure Inc. announced that Eric McClure will leave TriStar Motorsports and move over to JGL Racing for the 2015 XFINITY Series season.  McClure is bringing primary sponsorship with him from Hefty and Reynolds Wrap for 25 races at minimum. continuing a long-term relationship between the company and the Virginian racer.  JGL Racing is continuing to search for sponsorship to fill out the rest of the season on McClure’s No. 24 Toyota.
McClure has not driven a full season in the now-XFINITY Series since 2011.  Since then, health issues have taken a toll on the Virginia native’s career.  A concussion suffered in a big crash on the backstretch at Talladega put him out of the seat for five races in 2012.  Renal failure forced McClure to the sidelines for four races in 2013.
In 2014, McClure ran the vast majority of the races in the No. 14 Toyota for TriStar Motorsports, but intentionally took five weeks off during the season.  2000 series champion Jeff Green drove in McClure’s place during those events.  In his 28 starts, McClure had a best finish of 17th at Talladega in May and finished 19th in points.  In addition, McClure brought his Hefty sponsorship to Front Row Motorsports and attempted two Sprint Cup races in the No. 35 Ford Fusion.  McClure failed to qualify for both of those races.
In 2014, JGL Racing fielded two teams in the then-Nationwide Series, the Nos. 28 and 93.  The No. 28 was driven primarily by Mike Wallace and JJ Yeley.  Yeley had one top 5 finish (a fifth at Road America) and an additional top 10 finish at Talladega.  Wallace had a tenth-place finish at Daytona in July.  Yeley finished 17th in points splitting time between both cars.  Both teams managed to finish in the top 30 in owners points at the end of the season.