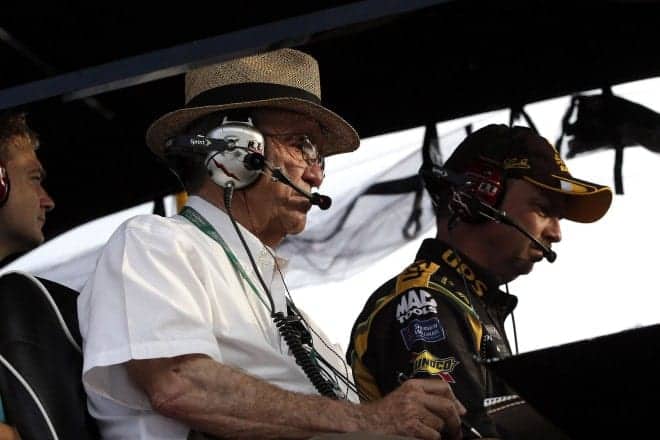 On Tuesday morning, Roush Fenway Racing announced the driver-crew chief pairings for their three full-time Sprint Cup and four full-time XFINITY Series teams.  The organization will have a combination of brand new and familiar atop their pit boxes.

Starting on the Sprint Cup side of the organization, Greg Biffle will once again have Matt Puccia as his crew chief.  The two have worked together since the middle of 2011 and have made the Chase the last three seasons.  For the new No. 6 AdvoCare Ford that Trevor Bayne will drive in a Rookie of the Year, Bob Osborne will come out of crew chiefing retirement to man Bayne’s pit box.  Osborne had spent the previous two seasons working in Roush Fenway Racing’s Engineering department.

Third-year driver Ricky Stenhouse, Jr. will have a brand-new crew chief in 2015.  That man is Nick Sandler, who will make his debut as a crew chief at Daytona in February.  Most recently, Sandler served as the lead engineer on Carl Edwards’ No. 99.  Sandler will replace Mike Kelley atop the pit box.  Kelley will remain with the No. 17 team, serving in the car chief role.

Team co-owner Jack Roush is confident that the driver-crew chief combinations will lead to success for the organization, now entering its 28th season in NASCAR.

“We are excited about our 2015 crew chief lineups,” Roush said in a press release.  “Much like our driver lineup, our crew chief assembly features a quality mix of veteran leadership and youthful insight. We feel this lineup, combined with the addition of Kevin Kidd to oversee our Sprint Cup efforts, is a big step forward in the direction of placing our teams up front and contending week-in and week-out.”

In the newly-named XFINITY Series, there is less turnover.  Scott Graves will continue as crew chief of Chris Buescher’s No. 60, while Seth Barbour will head up Ryan Reed’s No. 16 team.  Chad Norris, who served as Bayne’s crew chief on the No. 6 last season, will retain that role with Rookie of the Year candidate Darrell Wallace, Jr.

The only new name in the mix will be with the No. 1 OneMain Financial-sponsored team.  For Elliott Sadler’s first season with Roush Fenway Racing, he will have Phil Gould as his crew chief.  Most recently, Gould was the crew chief for Brian Scott’s No. 2 Shore Lodge Chevrolet at Richard Childress Racing.

Finally, Jimmy Fennig, who retired as Carl Edwards’ crew chief at the end of the 2014 season, will remain at Roush Fenway Racing in a new role as Research and Development Coordinator.  Here, Fennig will oversee the development of new chassis technology.

“I am personally excited to have Jimmy in this new role,” Roush continued.  “Jimmy’s experience is unparalleled in our sport and I anticipate his input in this new role will have a major influence in a positive direction across the board with all of our team’s going forward.”

With testing banned, the first chance to see these new driver-crew chief lineups will be when practice opens at Daytona International Speedway on February 13th.

Big step forward. You lose Carl Edwards and are left with:
– The oldest full-time driver in Sprint Cup who made the Chase only because he benefitted from Lucky Dogs and wave-arounds more than similar mediocre drivers
– A driver who is more known for his girlfriend and led as many laps as I did last season
– A driver who underwhelmed in the Nationwide Series and has milked winning the Daytona 500 for four years

Long ago are days when this team would show up to tracks like Las Vegas, Texas, Michigan, and Fontana and it was just a matter of which Roush driver would win.