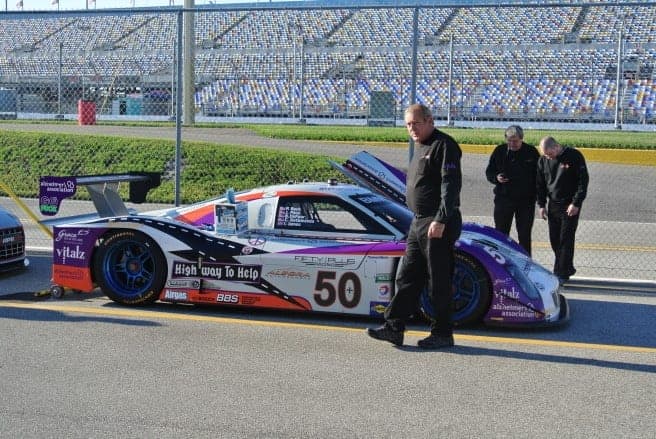 On Saturday morning, the No. 50 BMW Riley DPG3 driven by Byron DeFoor for Fifty Plus Racing suffered a massive crash in the tri-oval at Daytona International Speedway while testing for the upcoming Rolex 24 at Daytona.  An official from Continental Tire told SportsCar365.com that DeFoor suffered from a complete loss of right rear tire pressure in the tri-oval.

The tire failure resulted in DeFoor spinning out into the infield grass.  Once there, the Riley chassis lifted off the ground and came back across the track, eventually making contact with the catchfence exiting the tri-oval.  The No. 50 came to rest upside down on the paved portion of the apron between the entrance and exit of the infield section of the course.

Update: RACER Magazine has posted video of the crash from a GoPro mounted on the DeltaWing to YouTube.

DeFoor was able to get out of his car with assistance from the first responders on the scene.  He was taken to the Infield Care Center.  According to IMSA, DeFoor was evaluated and released after being declared ok.

The morning testing session was cut short due to the crash and the need to inspect the catchfence for damage.  The fence was not significantly damaged and testing was able to resume at the beginning of the next session.

This is not the first time that tire issues have resulted in spectacular crashes at Daytona for Daytona Prototypes.  In testing back in November 2013, Richard Westbrook had a major failure at the fastest point of the tri-oval.  The result was similar in which Westbrook’s No. 90 Spirit of Daytona Chevrolet Corvette DP Evo spun, got airborne and rolled.  Westbrook walked away from the crash, but the car was thrashed.

Later that afternoon, the No. 5 Chevrolet Corvette DP Evo driven by Jõao Barbosa also suffered a right rear tire failure on the backstretch.  Barbosa spun and got airborne as well before coming back down on all fours.  In response to the incidents, IMSA grounded all prototypes for the remainder of the test session.

The Roar Before the 24 testing continues through Sunday.  We’ll have a wrap-up of the testing in Monday’s edition of the Frontstretch Newsletter.