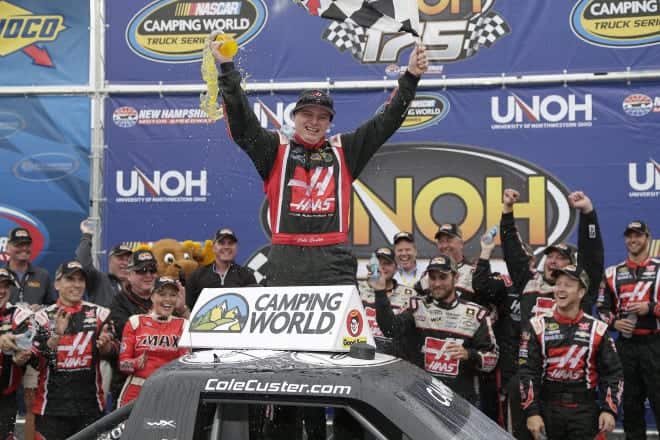 The 2014 NASCAR Xfinity Series championship winning organization is making a part-time move to the NASCAR Camping World Truck Series during the 2015 season.

Cole Custer, 16, will be making the move to JR Motorsports this season in the No. 00 Haas Automation Chevrolet.

Custer, who raced for Haas Racing Developments in nine races during the 2014 Truck Series season, won at New Hampshire to become the youngest winner in the division’s history. Throughout those nine contests, he earned six top 10s and won two poles.

“I’m so excited to get this season started,” Custer said in a team press release on Monday morning. “With all that JR Motorsports has accomplished over the past few years, we know we have everything needed to go win races and compete.  I couldn’t ask for a better opportunity with a better organization.  I really want to thank Haas Automation, along with Kelley and Dale Jr. for putting this deal together.”
The California native has run just one full-time season in the NASCAR K&N Pro Series East, finishing eighth in points with two victories during the 2013 season. 2014 featured a handful of races in the East and West divisions, including triumphs at Phoenix for the K&N Pro Series West season opener and at Richmond.
Joe Shear, Jr. will continue to help Custer develop in NASCAR’s third-tier division. The veteran crew chief worked with Custer in 2014, and has nine wins in 157 starts at the top of the pit box over the course of 10 years.
The soon-to-be 17-year-old will run 10 events for JR Motorsports, which includes events at Martinsville (March), Dover (May), Gateway, Iowa (June), Eldora, Bristol (August), Canadian Tire Motorsports Park, New Hampshire, Martinsville (October) and Phoenix. Besides his 10 events in the Truck Series, Custer will  also make his ARCA  Series debut at some point during the 2015 season. He will run a number of races in ARCA, along with the K&N Pro Series, which is still being determined.
“This is a new and exciting venture for us,” said Kelley Earnhardt Miller, general manager of JR Motorsports.  “We have come a long way since racing street stocks in 2002, and we are constantly evolving.  Expanding into the truck series on a part-time basis is furthering our growth.  Bringing in a talent like Cole and a great partner like Haas Automation is a great way to do that.  I’m proud of the direction we’re heading.”
Sign up for the Frontstretch Newsletter