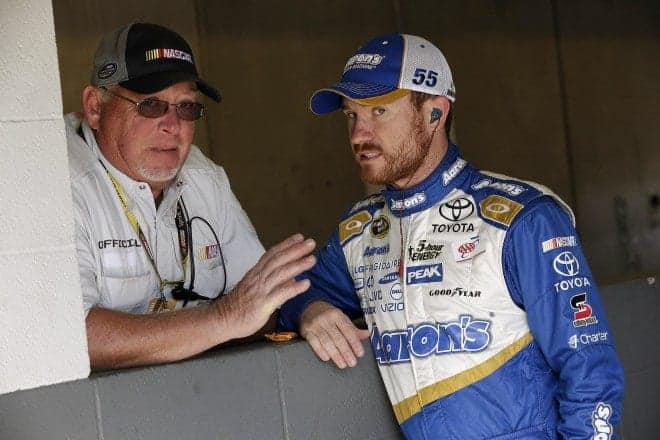 On Wednesday, Michael Waltrip Racing (MWR) announced that Brian Vickers has officially been cleared to return to the driver’s seat starting at Las Vegas Motor Speedway in March.  He will miss the first two races of the 2015 Sprint Cup Series season while he continues to recover from a surgical procedure on his heart back in December.

“I was not feeling well in December, so I went to see Dr. William Downey in Charlotte,” Vickers explained.  “He discovered [that] my body was rejecting a patch that was surgically placed over a hole in my heart a few years ago.  He and Dr. R. Mark Stiegel immediately went to work on correcting the problem.”

With the medical interventions completed, Vickers’ focus is back on racing.

“The doctors gave me a clean bill of health and said I will be better than before,” Vickers continued.  “Now all of my focus is getting ready so when I return, we are prepared to win races and the championship in my Aaron’s Dream Machine.”

In regards to potential Chase eligibility, Vickers will still be eligible to qualify for the 2015 Chase for the Sprint Cup despite missing the start of the season.

“With the clearance from his physicians, Brian Vickers has satisfied all necessary NASCAR requirements to resume racing on March 5,” NASCAR Executive Vice President & Chief Racing Development Officer Steve O’Donnell said in an official statement.  “Further, NASCAR has reviewed the circumstances surrounding his situation and has determined that he will maintain Chase for the NASCAR Sprint Cup eligibility despite neither entering nor attempting to qualify in the first two championship events, provided he meets all other necessary eligibility requirements.”

MWR has announced that team co-owner and namesake Michael Waltrip will drive the No. 55 Aaron’s Dream Machine Toyota in the Daytona 500.  The team has not named a substitute for the Folds of Honor QuikTrip 500 at Atlanta Motor Speedway at this point, but plans to in the near future.