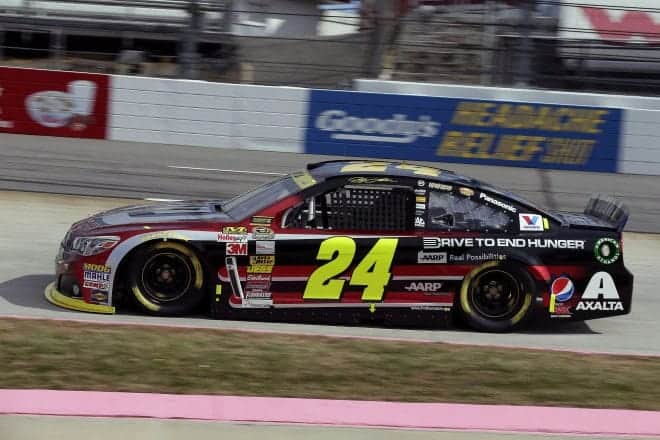 Welcome to the Frontstretch Five! Each week, Amy Henderson takes a look at the racing, the drivers, and the storylines that drive NASCAR and produces a list of five people, places, things, and ideas that define the current state of our sport. This week, Amy has five reasons why Jeff Gordon‘s legacy among the greats is cemented.

Any way you slice them, Gordon’s stats are the stuff of legends. His 92 wins are good for third on the all-time list, made all the more impressive because they were recorded in the sport’s modern era. Yes, Richard Petty and David Pearson have more; however, their totals grew when drivers could choose a midweek race with little real competition to pad their records. It’s unlikely that another driver, in this Chase age of NASCAR will eclipse that 92-win number anytime soon. Next in line among still-active drivers is Jimmie Johnson, sitting more than 20 wins behind Gordon and ready to turn age 40 in 2015. For three years in a row, 1996-98, Gordon posted double-digit victories. If you weren’t a diehard fan, you probably hated Gordon because, face it, he was beating your guy along with everyone else on a highly-competitive, 43-car grid of well-funded cars.

Only three drivers have more titles than Gordon, and that number is, to many, debatable because the Chase changed the way the title is determined. Gordon has earned the most points in three seasons (including 2014) where the most points over a full slate of races did not determine the champion, as it did when he was winning his four Cup trophies. Gordon was once considered a safe bet to match the seven championship mark of Dale Earnhardt, Richard Petty and perhaps, had the points system remained unchanged, he would have. Gordon doesn’t need the additional titles, though to prove his place among the sport’s greats, because everything else he has done makes him a surefire Hall of Famer on his first ballot.

2. He’s been a threat anywhere, any time.

Gordon ran Cup races on 25 different tracks in his 23-year career… and he’s won on 24 of them. Only Kentucky Speedway has eluded Gordon, and the series has only visited that intermediate oval four times. He is (or has tied) the most wins by an active, full-time driver at Atlanta, Bristol, Darlington, Daytona, Indianapolis, Kansas, Martinsville, Pocono, Sonoma and Talladega. No driver, at any track on the circuit could take anything for granted as long as Gordon was a competitor in the race.

3. And he sure could dance with the Lady In Black.

Among the ten tracks where Gordon is the active win leader, perhaps the one with the toughest reputation is Darlington, a track where many great drivers have been stymied by its rough surface and uneven turns. Five of his seven wins at Darlington were in the Labor Day weekend Southern 500, then an afternoon race considered extra-difficult because of the slick surface burning under the South Carolina sun. The Southern 500 was the race to win at one time, second only to the Daytona 500 in prestige, and in the mid-1990’s, Gordon owned it. His door-to-door battle with Jeff Burton for his fifth Southern 500 in 1998 is a classic. Gordon remains the only driver to win the race three times in a row.

4. He’s got a million reasons.

From 1985 to 1997, NASCAR title sponsor Winston offered a bonus to any driver who could win three of the sport’s four “crown jewel” races: the most prestigious (Daytona 500), the longest (Coca-Cola 600), the fastest (Winston 500 at Talladega), and the oldest (Southern 500). The payout was a cool million dollars, but entering 1997, only Bill Elliott (’85) had managed to pull it off.

Gordon opened that year with a win in the Daytona 500 but finished fifth in the Winston 500. He rebounded in the Coca-Cola 600 at Charlotte, emerging victorious and setting himself up for a run at the million in September. Gordon didn’t disappoint; he took the Southern 500, surviving a thrilling late-race battle with Jeff Burton to snatch the bonus and cement his legacy. He was the last driver to win the Winston Million, too as it was replaced with another bonus program in 1998.

Gordon’s legacy extends beyond the driver’s seat. Prior to his arrival, NASCAR’s big names were anything but corporate. They were blue-collar, brash and not always known for their PR skills. Gordon was different, changing the way the sport was perceived through his emergence in the mid-1990s. Though he’d raced since he was five years old, Gordon projected a different image: clean-cut, emotional, well-spoken. He was good with sponsors at a time when the way drivers competed within the sport was changing. It wasn’t just about winning races anymore; it was about representing the company, becoming the whole package as his backers became more high-dollar and bigger companies got involved. Drivers like Gordon were the whole package, a Fortune 500 dream off the track while winning 500-mile races on it. He and a few others helped draw more money into the sport and contributed to its economic boom. Many fans didn’t like the change, but it was hard to argue with the sport’s growing success.

As Gordon was racking up the wins and titles, ushering in a new era of sponsorship, he also successfully planning ahead. A lifetime contract with Rick Hendrick, the only car owner he ever knew in the Cup Series, was signed with co-ownership of a brand-new Hendrick Motorsports team, carrying the No. 48 to start the 21st Century. The choice of driver was largely up to Gordon, as long as he could pitch his choice to Lowe’s, who had agreed to sponsor. Gordon, along with Hendrick’s son Ricky, saw something in a mid-tier Busch Series driver. That wheelman had modest, but not wild success with a smaller team, winning once and finishing in the back half of the top 10 in points in a more competitive time for the second series. There were certainly drivers to choose from in 2001, but Gordon saw something he liked in the young driver, who politely asked Gordon for career advice during that season. Gordon told him to hang on, because there might be an opportunity, and later signed the driver to the No. 48. 13 years later, Jimmie Johnson is a six-time champion and Gordon is the owner of record for all of them, though he defers to Hendrick.

Gordon’s legacy was forged on the racetrack, where he was one of the best ever to strap into a NASCAR racecar. But he also made a mark off the track, and will do so after the checkered flag falls on his career later this year. Almost 70 years into the sport’s history, the conversation – Petty, Pearson, or Earnhardt? – becomes Petty, Pearson, Earnhardt…or Gordon. Gordon came as a kid… and he leaves as a legend.

5 good reasons indeed. NASCAR doesn’t know it yet, but they are REALLY going to miss him and his fan base.

I have such vivid memories of that 1998 race to the finish between the two Jeffs. I believe that is my most favorite finish of any race I’ve ever watched.

He definitely has matured over the years. Good article.