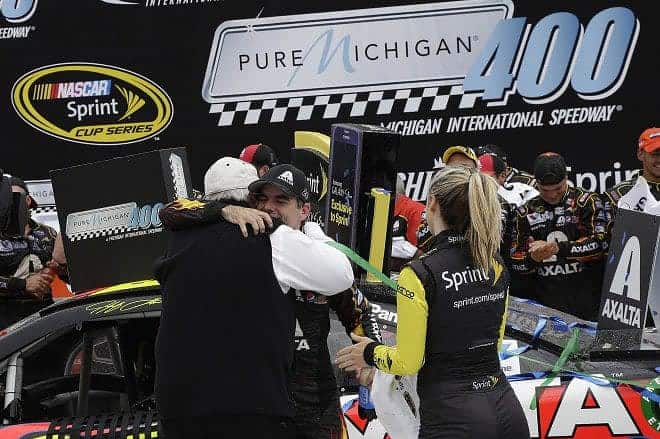 I was 11 years old in 1992 when Jeff Gordon made his Sprint Cup debut. It happened during one of the most infamous races in NASCAR’s modern era, a season-ending Hooters 500 where no Chase was needed to create a high-drama, white-knuckle battle for the championship. Six drivers entered the Atlanta race title-eligible, three failed to finish (Davey Allison, Kyle Petty, and Mark Martin) with Allison becoming an innocent victim in a mid-race wreck. Driver/owner Alan Kulwicki emerged to pull an incredible upset, taking the big trophy with his single-car team by leading one single lap more than Bill Elliott. Believe it or not, that wasn’t even the biggest story as NASCAR’s winningest driver, Richard Petty ran his final Cup Series race, catching his car on fire before driving a hoodless No. 43 around the track for one final celebration.

There was so much to ingest that day, so much NASCAR history Gordon’s spot in the record books could have been easily overlooked. He qualified a ho-hum 21st, wrecked out midway through the event and was never a factor on a day when other stories took priority. No one could have predicted what lie ahead, the same way an 11-year-old had no worries about the world other than remembering lunch on his way to school the next day.

Now, 23 years later, Gordon’s retirement marks the end of an era, emerging from the shadows to exceed expectations and accomplish goals beyond his wildest dreams. Tears marking the announcement, shown to everyone from PR reps to his daughter were those of pride, taking stock in a generation’s worth of success as he stood out in front of Hendrick Motorsports and, later, reporters on a conference call to announce what few athletes realize at their peak: it was time.

“All I could ask for is to be at this point in my career,” he explained, still fired up over a 2014 season that left him one small break from a series title. “20‑plus years in and be that competitive week‑in and week‑out, I was almost ready to walk away right then.  But I wanted to give one more year to my team, to Rick, to the sponsors, to the fans, my family and myself.  It just seemed like the timing was right to do those things and start that next chapter.”

For Gordon, that means growing up, spending time as a father in his mid-40s while enjoying a life, one outside of NASCAR Sundays that was sacrificed for stardom in his early 20s. Life, like it does for all Hall of Fame athletes keeps churning, moving, evolving.

Which is precisely why so many fans are still feeling the impact this Friday. Gordon’s impending retirement, while expected within the next few years, is a reality check for their own experiences as much as the driver himself. I had a friend within the NASCAR community, also in his early 30s, ask Thursday if there was another Hall of Famer we’ve covered, from the very first start of his career to the end. Other than Gordon, I couldn’t think of any, with perhaps the exception of late-blooming Dale Jarrett.

That’s how long the careers of drivers are, nearly twice the length of NFL running backs, NBA point guards, or the latest MLB closer of the month. It’s what part of breeds fan loyalty, becoming connected to one particular driver for decades. It’s a love that, in some ways runs deeper than a connection to a sports team. Millions feel like they grew up with Jeff Gordon, in an era where his presence connected them to NASCAR at a time where it was the “it” sport in America. That feeling is not easily replaceable, nor easily dealt with when the clock starts ticking on its final chapter. It’s because fans realize they actually did, Gordon that steady rock in their life through prom, college, breakups, career changes, marriage and kids.

Through all those years, Gordon has played the part, qualifying for each and every single Cup race since that Atlanta season finale. His streak of consecutive Cup starts, when completed this November will stand at a record 797, an underrated accomplishment on a Hall of Fame resume during an era where injuries still keep drivers out of cars. Not only was Gordon always there… he was always up front. Every year, since his sophomore season of 1994 Gordon has finished 11th or better in the final standings. His lone season outside the top 10 (2005), which is also the only time he missed the Chase, was a year in which he recorded four victories, including the season-opening Daytona 500 and still led over 500 laps.

It’s that sustained success that has kept his fan base intact, an almost-impossible feat considering NASCAR’s new Chase era. Perhaps it’s the new format, at age 43 that has Gordon convinced it’s time to stop moving forward. After all, he had arguably the best season of all drivers last year but lost his chance in the Chase after a Texas rub with Brad Keselowski. A driver whose best success was based on consistency, bouncing back through all 36 races may never be cut out for a playoff system designed for peaking in one.

So now those fans, those who grew up with Gordon will be making a choice of their own. The landscape of the sport has changed for them, gray hair now dotting their brows while still rooting for the man once known as Wonder Boy. Their future connection to the sport is unknown, their loyalty uncertain as new rules look specifically toward attracting a new, up-and-coming generation. The torch is about to be passed, an elder statesman stepping back during a wave of major change even when his energy is higher than ever.

“I just love driving race cars,” Gordon said when asked about how he wanted to be remembered. “Ever since I was a kid, that’s what I wanted to do was be a race car driver.  I hoped that it would get to this level, but I didn’t know that was going to happen.  I think, if anything, it’s about seeing a kid’s dream come true in real life in front of thousands if not millions of people.”

You wonder if Gordon, while coming of age took note of Petty’s long, slow decline pre-retirement. In the late 1990s, Darrell Waltrip followed suit, guilty of hanging on too long and unnecessarily adding a rough final chapter. Gordon doesn’t have to make that choice, not with his stake in the Hendrick Motorsports dynasty and young Chase Elliott waiting in the wings. A driver who made “young gun” the rule, not the exception was 21 when he took to Cup for the first time; back then, people were calling him crazy. Elliott will all but certainly ascend to the throne, taking the ride at age 19, and no one will even bother to raise an eyebrow.

That’s how much power Gordon had in NASCAR’s most powerful era. Millions of fans knowing the end is near currently feel powerless, one year after a Chase that appears popular with the younger generation and perplexing for the older one. Will they keep watching the sport they love after Gordon leaves? Can NASCAR still capture their allegiance, connecting them with a son in Chase whose famous father Bill was the only man besides Gordon to capture the famed Winston Million?

People had the same questions when Petty retired, followed by the deaths of Allison and Kulwicki in ’93. The sport survived, then thrived but all would agree it turned a page. Gordon’s last hurrah could be a similar domino: Tony Stewart, after a year from hell, might not be far behind him at age 43. Greg Biffle, Matt Kenseth, even Dale Earnhardt, Jr. are on the back half of their careers at this point. Change is coming.

But that doesn’t make it any less difficult, or impactful no matter how much Gordon smiled Thursday. Twenty-three years later, we’re headed toward another season finale where no Game 7 moment can transcend the real story most fans will be following; a legend’s final ride.

The author of Bowles-Eye View (Mondays) and Did You Notice? (Wednesdays) Tom spends his time overseeing Frontstretch’s 30 staff members as its majority owner. Based in Philadelphia, Bowles is a two-time Emmy winner in NASCAR television and has worked in racing production with FOX, TNT, and ESPN while appearing on-air for SIRIUS XM Radio and FOX Sports 1's former show, the Crowd Goes Wild.
@NASCARBowles
Previous The Frontstretch Five: Reasons Why Jeff Gordon Is the Best Of His Era
Next The P2’s and the DeltaWing Could Steal the Rolex 24 from the DP’s