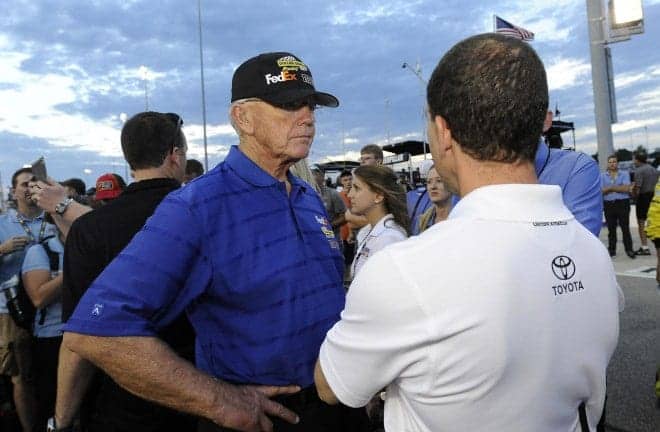 Joe Gibbs Racing has completed a makeover – and no, we aren’t talking about paint schemes either.

Within the Toyota organization, crew chief swapping was of the essence over the off-season, and adding a fourth car played a key role in creating a new atmosphere within the team. Chemistry was the key missing ingredient to Gibbs in 2014, but that won’t be the case during this upcoming season. A new engine package, along with three new crew chief/driver pairings, they are set to have a stellar season in 2015.

“The hope is that it (adding a fourth team) lifts it,” Matt Kenseth said on the 2015 NASCAR Media Tour this week. “We had to hire a lot of new people and get new stuff that should help us all. If it wasn’t going to improve the performance of the team, I’m sure coach wouldn’t want to add it.”

Adding over 100 employees to accompany the fourth team, the organization now has approximately 500 people working within its shop. The No. 19 has brought along not only a new driver in Carl Edwards, but more importantly a new mentality. But with a no testing policy being implemented this season, with the exception of select tests that disciplined by the sanctioning body, a team with extremely high expectations has the possibility of a slow start in 2015.

“This one won’t [hurt the team] because we’ve hired so much staff for that fourth team that it has allowed for a larger budget in a lot different areas,” Denny Hamlin explained. “Joe Gibbs was very patient when adding the third car, and he was very, very patient when adding the fourth car. You have to make sure you have the infrastructure for that, and they were very savvy on making sure they had the right people hired for this job. It is going to be a good thing for our team; no doubt about it.”

The only driver/crew chief combination that remains the same is Kenseth and Jason Ratcliff, who failed to score a win during the 2014 season following an impressive first year with JGR. The results of the Kenseth-Ratcliff pairing in 2013 is what’s expected of Edwards and his new crew chief, Darian Grubb. Grubb, who won the 2011 NASCAR Sprint Cup Series championship with Tony Stewart while racing against Edwards, is set to take the helm of the No. 19 Toyota following a three-year stint with Hamlin and the No. 11 team.

“I have a lot of expectations for Darian,” Edwards told Frontstretch. “We went head-to-head in 2011. I saw first hand how great of a crew chief he is. That is one of, if not the most exciting part of this for me. I haven’t driven one of their cars in an event, and I think after a month or two, we will have a good feel for it. I have raced against these Toyota Camry’s enough to know that they are stout and do a very good job.”

For Kyle Busch, after a love-hate relationship with Dave Rogers, he will begin working with Adam Stevens, who has won 31 XFINITY Series events over the past four years – 19 of which were with Busch.

“He’s never crew chiefed a Cup car, but he has been an engineer in the Cup Series before,” Busch explained. “He worked with Tony Stewart and Joey Logano in the last few years that they were at Joe Gibbs Racing. Working at the Nationwide level, that is the biggest communication that he and I have at working together. Moving up to the Cup level is an entirely different level of racing and competition, but there is no better guy in the shop that is more ready for it.”

Although he has worked with Stevens before, the team is expecting a learning curve for the first part of the season. However, JGR has brought in additional equipment with an extension to the organization.

With new chief pairings, Gibbs is also prepared for the no testing policy, which will likely be a downside following a lack of communication across the board in 2014. Although it could be a clear disadvantage for an expanding team, the drivers believe they are entering the new season in the best position that Gibbs has been in entering a fresh season.

“I feel like the advantage in the sport for a guy like myself that makes changes is that the Chase format allows you to win a race late in the season and still have a shot at winning the championship,” said Edwards. “Even if there is a steep learning curve and if we have some miscommunication, we can make up for it.”

Edwards, who moves over to JGR after winning 23 events with Roush Fenway Racing since 2004, is expected to give the organization a large boost in 2015. A boost that will be assisted by familiarity and overall chemistry among the rest of the four-car team, making Joe Gibbs Racing a force to be reckoned with in 2015.