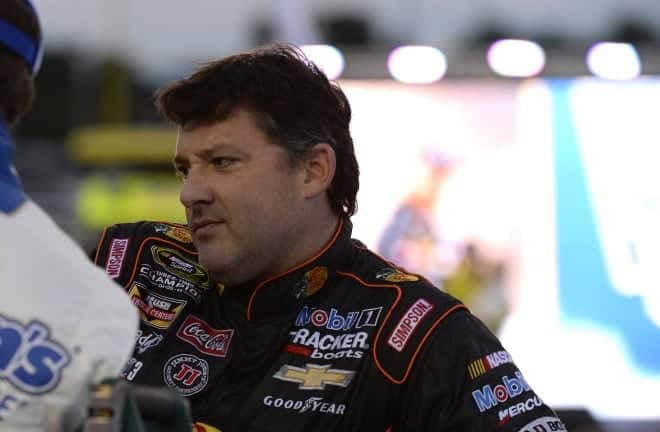 It’s hard to argue the success of a race team which includes the reigning Sprint Cup champion. Indeed, Stewart-Haas Racing has a pair of titles in the last four seasons, with team co-owner Tony Stewart hoisting the Cup in 2011 and Kevin Harvick adding to the hardware in 2014. Harvick, who won five times en route to his first title in 2014, looked nearly unbeatable at times during the season, and he’ll be among those favored to win the sport’s big prize this year.

But for SHR, which boasts three Cup champs on its roster (Kurt Busch won the 2004 title driving for Roush Fenway Racing), the road back to the top could be a bumpy one. Yes, Harvick’s team was firing on all cylinders when it counted last year, but even for them it was not an easy ride. Pit issues plagued Harvick early, and it was only after swapping crews with Stewart that the bleeding stopped. The No. 4 team now looks good to go for 2015, at least for now… but the organization as a whole has a tough row to hoe.

Stewart-Haas is rife with distractions entering the season, and some of them don’t even have much to do with the current Sprint Cup competition. There are so many elephants in the room that the team could charge admission as a zoo.

At the top of the list in terms of recent airplay, Busch is embroiled in a battle of words with ex-girlfriend Patricia Driscoll, who brought allegations of domestic violence against Busch late last fall. Those allegations have since led to court appearances in Delaware as well as trial by fire in the court of public opinion. If the courts ultimately side with Driscoll, it’s very possible that it will put an end to a NASCAR career that has already had nine lives as Busch has bounced from team to team for a number of reasons, including a confrontation with Arizona police officers and on-air tirades. Even if Busch is ultimately exonerated, it could still spell career suicide for a driver who has been unable to put together a serious title run since winning in 2004 if he’s unable to put together a winning season or even a consistent one.

While opinion appears to be split on the Busch case, at least on social media and behind closed doors, Busch should probably thank his lucky stars that he’s sponsored by his team owner’s company and therefore has a level of support that an outside company might not have provided. NASCAR has also been supportive of the driver so far in a day where domestic violence had come to the forefront in professional sports thanks to a few other highly publicized cases. But if Busch is eventually found guilty, the sanctioning body’s hand will be forced and Busch will almost certainly face suspension, at which point, the team will also be pressured to act. Things are far from solid where Busch stands… and he’s not the only one.

Tony Stewart, three-time Cup champ and team co-owner has a long way to go before he can be considered a title threat, let alone the perennial favorite he once was. Stewart’s own court battle is (at least for now) behind him after the racing incident he was involved in last summer that claimed the life of competitor Kevin Ward, Jr. He’s still battling back from a catastrophic injury sustained while racing a sprint car in the summer of 2013, and he could also still face a civil trial stemming from Ward’s death.

Stewart said Tuesday that his passion for racing is stronger than ever, and coming from Stewart, who always speaks earnestly when it comes to his racing, it’s completely believable. The problem is that passion doesn’t always mean performance. Stewart was walking better during the annual Media Tour than he has since the accident, four surgeries ago (and he still faces a fifth one after the 2015 season), and he says he feels the best he has since he broke his leg. But until he proves it on the racetrack, whether or not he can return to championship form at age 43 is an unanswered question.

Elephant Number Three presents an interesting situation: Danica Patrick. Patrick, who will start the season with the added pressure of 2015 being a contract year, has yet to prove herself an elite NASCAR driver. She was 28th in points last year… three spots behind Stewart, who missed three races. Patrick said Tuesday that she doesn’t consider 2014 a subpar season, but either her standards are unbelievably low, or she’s missing the point.

Patrick has the ability to bring a team a hefty sum in sponsor dollars. But if the organization is sinking a disproportionate amount of time and money into just one of four teams, at some point, does it become a resource drain the team can’t afford? Patrick and others have played the learning curve card well for the past two years, and to an extent they’ve played it well, because there have been few newcomers in recent years who have done much better. The problem is, 2014 gave us a marker for comparison in the form of Kyle Larson and Austin Dillon, rookies who, driving cars of similar caliber, easily outstripped Patrick almost from day one. Suddenly the learning curve card isn’t quite as powerful.

There’s no doubt that Stewart-Haas has championship potential this season – Harvick’s title proves that. But with just one of four teams performing at the standard the team should be able to expect, something isn’t working the way it should. And with the rest of the field gunning for them, the road back to the top could be too hard to navigate this year.

The success or lack thereof, is absolutely tied to their ability to draw on relationship with HMS.