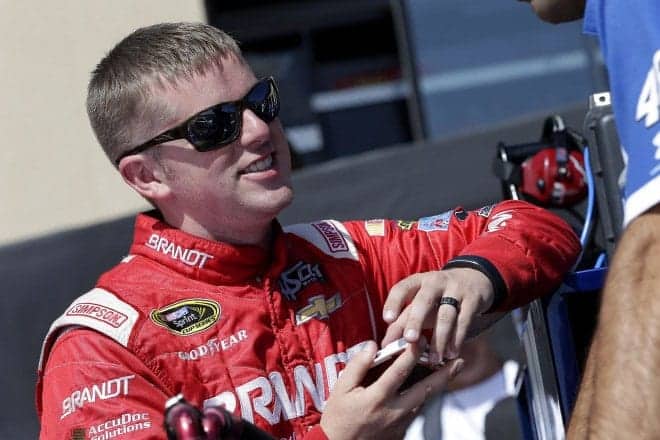 Following his rookie season with Tommy Baldwin Racing, Michael Annett is on the move. HScott Motorsports has signed the 28-year-old NASCAR Sprint Cup Series sophomore to drive an as a teammate to Justin Allgaier for the Chevrolet organization. In addition, the team has also created a technical alliance with Stewart-Haas Racing, which is going to be focused on the engineering side of the operation.

With a continuing relationship with Pilot/Flying J, which has supported the Iowa native since 2007, Annett moves over from TBR to join Allgaier, who will continue driving the No. 51 car and is going to have Brandt return for 21 events in 2015. Additional sponsorship will be announced for both drivers, but Auto Owners’ Insurance will sponsor three races for Allgaier. As for Annett, Cypress HQ and Allstate Peterbilt will continue to back him following his first year in NASCAR’s premier division.

“The opportunity was here with HScott Motorsports, and I wanted to jump on it,” said Annett. “The opportunity presented itself to come over here, and I’m excited to be a part of this team. Justin and I were both rookies last year, and he had the rookie year that I would have liked to have.

“It’s tough to make a decision like that as late as it is because there is only a little time to put a team together like we are. The foundation is here with HScott Motorsports. Everything at the shop is ready for the first three-four races for the season. We just need to put people in place to work on them at the track every weekend.”

No car number has been announced for Annett, nor has a crew chief been named, but both will be determined in the coming days. Scott confirmed that they will not use the No. 52, which was utilized when Bobby Labonte ran a second car for the team in last season’s Daytona 500.

Steve Addington will continue working with HScott Motorsports in 2015 as Allgaier’s crew chief, and will also remain as the competition director for the organization.