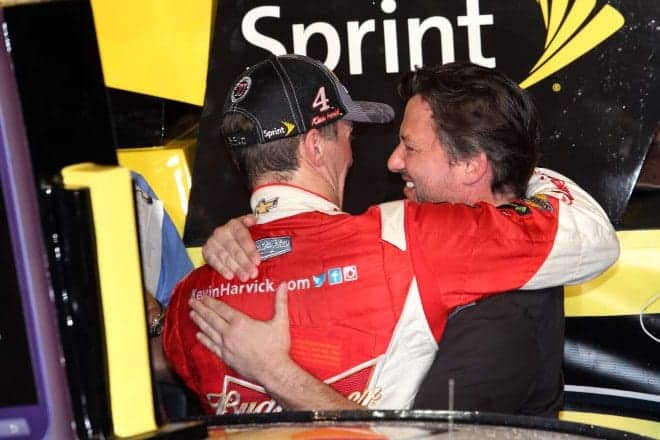 Earning a championship is at the top of the wish list for every team entering a fresh season. For Stewart-Haas Racing, the organization is set to repeat as champions with Kevin Harvick and the No. 4 team. However, with two teams missing the Chase, there is room for improvement throughout the four-car organization.

With multiple adjustments to the 2015 rules package, and more to come next year, team co-owner Tony Stewart believes that they are being to get ahead once again. After falling behind for the majority of the season last year, the entire organization is using additional resources to get set for the new season.

“It is just preparation,” Stewart commented on trying to make all four cars consistent. “You go out and do the best that you can. You need to do the best job you can at understanding what the package is going to be. There are too many variables that are out of our control to put your thumb on it and say: this is what we need to be consistent.

“It’s the same for all of the teams. There is a lot more energy towards the engineering side and simulation side. I feel like that is an aspect that we have been able to get our hands around.”

But following the sub-par efforts by Danica Patrick and Kurt Busch, Stewart-Haas Racing opted to make a crew chief swap with just three races remaining in 2014. Busch, working with Tony Gibson, had an average finish of 8.67. Meanwhile, Patrick began to work with Daniel Knost, and the pair had an average finish of 25.34, which was a slight decrease from her total season average of 23.7. Although it was a small sample of what to expect from both in 2015, they have their sights set on starting from scratch.

“Well, it’s just great to have made the change last year and to get our feet wet,” Busch said in a press conference on Tuesday afternoon. “It is always fun to go to the track with new members and new people in different positions. We have to remember our strong suits, the areas that we need to work on and we were able to do that in the final three races.”

Entering a contract year, Patrick is hoping to improve from her 28th-place finish in the standings, which is a spot worse than her rookie campaign.

“I think in my second year in the Cup Series, there were certain things that we wanted to work on as a group,” said Patrick as she defended her strategy. “I feel like there was drastic improvement, even though the overall championship position didn’t show that. There was a lot of improvement in areas that we wanted to. I consider that a success. Moving forward with Daniel, it really opens up new possibilities. With a new person, there are new possibilities. There are new ways of getting things done. We are going to be working hard to put our best ideas together and stay positive.”

Knost, in his rookie season as crew chief, notably struggled with Busch, who is currently in the midst of a protective order case with his ex-girlfriend, Patricia Driscoll. Busch will be working with Gibson, who has been on top of the pit box for 336 races entering this season, and he believes he has potential to contend for a championship with one of the most controversial drivers in the sport.

“The biggest thing is, Kurt likes a really free race car, like extremely loose,” Gibson explained. “Danica likes the more secure-type of feel, which has nothing wrong with that. Last year, when we were running successful with her running inside the top-15, which was our goal, the way we achieved that was when we start the season, Harvick was saying that he was going to help her. When we put Kurt in the car, he said it was way too tight. It was good to get those three races under our belt because it helps me be a step ahead this year on that balance. Kurt Busch loves a loose race car, and that’s why I think the 2016 package is going to bring those guys (the ones that like loose cars) back into it.”

With a fresh aspect on life entering the 2015 season, Stewart is optimistic that the changes are going to work almost immediately. The no testing ban is unlikely to harm the team’s results, and momentum should continue following Harvick’s solid 2014 season.

“The No. 14 car had some strong runs,” said Greg Zipadelli, competition director for Stewart-Haas Racing. “They never had enough momentum to build on it and take it to the next step throughout the year. Every time they had a good day, something went wrong and almost brought them back down to a lower level.

“Danica is somebody that has more of an engineering background and had a laid out plan like Daniel. Tony Gibson is more of a racer; he put his hands on things and makes them go faster. That is a little more of Kurt’s strength and style. I think they are believing in their people a little bit more. Let’s face it, we weren’t happy with what we had. We don’t want to bring a lot of people in from the outside because you don’t know if they’ll be here long term.”

Harvick will be carrying the team on his back in 2015. He has high expectations for this season, especially with more time to prepare with crew chief Rodney Childers. Last season, the two had to piece together the No. 4 team with no equipment heading into the off-season. Moreover, the knowledgeable duo is only going  to continue to grow with less pressure than ever before.

“There is way less pressure,” Harvick told Frontstretch. “Coming into this situation last year, I was pretty nervous. It may not have followed through, but there are so many questions in your head about a very comfortable situation. I didn’t want to be comfortable; I wanted to experience what we experienced last year. You have to make some bold and hard decisions to make things like this happen. For me, I am as comfortable as I’ve ever been.

“They put the No. 4 and No. 14 together to try to get everybody up to speed as much as we can at SHR. I feel as comfortable as I ever have just for the fact that you don’t have those expectations that you haven’t looked up to. You looked up to them and you are going to continue to look up to them.  Sometimes, it’s not going to be good enough and you have to have it all go your way. If you’re winning and putting all of your effort into it, you are going to be in good shape.”

The bottom line is that Stewart-Haas Racing needs to move forward and perform better than it did as a whole last season, and given the changes put in place by the organization and NASCAR for the 2015 season, there’s a chance that it just might happen.