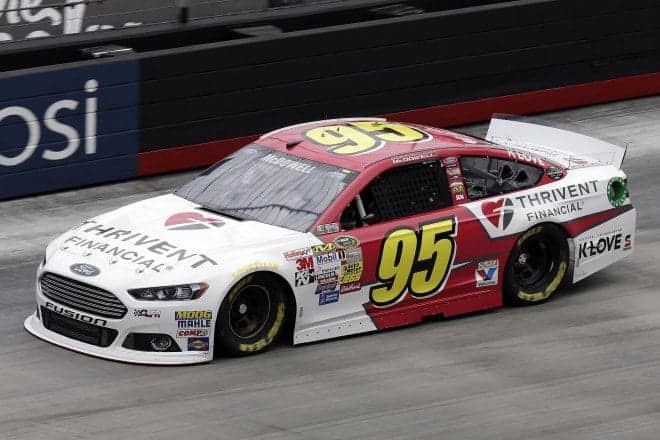 Michael McDowell has picked up some sponsorship for his 2015 part-time NASCAR campaign.

Leavine Family Racing announced Wednesday that Thrivent Financial has extended its relationship with the No. 95 team and driver McDowell for the 2015 NASCAR Sprint Cup season. The company, a 2014 Fortune 500 not-for-profit organization, provides financial services to “help Christians be wise with money and live generously.”

Thrivent will be the primary sponsor of the No. 95 for 10 races in 2015, starting with the Daytona 500 next month. The company will serve as an associate sponsor for an additional 10 races.

“It’s clear we’ve aligned with the right race team and the right driver,” Thrivent spokesman Craig Stacey said in a LFR press release. “The success of this relationship is rooted in the fact that Michael and LFR have strong values that align well with our mission. We’re confident this sponsorship is helping us tell our story to more Christians who want to hear about our blend of faith and finances.”

McDowell, whose faith is a central part of his life and career, said that having faith-based backing is meaningful to him.

“Thrivent Financial is a perfect fit for me and our team,” he said. “I became a Thrivent member last year after learning first hand about their mission to help Christians strengthen their families and communities.”

Leavine Family Racing runs a part-time schedule in the Sprint Cup Series. McDowell piloted the car in 19 races in 2014, with a best finish of seventh at Daytona in July for an overall average finish of 30.6.