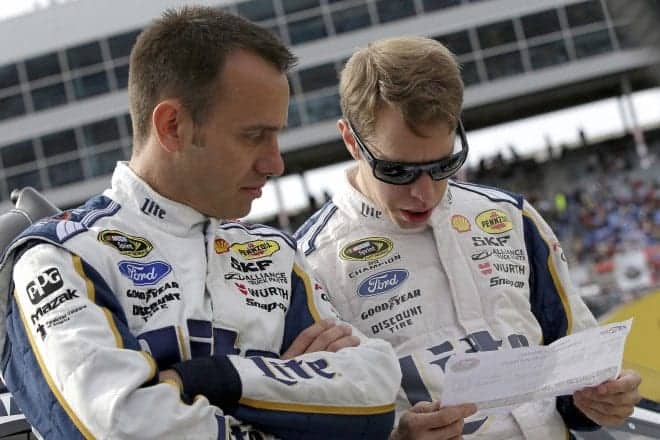 While many NASCAR Sprint Cup teams are talking about changes they’ve made in the offseason during this year’s Charlotte Motor Speedway Media Tour, Team Penske isn’t buying in. The organization, coming off a 2014 season where Brad Keselowski and Joey Logano won a combined 11 races, has a theme heading into 2015: if it ain’t broke, don’t fix it.

Remaining largely intact, the driver/crew chief duos of Brad Keselowski/Paul Wolfe and Joey Logano/Todd Gordon lead the team’s efforts. Xfinity Series driver Ryan Blaney also returns to that series, but with veteran crew chief Greg Erwin replacing Jeremy Bullins, who moves with Blaney to the No. 21 Wood Brothers Racing team for an 18-race Sprint Cup schedule. Wood Brothers Racing and Team Penske formed a technical alliance this winter in order to help Blaney’s development and to share information between their teams and the No. 21.

Team Penske Pesident Tim Cindric said Wednesday that the team saw firsthand how important continuity is for the team. “2014 was the first time that we brought the same crew chiefs and drivers back since I can remember, really.  I think the results spoke for themselves,” Cindric said.  “Obviously, you can’t look at last year and expect the same, but we do.  We expect to get off on the right foot and continue to build on that, but I think although the variables are small, we continue to build continuity in our people.  When you look at not only the people, but the product – we’re racing Fords, racing the same car, the same department heads, a lot of the same things.”

Team Penske, along with Hendrick Motorsports appeared ahead of the curve throughout much of the 2014 season. While NASCAR brings new rules to the table in 2015, along with a new set of challenges the organization remains confident they’ll stay a step ahead.

“The rules changes, those are always the things that differentiate you and the people behind you are the ones that really dictate who gets their first, who learns the fastest, and I think we’re really at a good advantage with the people we have internally and not only the drivers and the crew chiefs, but also the people back at the shop,” added Cindric. “With Michael Nelson and Travis Geisler and all their department heads we just continue, I think, to build better and better people.  But I think the one thing that is different this year is our association with the Wood Brothers.  Since we have half the races this year, we’ll essentially have a third car on the track with our association there, so hopefully we’ll be able to learn faster than what we did last year.”

Keselowski echoed Cindric’s sentiment. “The first thing that came to mind when I sat up here was how sorry I felt for the photographers because it’s the same exact picture you took last year,” said the 2012 Cup champion. “The same shirts, the same people. The only change is the Ford Performance logo on the shirts, so that really speaks to where we’re at as a team and as a company… the continuity is huge.  Like I was saying before as far as how it plays forward, you can’t get stuck on the past.  We talk about that all the time here at Team Penske, but we can be proud of it and we can build a platform off of it and I think for us we focus on what we have and what we have is those strong relationships.  We might not have eight cars, but I think we have three of the best and that’s three of the best teams and I feel like we have an advantage with that.  That’s part of our success last year and I think it will be part of our success for years to come. ”