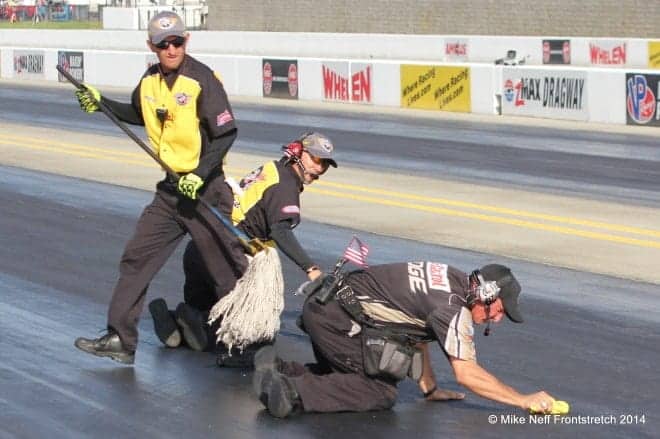 NHRA announced an increase to the penatlies levied against teams in the Top Fuel and Funny Car categories for causing an oildown during the 2015 season. Penalties for other classes will remain the same as 2014.

Oildowns and the subsequent cleanup cause significant delays in the racing action, something NHRA sees as detrimental to the fan experience at the track, but in particular this year with more live television broadcasts on tap, something the sanctioning body is hoping to avoid in order to stay on schedule during the broadcasts.

“We offer race teams considerable input on how to avoid oildowns,” said Graham Light, NHRA’s senior vice president of racing operations. “But the responsibility still lies with the team. In 2014, oildowns contributed to significant delays over the course of each race weekend.”

Essentially, the move encourages a more conservative approach and discourages teams from pushing the envelope too far in the area of lightweight or experimental parts that might not last through a pass.

Point penalties will be waived during the NHRA Mello Yello Countdown to the Championship, but monetary fines will be in effect for all 24 events.