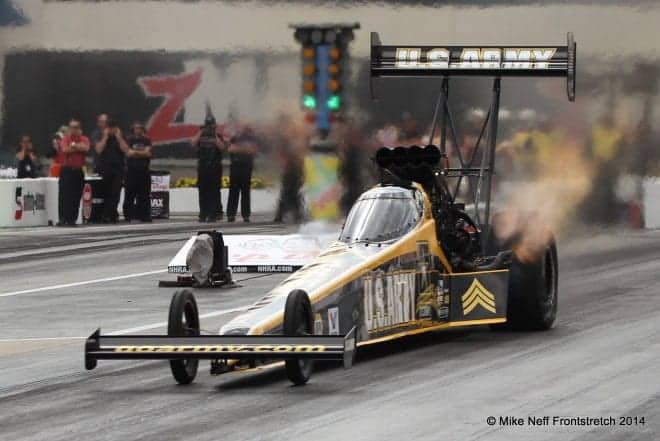 Days are getting longer, winter is hopefully winding down, and football season has come to an end. What does all that mean? It means it’s time for racing season! The NHRA Mello Yello Drag Racing Series hits the track at Auto Club Raceway in Pomona this weekend for the Circle K NHRA Winternationals, so in celebration, it’s time to preview the 2015 season.

Today’s focus will be on the Nitro divisions, Top Fuel and Funny Car. Tomorrow we’ll wrap it up with a look at Pro Stock and Pro Stock Motorcycle (Note: Pro Stock Motorcycle will not be on track this weekend in Pomona. They will make their 2015 debut at the Amalie Motor Oil NHRA Gatornationals in Florida March 12-15.) Here are some thoughts on the potential top three drivers in each category along with some drivers and storylines to keep an eye on this year.

We’ll start out with the fastest of the categories, Top Fuel. Who looks good for the top three this year?

The Sarge, Tony Schumacher, racked up his eight Top Fuel World Championship last year and as a result, he will be the guy carrying the No. 1 and the bullseye this year. That automatically puts him in the top three. But is he worried about being the target?

“I think about that all the time. I go, oh, man, they’re going to be really gunning for us, and then I go, wait a minute, they’re always gunning for us. We had the No. 7 on our car last year and the quickest runs in the history of last season were against me, and it didn’t have the No. 1 on the side of the car. I think that Army car is so cool, people love racing it.”

Kalitta made it to the final round nine times last year, winning twice, and leading the regular season standings before Schumacher went on a tear and passed him by in the Countdown to the Championship. The Mac Tools dragster team returns intact with the same personnel as last year.

Brown won an NHRA best six event titles last year. He’s won the championship before so he knows how to get it done.

“It’s right there. All we have to do is reach up there and grab it,” said Brown. “Trust me, we are going to be grabbing hard with everything we’ve got.”

So that’s it, just those three to watch, right? Absolutely not. There are a number of other strong contenders who could also make a case for themselves in this category. For one, there is Kalitta’s teammate, J.R. Todd. He ended up second in points in 2014 and that’s after missing the first two races of the year. Schumacher and Brown also have to look out for a teammate in Spencer Massey. He was third in points and won three events in 2014 so he could easily have a breakout year in 2015. Rookie of the Year Richie Crampton returns with some experience under his belt and ready to go.

Brittany Force is entering her third year and has made steady progress in her first two seasons. Last year she was fastest qualifier three times, had four runner up finishes, and qualified for the Countdown. She’s also thrown down the gauntlet so to speak, making a 3.698 second pass in testing in Phoenix during the off-season. Former champion Larry Dixon is also returning full time, driving for Bob Vandergriff.

One question mark does loom in the person of 2013 Top Fuel champion Shawn Langdon. By all rights, he should absolutely be part of the championship conversation, but his future is uncertain after his team, Alan Johnson Racing, suddenly parted ways with Al-Anabi Racing. The team will be in Pomona for the Winternationals, but continuing funding is still up in the air.

“I’ve been there when you find out something last minute is changing,” said Tony Schumacher. “It’s terrible. It’s not good for the sport. Not only do we need more cars, but we can’t in any way afford to lose any of them, and not the caliber of crew that those guys are.”

The team is going to Pomona hoping to put on a strong showng for potential sponsors. They won both races at Pomona in 2013, and are the defending champions of the Winternationals, winning last year with former driver Khalid alBalooshi. This is a team that has won three of the last five Top Fuel World Championships so if they can get the sponsorship issue resolved, they can certainly contend.

One other story to keep an eye on is Dave Connolly, who is moving from Pro Stock to Top Fuel as a teammate to Larry Dixon on Bob Vandergriff’s team. Connolly finished third in Pro Stock points last season and has 26 wins in that category, but he’ll be starting from scratch with the move to Top Fuel. He’s spent much of the off-season testing and getting acquainted with the dragster and earlier this month reached 3.70 seconds for the first time. He’s logged more than 20 test runs going in to Pomona.

“Really, until you sit in one you don’t realize the amount of ground you cover in such a short time. You have to stay ahead of the car and that’s hard to do when you’re going more than 300 mph. Hopefully after 20-30 laps it will start to slow down and it already is a little bit,” said Connolly. “I’ts just going to be a work in progress. When you’re setting goals for yourself you have to learn to walk before you run in these cars and I understood that going in. I knew there would be a learning curve and that’s the way it is.”

What about that other Nitro division, Funny Car? This is the category that has perhaps the deepest field of all. Pinning down a top three is really a tough call, but here’s a stab at it.

The 16-time champion has always got to be part of the conversation. Yes, he’s 65 years old but that didn’t stop him last season when he took it down to the final round of the final race with Matt Hagan fighting for the championship. He’s not going anywhere and he’s far from done winning.

Hagan is the defending champion. Did this team rest on its laurels as a result? In a December test session in Florida Hagan recorded the unofficial quickest run ever by a Funny Car with a time of 3.954 seconds at 323.97 mph, so no, they aren’t laying off at all.

Capps had off season surgery for torn triceps muscles in his right arm but he’s ready to go for 2015. This is his eighth season in NAPA car and he’s always a threat. It’s hard to say a driver of Capps’ caliber is an arbitrary choice, but if anything it just speaks to the depth of the field in this category that it could be him, a perennial favorite who has yet to win that elusive championship, or it could be a half dozen others.

So who are those other contenders? Hagan and Capps are teammates at Don Schumacher Racing, but they have two other Funny Cars coming out of their own stables to worry about. Tommy Johnson, Jr. is back for his second full time season with the car and is looking forward to getting some consistency going now that his team has had a year to gel. Fast Jack Beckman was arguably not fast last year, missing the Countdown cut, but he returns for 2015 with former John Force duo of Jimmy Prock and John Medlen as crew chief and assistant on his car and he’s optimistic about the change.

Two time Funny Car champion Cruz Pedregon should not be overlooked, and perennial fan favorite driver/owner Tim Wilkerson will be out there as well.

From the Kalitta stables come Del Worsham and Alexis DeJoria. DeJoria had a breakout season in 2015, scoring not just her first Funny Car victory, but three of them. Again, it’s just a matter of developing consistency.

“Coming out of last year, which was really our breakout year, we accomplished so much more than we had initially expected,” said DeJoria. “Being that close to Championship contention, it made us hungry for it.”

Guaranteed John Force Racing will be looking to make a statement right out of the box in Pomona. In addition to the team patriarch, daughter Courtney and Robert Hight are both serious threats for the championship. Hight won five times in 2014, and was the points leader for 13 weeks, most of the season, before the boss snatched the lead just before the Countdown. Courtney Force won four races in 2014, the most in a single season by a female Funny Car driver, and became the winningest female driver in the category, surpassing sister Ashley Force Hood.

John Force probably summed up the potential of the 2015 Funny Car ranks in the best fashion.

“I’m ready, but Hagan will tell you, if he focused on me and I’m focused on him, well then Cruz Pedregon or Robert Hight or Courtney or Ron Capps is going to go around us,” said Force. “So what do we do? We take them a day at a tme. Robert Hight wants a championship as much as I do, and he knows how to do it. Courtney, she’s ready. She’s got a race car and she knows how to drive it. But there’s a lot of other kids out there that are overdue. Ron Capps has got a great team. Any day his could happen and it would be well deserved. We’ll be back in the hunt. It’s exciting times to watch this. I’m ready to rock and roll.”