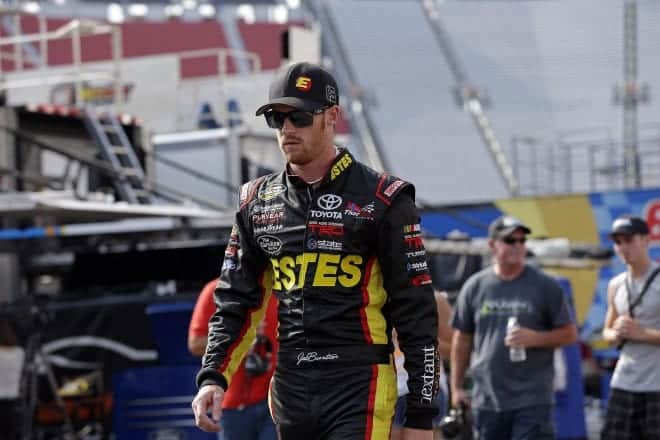 UPDATE: BK Racing made the weekend speculation official on Monday when they officially announce the addition of driver Jeb Burton to the team’s 2015 Sprint Cup lineup. Burton, 22, raced the past two seasons in the Camping World Truck Series, most recently with ThorSport.

He’ll race BK Racing’s No. 26 for the full 2015 season, taking over from Cole Whitt, who was the team’s top driver in 2014 with a 31st-place points finish and top race finish of 15th at Talladega in the fall.

Burton has made 49 starts in the Truck Series, amassing one win, seven poles, seven top 5s and 19 top 10s. He also has two XFINITY Series starts and one top-10 finish in that series. Burton becomes a second-generation Sprint Cup driver; his father Ward had five wins in his 13-year Cup career, including the 2002 Daytona 500. Ward’s brother Jeff spent 22 years in NASCAR’s top series with 21 wins and joins the television broadcast in 2015. Ward Burton will act as a Team Ambassador for BK Racing this season, making select appearances with Jeb.

“I am so thankful for the opportunity that BK Racing has given me,” Burton said in a team release. “It has been a dream of mine to race in the Daytona 500 ever since I was nine years old and I stood with my Dad in victory lane. I remember thinking to myself then in 2002, I would like to win the 500 one day. Now I have a chance at making that dream come true. I am looking forward to making the 500, providing the best possible finish I can by running and racing hard every lap this season. I also look forward to competing for the 2015 title of Rookie of the Year. Each week, I will be concentrating on finishing on the lead lap and learning as much as possible.

“BK Racing gave me a call and gave me an opportunity. They believe in me. If they didn’t, I wouldn’t be sitting here,” Burton said as he addressed the media on Monday at the NASCAR Hall of Fame.

He will also run for the Sprint Cup rookie title. The driver says that he feels ready for the challenge and that a reasonable 2015 goal for the No. 26 would be a top-25 points finish.

“I’d love to win Rookie of the Year… [My goal is] to run all the laps and complete all the races, keep my nose clean and not tear up equipment. I need to work on being competitive… earn respect on an off the racetrack. I’d really like to get in the top 25 in points. If we can do that, it would be a great season.”

Patrick Donohue was named as Burton’s crew chief. Joe Williams will lead JJ Yeley and the No. 23 crew, while Doug Richert will be on top of the pit box with Johnny Sauter and newcomer Matt DiBenedetto for the No. 83 effort. The team will also run the No. 93 in select races. BK Engines will again provide the power for the team’s four Toyotas.

Sauter will run the No. 83 in the Daytona 500. Burton said that Sauter was his first choice as a drafting partner because the two worked well together in the draft at ThorSport.

“We are very lucky to have a great, young talented driver like Jeb Burton in one of our NASCAR Sprint Cup cars,” said team co-owner Anthony Marlowe. “It was important for us to find full-time anchor drivers for this season that are experienced and team-oriented. Jeb’s success in the NASCAR Camping World Truck Series along with his family’s history in the sport makes his emergence into Cup a great story. The story, which also includes having a strong shot at winning Sunoco Rookie of the Year in 2015, has already proven to be very marketable. I look forward to seeing Jeb behind the wheel of the No. 26 Toyota Camry very soon. I think he is going to do great in the Daytona 500.”

Multiple outlets are reporting that Jeb Burton, recently of ThorSport Racing in the Camping World Truck Series, will be announced Monday as the new driver of BK Racing’s No. 26 Toyota in the Sprint Cup Series. If so, Burton would be the first driver to declare for Sprint Cup’s Rookie of the Year battle, as Trevor Bayne was recently declared ineligible (too many Cup races run).

According to NASCAR.com (http://www.nascar.com/content/nascar/en_us/news-media/articles/2015/2/8/nascar-sprint-cup-series-bk-racing-jeb-burton-sunoco-rookie-of-the-year.html), BK Racing co-owner Anthony Marlowe confirmed to the site via text message that the team has signed the 22-year old racer to a long-term contract. In addition, Jeb’s father Ward would also serve as a mentor / driver coach.

Marlowe is very confident that Burton will adjust to Sprint Cup fairly quickly.

“With mentorship from JJ Yeley and Daytona 500 champion Ward Burton, we believe [Burton’s] learning curve will be reasonable,” Marlowe told NASCAR.com. “55 percent of the time, in major NASCAR series races, Jeb has finished in the top 10. He has finished an insane percentage of his races running. He’s very talented, marketable and committed to be loyal for years to come.”

Burton has never started a Sprint Cup race, or even driven a Sprint Cup car. He does have two starts in the now-XFINITY Series and 49 starts in the Camping World Truck Series. Burton has one career Truck Series victory at Texas Motor Speedway along with seven top-5 finishes, 19 top 10s and seven poles. In the XFINITY Series, Burton had an eighth-place finish at Kentucky Speedway when he made his series debut in 2013.

Previously, Burton was planning to stay with ThorSport Racing for a third full season in the Camping World Truck Series. However, primary sponsor Estes Express Lines pulled out when they were unable to reach an agreement on terms to extend their deal. As a result, Burton was looking at starting the 2015 season on the sidelines prior to the BK Racing opportunity becoming available. (Phil Allaway)

Good luck Jeb. Not just with the racing but getting a check from BK.