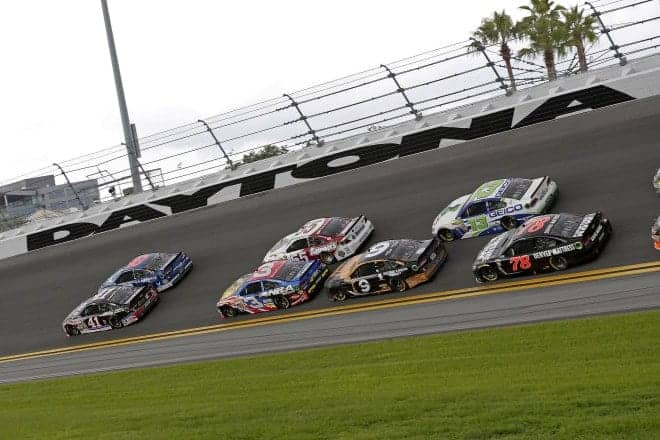 With a new season comes a renewed sense of optimism for the promise of a successful campaign for each organization. A season filled with the hopes of victories and strong runs week in and week out. One that will conclude with crowning one champion out of 43 of the best race car drivers in the world. While some of the numbers, faces, car colors and sponsors on hoods and quarter panels may have changed since we ended 2014, what remains the same is the sound of 43 725-horsepower engines firing up at the start of a race and the feeling of victory as the checkered flag falls at the end of another day at the track. Despite the rules changes, new engine package and the addition of the new Chase format last year, this sport still remains pure. It remains something even the vision of Big Bill France, now 67 years ago as he sat with the sports founding fathers at the Streamline Hotel in Daytona Beach, wouldn’t be able to even fathom.

And its now, in February, when much of the country is under snow, the relentlessness cold of winter and dreaming of spring, that this one week signifies what in many NASCAR fans’ minds is in fact the start of spring. A new beginning. That week is finally upon us – the 2015 edition of Speedweeks at Daytona International Speedway. Most of us aren’t lucky enough to be in Florida for these days of racing glory, but for those who are, there is truly nothing like the experience, whether you are a competitor, a member of the media or a fan. Daytona is just simply special… the kind of special that is so appropriately set aside to kick off the beginning of each new season.

Personally, I am not only excited about Daytona, but also very excited to start this new season here with all of you and our NASCAR Mailbox column. As you know if you’ve read us in the past, each week we’ll take question on the sport from you our readers and do our best to dig-in and get you the answers from all corners of the NASCAR world and from industry insiders.

So that’s enough about me, let’s get to the first series of question to kick off this new season….

Q: How will the new pit road cameras and the changing role of NASCAR officials change the way teams prepare for pit stops? Thanks! -Rodney, Smyrna, GA

A: Well Rodney, to be honest… not much at all. The truth is that Sprint Cup Series teams have been filming and recording their pit stops for years. You may have seen those little things mounded right above the pit stall of each crew – well, those are cameras. Each team can use this footage to review how the stops went and what adjustments are needed during the race. The video can also be used to determine if an infraction was unintentionally made – for example a loose lug nut that wasn’t tightened – or a body part that fell off while applying bear bond or making adjustments to the car.

NASCAR’s new automated pit officiating will help by taking the human aspect out of split-second decision-making that sometimes can hamper a team’s chances during a race by officials who go over the wall. Officials will no longer be going over the wall and watching each team, but rather stay behind the wall and view the stop along with those viewing stops on 46 cameras mounted above the towers at each track on the schedule. Each official in the camera truck will be assigned to reviewing the stops of two pit stalls each at a time, meaning the cameras will pick up two cars stops, adding a backup camera in the case of tech failure.

A little known secret is that NASCAR was actually testing the cameras and new system at the last 12 races of the 2014 season. That means throughout the entirety of the Chase, this system was in action and, by all accounts, worked just as NASCAR intended. Overall, NASCAR sees this new style of officiating more beneficial to both teams, in terms of accuracy on calls, and to the officials and pit crews improving safety over the wall on pit lane.

Q: Since NASCAR changed the policy on off-season testing this year, how will Cup teams know what equipment will do at certain tracks this year? And what will the crop of rookies do without getting behind the wheel of a Cup car? -Bobby, Roanoke, VA

A: The new NASCAR imposed testing protocol this off-season has been interesting. Usually teams will get on the track a few times to test new setups or even a new driver (as in your questions about rookies). Without the seat time and on-track time for Sprint Cup teams, it’s really helped to even the playing field between the haves and have-nots in our sport. Think Hendrick Motorsports vs. a team like BK Racing or Go FAS Racing. Now all teams are headed into Daytona with only their notebook, wind tunnel testing data, their knowledge in the seat from the prior year (or years) and some help from simulations run this winter.

That’s right, simulators have been helping Cup teams prepare for races for some time now, but this year they’ve taken on a whole new important meaning in the shop. Now these simulators are not what you’re probably thinking. An iRacing setup with the driver inside and a huge screen, all on hydraulics, right? No. These simulations are more computer modeling than actual driver-based data. These are highly sophisticated programs that can run multiple fields of data from fuel ratios to the car’s suspension setup on a particular track for a certain amount of laps run to tell teams how their setups might preform. That’s a huge might… no matter how many simulations teams run, or how prepared they might be from studying notes, nothing beats actual track time. And although the testing during the off-season has been put to bed by NASCAR, the sanctioning body is still allowing Goodyear tire tests and other testing to teams invited by NASCAR during the season.

Q: I’ve heard some teams aren’t entering in the Sprint Unlimited race at Daytona this year because they can’t afford it. Is this true? What do you think will happen to this race if they can’t fill driver slots? -Jerry, Cranston, RI

A: First, I wouldn’t worry about this race going away anytime soon. It’s really become the unofficial kickoff of the racing season each year down at Daytona – and one that the drivers really seem to love. It’s laid back but still gives the premier teams at the Cup level the chance to get some more track time on the 2.5-mile superspeedway and fans the chance to witness another race with the top 25 teams in our sport on a Saturday night in prime time.

On what you’re hearing… the short answer is yes. Teams that have qualified for the Sprint Unlimited aren’t always the teams with the most sponsor assets in the garage area. To make it in the field for the Sprint Unlimited, teams must fall into one of these categories: a Coors Light Pole Award winner, a former Unlimited race winner, a Daytona 500 pole winner who raced full time in 2014 or a driver who was part of the Chase for the Sprint Cup in 2014. For example, AJ Allmendinger is qualified to join the field for Saturday night’s event, however the team was unable to find sponsorship for the exhibition race.

And don’t forget about the financial impact on a single car team like JTG-Daughtery if its driver were to tear up the car during a race that. When it comes down to it, the Unlimited is a race that doesn’t really mean a lot when it comes to the ultimate goal of contending for the championship in 2015. Destroying one of the Daytona cars for JTG-Daughtery, although the team does have an alliance with Richard Childress Racing, would not really help to start the season off on a positive note when it comes to the team’s budgeting and sponsorship. But while a team or two may bow out from the event, this race still remains NASCAR’s kickoff race of the year in the Sprint Cup Series and one that the sanctioning body will probably continue to reinvent each year.

Have a question? Email me at greg.davis@frontstretch.com, and make sure to check back next week when we’ll answer your questions on all things NASCAR. Until then, enjoy Speedweeks from Daytona!

Wow! How refreshing. There is actually a way for readers to submit questions this year.

The purpose of the Sprint Unlimited has become less meaningful. I wish they’d go back to just letting those that won a pole in the previous year in the race. The only thing it still has going for it is that it’s the first time cars are on the track and therefore it provides a fix to those of us that have been in withdrawal.

Interesting change for the mailbox – hopefully this will be better than Summer making up the questions & the answers.

Sprint Unlimited? What’s that? Oh yeah, I remember now. This has changed names so many times I forget what the purpose for it actually is. It used to be about winning a pole, but that’s gone and now it seems just another popularity contest run by NASCAR.

I guess I should be glad to see cars on the track. Without testing or much any other news in NASCAR, if you discount Kurt Busch’s testimony at his trial, it was a really boring off season w/not much to talk about until Gordon announced this is his last season.