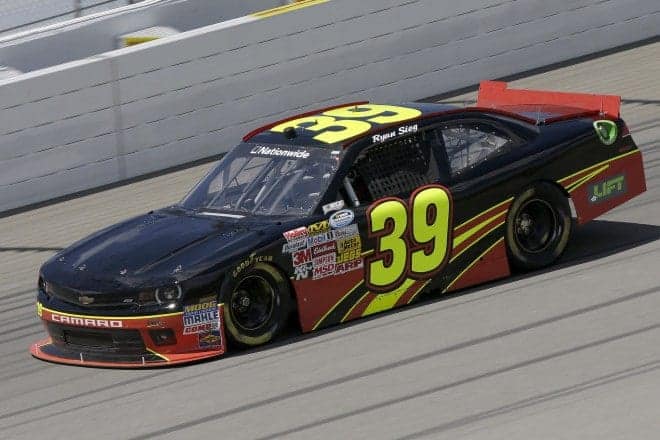 Early Wednesday morning, Georgia-based RSS Racing announced that it has re-signed with Uncle Bob’s Self Storage to a deal that will see the Buffalo-based chain of self storage facilities serve as the primary sponsor of Ryan Sieg‘s No. 39 Chevrolet in the XFINITY Series for 16 races.

The press release did not reference which 16 races that Uncle Bob’s Self Storage will serve as the primary sponsor.  However, it is confirmed that they will be on the car for their first race of the year in Daytona.

In addition, Uncle Bob’s Self Storage will be on the car in the remaining 17 races as an associate sponsor.

Sieg is confident that with additional sponsorship, he will improve his results in 2015.

“I am excited to be back with the NASCAR XFINITY Series full-time in the No. 39 and thankful to have Uncle Bob’s Self Storage backing me,” Sieg said.  “We feel like we can compete for a spot inside the top 10 in driver points and continue to grow RSS Racing to the next level.”

Uncle Bob’s Self Storage CEO David Rogers said he is very excited about the company’s move to get behind Sieg and RSS Racing.

“We are thrilled to be a part of the NASCAR Xfinity Series in 2015 with Ryan and the entire RSS team,” Rogers said in a press release.  “Our partnership in 2014 at Mid-Ohio was a success, and we’re looking forward to what this next step with Ryan and the NASCAR community will bring.  All of our 1200 Uncle Bob’s Self Storage employees are delighted to be a part of NASCAR’s large fan base.”

Uncle Bob’s Self Storage served as the primary sponsor of Sieg’s No. 39 in the Nationwide Children’s Hospital 200 at Mid-Ohio Sports Car Course in August.  There, Sieg qualified in 23rd and finished 16th on the 2.25-mile road course.