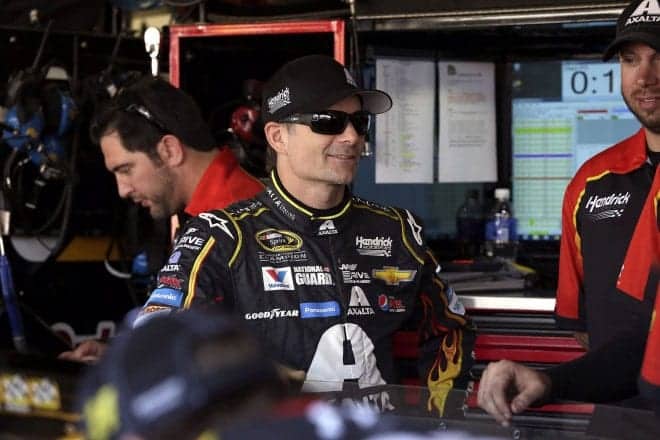 Welcome to the Frontstretch Five! Each week, Amy Henderson takes a look at the racing, the drivers and the storylines that drive NASCAR, and produces a list of five people, places, things and ideas that define the current state of our sport. This week, Amy has some things to keep an eye on as the 2015 season gets underway.

After the 2014 season, there were several drivers and teams left looking for more. For some, like Jimmie Johnson and Dale Earnhardt, Jr., it was the failure to live up to expectations. For others, like the Joe Gibbs Racing teams, it was the struggle to find something that was obviously missing for much of the year. For still others, like Jeff Gordon, it was watching the season slip away not because of a lack of performance, but because the powers that be deemed it so.

What they all have in common is that they enter 2015 with the burning desire to redeem themselves. They’ll hit the ground running, and that could be good for the fans in the stands and behind the TV sets. They’ll spark the kind of debate that gets fans excited to watch the next race. Anything a driver does to improve himself makes for better racing, and that’s something that can’t be generated with rules.

A lot to prove

It’s not just the teams who fell short of a title with something to prove in 2015. There are several drivers out there who could find themselves racing for their jobs if their performance doesn’t improve. Tony Stewart isn’t exactly in that boat because he owns his team, but he is staring down the years and a mountain of adversity after several surgeries for a broken leg and a tragic accident that sapped him emotionally in 2014. One of the other drivers in Stewart’s stable is on shakier ground. Danica Patrick has popularity on her side but the performance is missing, and it’s unclear how much longer GoDaddy will wait. You didn’t see Patrick featured in a Super Bowl ad this year, right?

Others under the microscope include Roush Fenway Racing‘s Ricky Stenhouse, Jr., who’s now entering his third Cup season with very little to show for it after winning the XFINITY Series title back-to-back in 2011 and 2012. Richard Childress Racing‘s Austin Dillon gets a little more leeway as he’s just entering his sophomore season, and because his grandfather owns his team, his seat is hardly in jeopardy. But sponsor dollars aren’t easy to come by, and backers are going to expect performance sooner or later. This group bears watching as the year wears on. If they don’t live up to expectations, it could get interesting.

Over the last couple of seasons, NASCAR’s middle class has grown to include a handful of teams who, while they won’t contend every week like the heavy hitters, will grab some decent finishes and even contend for a win if the stars align. Teams like Richard Petty Motorsports and Chip Ganassi Racing are joined by Furniture Row Racing, Germain Racing, and JTG-Daugherty Racing as teams looking to grab a Chase spot away from the big boys. With the exception of Ganassi’s organization, which is undergoing a rebuilding process, these teams don’t have the budgets to pull the numbers of a Hendrick Motorsports or Team Penske, but they could still make a statement. Where to watch them? Jamie McMurray and Kyle Larson have shown prowess on the intermediates (and Larson has potential to excel just about anywhere). Casey Mears is a talented restrictor-pate racer, as is Front Row Motorsports’ David Ragan. AJ Allmendinger won at Watkins Glen last season and is always a threat on a road course. Aric Almirola has had quietly strong runs at several tracks, including Daytona, where he won last summer.

The sport needs some new blood in the mix, and these teams can provide that. If fans are tired of the same old drivers in the spotlight, they should be thrilled to see some new faces among the predictable ones. Every sport needs an underdog with an outside chance, and for the first time in years, NASCAR has a handful of them ready to make a statement.

As the season kicks off, it looks like there will be up to 49 entries in the Daytona 500 and 44 or 45 cars at other tracks. After a season where nobody went home for much of the year, the sport could use a little drama in the competition department. While it’s unlikely that you’ll see a big name go home any given week, some teams will have to up their game on Fridays.

While it’s never a good thing for the teams who have to pack up early, the size of the field attempting the races is an important indicator of the health of the sport overall. And while we might not see the car counts NASCAR enjoyed a decade ago, numbers are improving, and that’s a positive sign of economic baby steps for a sport that’s been bleeding slowly for a number of years.

Finally, keep an eye on the list of possible free agents after this season: Jimmie Johnson, Denny Hamlin, Danica Patrick, Martin Truex, Jr., Jamie McMurray and Casey Mears. It’s an interesting group. Johnson probably isn’t going anywhere, especially with Hendrick Motorsports losing Jeff Gordon to retirement after 2015. The others, though? McMurray has always been at his best at Ganassi, but his performance is inconsistent. The team doesn’t have a driver looking ready in the wings, so McMurray’s fate could rest in part with the paths of other free agents. Mears has built his team from a start-and-park to a solid mid-tier organization over the last four years and is likely to stay put if the sponsor money is there; he and his team are by all accounts happy together. Truex doesn’t figure to have a ton of options unless his performance improves, but neither does Furniture Row Racing in terms of solid veteran drivers – that one could go either way.

Where it really gets interesting is with Hamlin and Patrick. As noted above, Patrick’s performance will be key in keeping her current sponsors on board or attracting new ones. If Stewart-Haas Racing can ink a high-dollar sponsorship package for Patrick, she’ll most likely have a ride as long as backers are willing to foot the bill. If not, though, SHR might look elsewhere for a more competitive driver. Does that road lead to Hamlin? It’s way too early to tell. Hamlin does seem like the most likely candidate to make a big move for 2016, though. He’s fallen short of the title twice in his current ride, and although he’s Joe Gibbs Racing’s senior driver and a title contender, he’s played third – and now fourth – fiddle to his teammates for years. Who could try to woo Hamlin? Possibilities include SHR (that could be even more likely depending on how Kurt Busch‘s situation plays out), but also Roush Fenway Racing or Chip Ganassi Racing. Watching for these free agent dominoes to fall will definitely be on the radar all season.

I would be stunned if Denny Hamlin was back at JGR in 2016. That team hasn’t been the same since the 2010 Phoenix race where they gave the championship away. I don’t count last year as a legitimate championship run-more of a case of being in the right place at the right time.
I think a change of scenery is in order. For Denny’s sake, it should be at SHR, which is essentially a branch of Hendrick. Sure, racing is cyclical but any of the others mentioned are a step back.
I could see Mears at Roush if Stenhouse Jr, runs 25th every week again this year.

Yeah a lot of those teams showing up for Daytona qualifying will fold quickly if they don’t get in the race. Their budgets require the inflated purse money from Daytona to continue. We’ll see how many are still showing up for qualifying by race 5. If past years are any indication, by race 10 there will be 44 teams at best attempting to qualify.

Daytona always brings out a big crowd for qualifying. What will be more telling is if those teams continue to have enough sponsorship to continue really racing or if they simply become start & park efforts.

Danica and Denny? Well who knows? Danica’s been able to continue to have mediocre results and claim that it equals improvement. I’m sure she’ll be in a race car just from the media standpoint as long as she can get sponsorship $. Denny, well, maybe mr. pouty face needs to find a new home.

Who cares? 286 days of points racing until Gordon is crowned champion by acclimation and manipulation of the “rules.”. My own goal is to NOT watch a single Cup race. Daytona should be easy. I have never been less excited about the beginning of a race season. NBA, I guess. Jigsaw puzzles. Reading War and Peace. NOTHING could be more boring than NASCAR 2015. BTW, who won the championship in 2014? I forget. Ryan Newman or Denny Hamlin?

Danica may be a dud as a performer behind the wheel, but, she is still the media darling. This means that Brian-The-Brainless will do whatever it takes to keep her in the #10 car. I’ve said this before and I will repeat myself, I would still like to see just one single race where this bimbo is pulled out, and Johanna Long got a chance to drive top equipment

As far as Little Ricky, Danica’s boytoy, is concerned, anyone want to bet he is out of the 17 before Daytona in July, and either bubba Wallace or Chris Buescher are given a chance in the car? Maybe both an a rotation plan?

All interesting questions. To your the list I would add Carl Edward’s new team, Brad Keselowski’s on-track relationship with other drivers, how NBC’s coverage impacts the sport from a broadcasting perspective.

I usually dont comment but I find it amusing that as much as you claim “My own goal is to NOT watch a single Cup race” its odd your commenting on an article that was put out literally in the middle of the off season..so are you just trying to be negative? it seems rather silly because for someone who seems to hate the sport, you sure enjoy commenting on articles; is it perfect no but seriously? no need to be so negative, and if you dont watch then honestly why should you comment? seems pointless troll to me