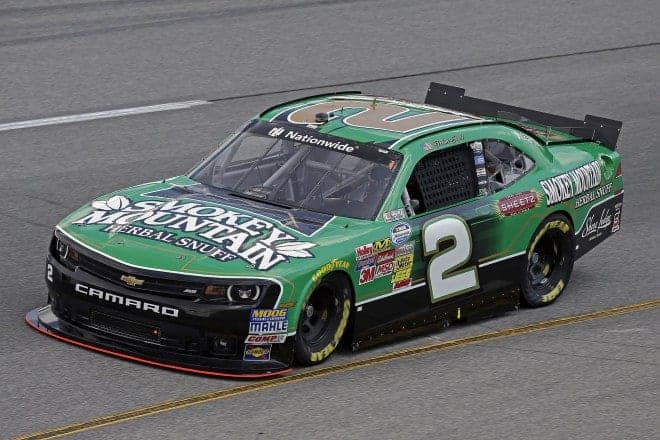 Brian Scott‘s relationship with Albertsons dates back to when Scott won his first career NASCAR race at Dover International Speedway in the NASCAR Camping World Truck Series in 2009. Today, at Daytona 500 Media Day, the two announced a reunion.

Albertsons, the second largest combined supermarket chain in America, announced Thursday (Feb. 12) it will sponsor Scott in the upcoming 2015 NASCAR season in the XFINITY Series, as well as in a limited Sprint Cup Series campaign.

The deal will feature primary sponsorship on Scott’s No. 2 NASCAR XFINITY Series car for Richard Childress Racing and his No. 33 NASCAR Sprint Cup Series car for Circle Sport Racing in a limited schedule

“Albertsons is a company rich with history and known for its quality supermarkets, innovation and people,” said Richard Childress, CEO and chairman for Richard Childress Racing. “Joe Albertson opened his first store in 1939 and built the company with a simple philosophy: ‘whatever you do, take care of the customer.’ It’s something we strive to do at RCR every day and we’re proud to represent the Albertsons’ legacy and their 250,000 associates. They are a terrific addition to our family of blue-chip partners here at RCR.”

“The partnership with Richard Childress Racing and Brian Scott is important to everyone at the Albertsons-Safeway family of stores,” Shane Sampson, executive vice president, marketing & merchandising for Albertsons, added. ”Joe Albertson and Richard (Childress) both began their respective companies with humble beginnings, but with a focus on ‘doing what it right for the customer.’ We are proud to have Brian Scott representing the Albertsons legacy both on and off the track and look forward to this coming season.”

Scott finished fourth in the 2014 NASCAR XFINITY Series point standings. He has made 175 career starts in the series and has recorded 14 top 5s and 59 top-10 finishes but is still left without a win coming into the season. He’ll run a limited schedule for Circle Sport in the Cup Series in a joint venture with Childress, having done so as well in 2014.

Scott will run the No. 62 for Premium Motorsports in the season-opening Daytona 500 in Cup next weekend.