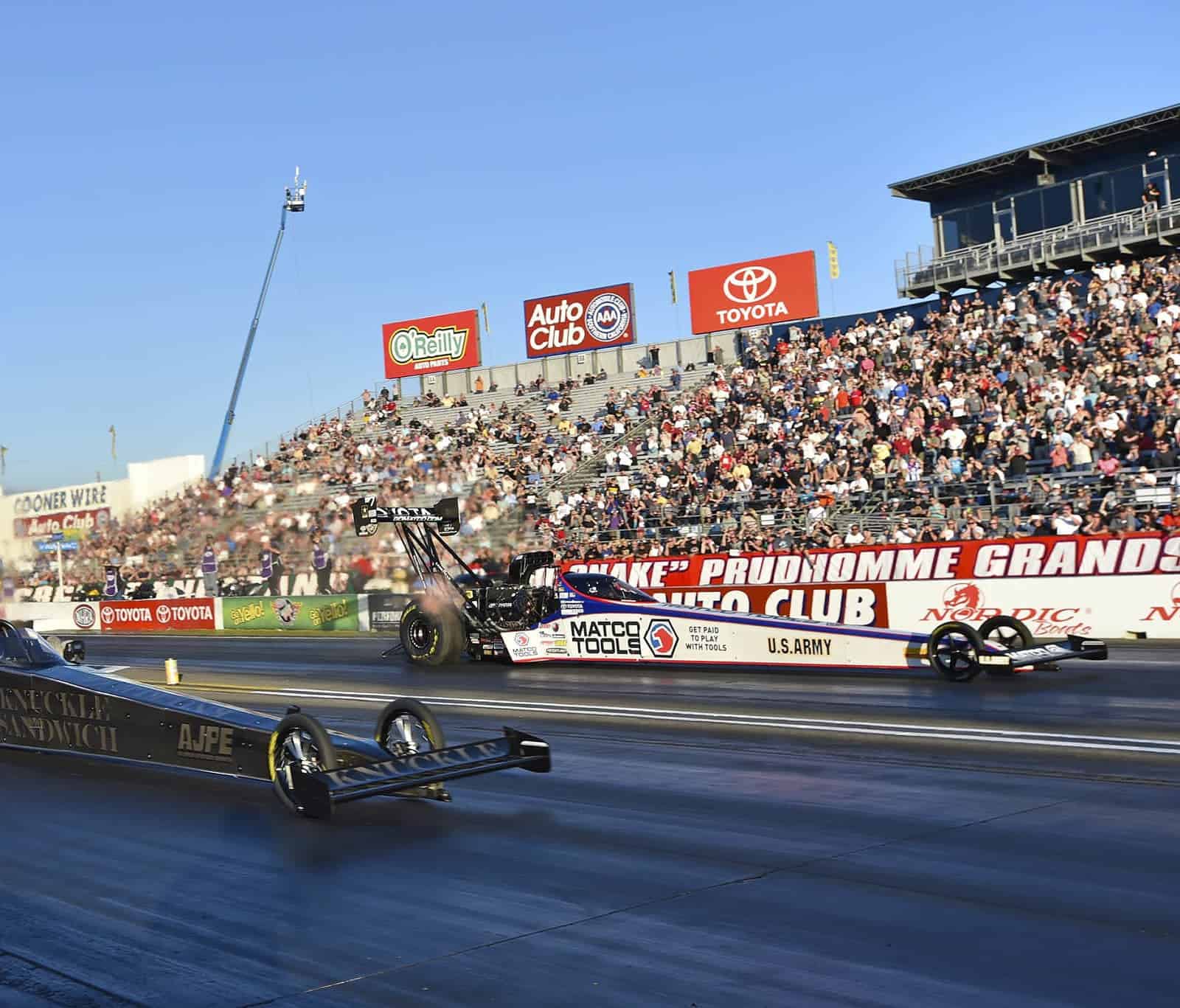 Frontstretch is pleased to announce our expanded NHRA coverage for 2015 and, as part of it, our new Nitro Shots weekly column. Check back every Thursday throughout the season for a new edition. Whether you are a longtime NHRA fan looking for a midweek drag racing fix or a newcomer who is just considering checking it out, we hope you will find something that appeals to you. Let us know what you think!

The NHRA Mello Yello Drag Racing Series 2015 season is now officially underway, and while Shawn Langdon, Matt Hagan and Jason Line have certainly gotten off to a fast start, the same can’t be said for everyone else. Top name drivers J.R. Todd, Tony Schumacher, Brittany Force, Cruz Pedregon, John Force, Alexis DeJoria, Greg Anderson and Vincent Nobile, who all expected to contend in their categories, instead went out in the first round.

So the season’s all over for them, right? No, not any more so than it is for NASCAR drivers who crash on lap one at Daytona.

Truth is, it’s a long season, and while everyone certainly hopes to charge out of the box with momentum on their side,  doing well at the first race, it’s not the end of the world if they don’t. The thing about drag racing is that, most likely, each title contender will go out in the first round somewhere this year. In fact, it’ll probably happen more than once. Sometimes, it’ll be because they or another driver had some difficulties in qualifying and they ended up stacked up against another strong car out of the box (Schumacher, who qualified sixth, lost to his own teammate and another championship favorite Antron Brown, who qualified 11th, so there’s no shame there). Sometimes, it’s because they just didn’t get a handle on that track, for that day or that run and beat themselves.

“Fast Jack” Beckman even missed the show entirely, failing to qualify at the Winternationals despite a revamped crew featuring new crew chief Jimmy Prock, the man behind so many wins at John Force Racing. But despite the ultimate disappointment to start the year, he had a great point of view on it all.

“I am disappointed, but I think a lot of our sport is about timing,” said Beckman. “If this was November and we didn’t qualify, I would be devastated. I think the reason that I’m not feeling that bad right now is that I recognize that there are 23 races left. We are going to do some fantastic stuff this year with the Infinite Hero team and we are going to challenge for the championship.”

So will everyone else we mentioned here. One bad weekend in NHRA doesn’t equal a bad year.

Driver of the Week: Courtney Force

2014 – Earned 100th victory by a female pro driver at the NHRA Kansas Nationals in Topeka. Force’s four victories in 2014 was the most by a female Funny Car driver in one season.

Some Things Most People Don’t Know About Courtney: Was a cheerleader at Esperanza High School; has a degree in communications; likes to cook.

On her relationship with fellow racer Graham Rahal (they got engaged over the offseason):
“It’s the first time that I’ve really met someone that has so many common interests with me. The coolest thing is that we both understand what we’re going through. We kind of had the same type of childhood. His dad out there racing, my dad out there racing. It’s kind of funny comparing stories and realizing how similar our lives have been. It’s a lot of fun having him out here and being able to talk racing to someone, have someone actually be able to understand it. Obviously, it is two different types of series. A lot of the time I’m still figuring out what the heck he’s doing out there. It’s just kind of fun to learn from each other. We’ve been able to talk belts and helmets and safety, little stuff like that that I’ve never really been able to talk to anyone else about. It makes for an interesting relationship.”

Shawn Langdon made the quickest ever pass in Top Fuel during qualifying for the Circle K NHRA Winternationals last weekend in Pomona, posting a 3.700-second run at 328.30 mph. However, the record book does not reflect this speed as the new national elapsed-time mark. Why? Because in order to set a record, NHRA rules state that you must “back up” a record-setting run for it to become official.

This rule means that sometime during the same race weekend, Langdon would have had to make another run with a time that is within 1 percent plus or minus of the first run. He would have needed a pass between 3.663 and 3.737 seconds. If he’d backed it up with a time faster than the 3.700, the lower time would be the national record with the 3.700 pass as the back up. Langdon was not able to get the run needed for the back up, though so it’s not an official record.

The official national record elapsed-time for a Top Fuel car, set by Antron Brown in Reading in 2012.

Nice to see NHRA coverage- Thanks !

Got addicted to NASCAR back in the early 60’s but – With NASCAR (since Brian) now totally micromanaging and manipulating EVERYTHING, – changing scores & standings periodically, I find their regular season totally irrelevent, – the musical chairs CHASE has always been ..irrelevent . . and now, that the absolute, quickest time turned in qualifying no longer earns the pole,–even QUALIFYING is no longer relevent.
When you have a season where the drivers with with most wins, AND the drivers with the most total accumulated points, were not even ELIGIBLE to play the “musical chairs, score changing, CHASE game”, – along with several occasions where not only the absolute quickest cars, but NEW TRACK RECORDS were set during qualifying (3 weeks in a ROW ) — BUT – THOSE cars were NOT on the pole , because —- ??? —— I just watch each race individually, — just to see who wins – -and totally ignore all the breathless references to the “dramatic (fabricated) fight for the mythical Championship — that doesn’t even HAVE a “CUP” awarded anymore.
They went from a Silver shower curtain to what ever that ice cream cone thing was that fell apart when they picked it up.
Thankfully, the NHRA still has SOME remnents of pure RACING !!

Thank you Ron! Nitro Shots will appear every Thursday. We’re happy to be expanding our NHRA coverage. Post race reports will continue to be part of the Pace Laps column and we’ll be posting breaking news as it happens. We’ll also be doing some trackside coverage and perhaps some NHRA folks will appear in our Beyond the Cockpit interview series.