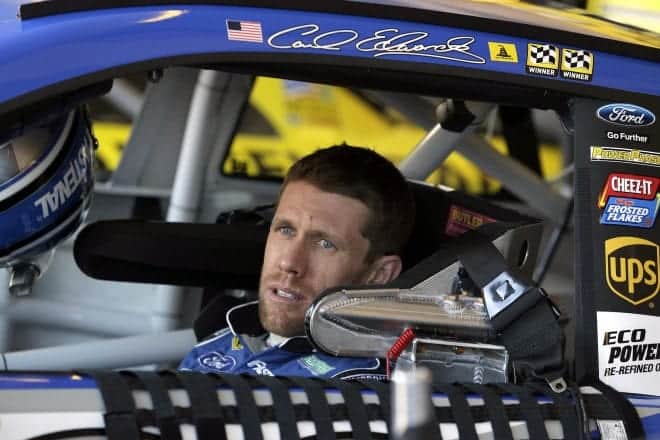 Carl Edwards finds himself in unfamiliar territory this weekend in Daytona, and it’s not just because he is with a new team this season.

Edwards, who moved over to Joe Gibbs Racing over the offseason after 10 years with Roush Fenway Racing, is not guaranteed a spot in next week’s season-opening Daytona 500. Edwards is beginning the 2015 season with a brand new team at JGR, driving the No. 19 ARRIS Toyota Camry, a team that brings with it no owner points from last season and nothing to fall back on if something goes wrong in qualifying or the Budweiser Duels.

Though it’s not likely a top team like JGR will miss the biggest race of the season, new team or not, the lack of security adds to the pressure for a driver who has already admitted a degree of nervousness heading into this weekend and the season as a whole.

“I believe that change in itself is good because it puts a lot of pressure on you,” Edwards said to a group of reporters during NASCAR Media Day. “I feel that right now and I’m actually nervous and I think that’s good. That’s a motivator and for me it’s an opportunity right now. I’m way outside of my comfort zone and that’s good. Hopefully it yields good results.”

That means more than one opportunity for Edwards (and many others who will need to qualify on time) to run into trouble with multiple cars on track at one time, much more treacherous than the more traditional one-car-at-a-time sessions that have traditionally been the norm for this race.

Is it likely? Not really. But is it a possibility given the history of large wrecks known as “the Big One” that occurs at large racetracks like Daytona International Speedway and Talladega Superspeedway or the tendency of this racetrack to be tough on engines? Definitely.

For Edwards, the beginning of this season is a mixture of uncertainty and excitement … but perhaps there will be a little more breathing room once the team is securely in the biggest race of the year.