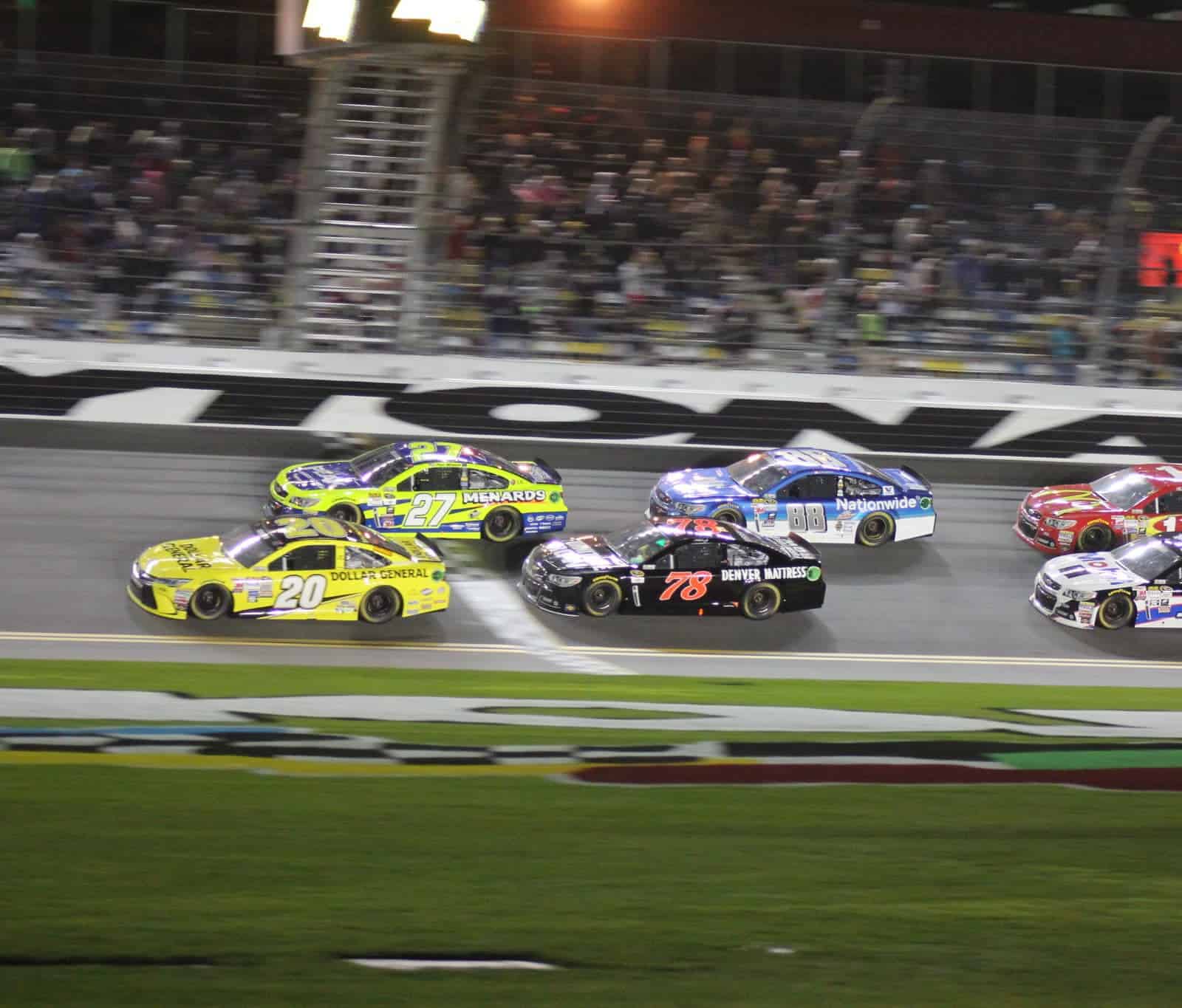 Everyone knows that in order to be successful at Daytona, you need a drafting partner. So, when a driver gets to the front without the built-in drafting partner a teammate can provide, it’s pretty impressive. Saturday night saw not one, but two single-car teams finish in the top four. Furniture Row Racing’s Martin Truex Jr. was especially impressive, pulling a power move to take the lead and then leading more laps than any other driver before finishing second. Germain Racing’s single-car effort also saw driver Casey Mears racing up front when it counted and finishing fourth. Debate all you want about whether they should have been in the race; the two still put forth an impressive effort and proved that they belong among the sport’s elite when it comes to plate racing.

On a restrictor plate track, the one thing drivers can’t escape is… other drivers. What would be a single-car incident at most tracks becomes a three- or four-car incident. What might have been a three- or four-car crash instead entangles a dozen or more. In other words, while you can be a victim of someone else’s mistakes anywhere, the probability of that happening at Daytona is much higher.

The action got started when Kyle Larson sideswiped Brad Keselowski and turned the No. 2 around, sending others through the grass to avoid the sliding machine. That one, which involved about five cars to some degree, was relatively mild. Later, Jamie McMurray got a touch loose and Greg Biffle couldn’t avoid him from behind. That one saw 14 cars get some piece of the action, varying in severity from Paul Menard‘s destroyed racecar to Mears clipping the apron. A late crash finished off a few more cars. The race was marred by a pair of red flags to clean up the carnage.

The field was decimated by the time the checkered flag finally flew. Whether or not that was a good show for the fans is debatable, as some people love the Big One while others would just as soon see Daytona and Talladega go the way of the dinosaur. It was easy to see by the end of the night why a couple of teams opted to sit out; the money earned for the lower finishing spots didn’t pay for the wrecked cars that finished there.

Menard enjoyed the luck of the draw, taking the top starting spot. Defending race winner Denny Hamlin had a top-10 starting spot as well. Early on, things looked good. Menard led the opening seven laps and Hamlin was angling for a run. Then lap 45 happened, and both Menard and Hamlin ran out of luck. Hamlin finished 19th and Menard 21st in the field of 25. It’s not the start they were looking for in 2015, as they both head to the Daytona 500 looking for redemption.

While some of the drivers in the field proved they belonged during the race, it’s certainly questionable whether they really belonged there in the first place. In an effort to expand the field to 25 (why that was necessary is also questionable), NASCAR included the 16 Chase drivers from 2014, 2014 pole winners, and anyone who has won either a Daytona 500 pole or a past version of the Unlimited. Any unfilled spots were filled by 2014 driver points. The Daytona 500 pole rule could be construed as NASCAR’s attempt to assure that a handful of popular drivers, including Danica Patrick and Austin Dillon, made the field (though Dillon would have made it on 2014 points). That’s also how Truex made the field. Menard, Mears and Ricky Stenhouse Jr. were all made eligible to race when others opted out. Clint Bowyer made the cut when his teammate Brian Vickers was not medically cleared to race until next month following heart surgery. David Gilliland and AJ Allmendinger did not run because the cost outweighed the benefits, and Brian Scott didn’t have a ride. In a nutshell: a bunch of guys (and a girl) in the mid-20s in points got in because either NASCAR wanted them there or wanted a fatter field.

And while it’s not part of the Unlimited, I’d be remiss if I didn’t mention group qualifying for the Daytona 500 that took place Sunday. That went so far sideways it was facing the wrong way as the format designed to increase the entertainment of qualifying increased both cars sitting around on pit road and wrecking each other instead. One team whose only chance to make the race was to race their way in saw their only car destroyed in their session. They don’t have a backup car. At least the others caught up are a bit more fortunate on that front, but teams have spent months preparing these cars, only to see many of them torn to shreds before the field is even set for the Great American Race. This is supposed to be entertaining how, exactly?

Seemingly more common in plate racing recently, it’s hard to make a run on the leader late in the race. Does that come from drivers not getting help or from recent rules changes to prohibit two cars drafting together? It’s probably a little bit of both, but whatever it is, it doesn’t make for very exciting racing. I’m sure there are drivers who would rather take the finish they get than help another team or make of car to the front. If someone is afraid to go in a pair because NASCAR might take away their win, that’s another problem. Plate racing gets enough criticism for teams hanging back for most of the race, and if they’re not making enough of a run at the end to make the finish exciting… well, it’s just not much of a race. The only guy smiling now is the one leading at the white flag. Once upon a time, he was nothing short of completely screwed. Now, he’s sitting a whole lot prettier.

Furniture Row Racing; Truex (No. 78 Furniture Row Racing Chevy): Truex made an impressive solo power move to the front in the first segment to take the lead, and he held onto it. Truex led 26 laps, most of any driver, and finished second when the dust cleared. After a 2014 plagued by bad luck, is the tide turning for this team?

Germain Racing; Mears (No. 13 GEICO Chevy): Mears produced a solid fourth-place effort despite having little drafting help. In a way, perhaps Mears can take that as a compliment; he’s an outstanding restrictor-plate racer, and teams don’t often want to help someone they perceive as a direct threat. If he can hook up with someone near the end, he’s got a real shot at winning one of these things before the year is out.

Matt Kenseth put on a clinic out there and I am sure that if his name was Earnhardt or Gordon you would be extolling the virtues of the Sprint Unlimited and restrictor plate racing in general. When are you media types going to understand that Kenseth and Johnson are superior drivers who just don’t supply you with enough juicy quotes to make your jobs real easy. And, by the way, stop yelping for shorter races. Only TV wants shorter races. If they had their way, we would red flag the races every 25 laps for commercial breaks like they do on football telecasts. I like racing because the action is continuous. Ever tried to sit through a pro football game in the stadium these days? These races are supposed to be marathons because that is the only way to involve the builders of the cars in the actual race. Those guys work their tails off because they know that everything they do can impact the driver and they should be rewarded with involvement on race day. Okay, I think I am finished with my rant now. Thank you.

The sprint unlimited is really a worthless exercise these days because they’ve watered down the field by adding drivers based on popularity, not on skill.

Qualifying for Daytona was a mess, it was so screwed up, it was silliness personified and MY favorite is on the pole and I’m saying that.

then of course we get Steve O’Donnell out there afterwards telling everyone who was upset (drivers and fans) how much NASCAR appreciates our “passion”. Oh man that was so sad. Yeah, NASCAR respects our opinions, that’s why the continue to do stupid stuff and tell us how much we all like it.