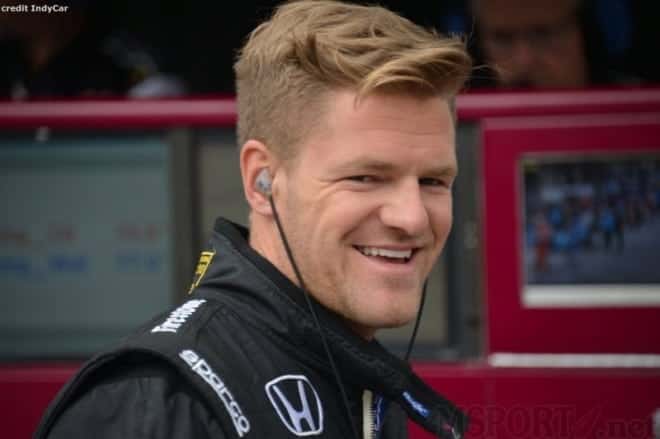 James Jakes is back in the IndyCar paddock.

The move comes less than a week after Jakes tested with SPM as part of an IndyCar-sanctioned two day test at NOLA Motorsports Park. Jakes made a strong impression on the team’s engineers and teammate James Hinchcliffe, earning himself the ride.

The 27-year-old driver worked his way through T-Cars, Formula Renault, Formula 3, GP 2, and GP 3 before joining Indycar in 2011. Driving for Dale Coyne Racing, Jakes competed in 31 of 32 events in two seasons, posting a high finish of eighth at Toronto. Jakes left Dale Coyne Racing for Rahal Letterman Lanigan Racing in 2013. Jakes posted a career-best finish of second at Belle Isle with the team, but struggled to a 19th-place finish in points. Rahal Letterman Lanigan Racing decided to look elsewhere in 2014, leaving Jakes with no ride until this announcement for 2015.

“First of all, a big thank you to Schmidt Peterson Motorsports for giving me the opportunity to test last week in NOLA after 16 months away,” said Jakes. “I’m extremely excited and motivated to drive the No. 7 Honda SPM Indy car in 2015.

“The team has done a fantastic job over the past few seasons, and I look forward to continuing that progress,” he added. “I believe that – between myself and James (Hinchcliffe) – we can really push the team to the top of this sport. I’m excited to be working alongside him as we look to help Honda in maximizing the new aero kits. It’s going to be an exciting year, and I cannot wait to get started in St. Pete.”

SPM co-owner Sam Schmidt was excited about the announcement, despite Jakes sitting on the sidelines in 2014.

“We are pleased that James will be competing with SPM in the No. 7 car for the 2015 Verizon IndyCar season,” said Schmidt. “The goal of the team when it moved to Indycar in 2011 was the get to the point where we had two veteran drivers in the car, capable of pushing each other. This finally checks that box.

“Even with 16 months out of the car, James was immediately up to speed at NOLA last week and contributed to the successful test of the team,” Schmidt added. “We look forward to continuing that tradition that has been established over the past three seasons of winning races and competing for the championship.”

Team co-owner Ric Peterson also took a minute to comment on the announcement.

“We’re confident that James will be a great addition to the SPM team. He knows the Indycar landscape and he has impressed us, both in and out of the race car,” said Peterson. “Over the past several years, we have aimed at developing a group of talented drivers who fit seamlessly into the culture of our great team. We feel that James meets those criteria and we’re happy to welcome him to SPM.”

Schmidt Peterson Motorsports was forced to rebuild their roster after losing four-time winner Simon Pagenaud to Team Penske. Rookie Mikhail Aleshin also left the team after having issues with sponsorship. Jakes will be joined by teammate James Hinchcliffe, who won three times in 2013 for Andretti Autosport.

A native of Leeds, Great Britain, Jakes will return to the No. 7 for SPM when IndyCar tests at Barber Motorsports Park on March 16-17. The 2015 season will kick off the next week, when the Verizon IndyCar Series returns to the streets of St. Petersburg, Fla. for the Firestone Grand Prix of St. Petersburg on March 29.

No sponsorship details have been announced at this time.