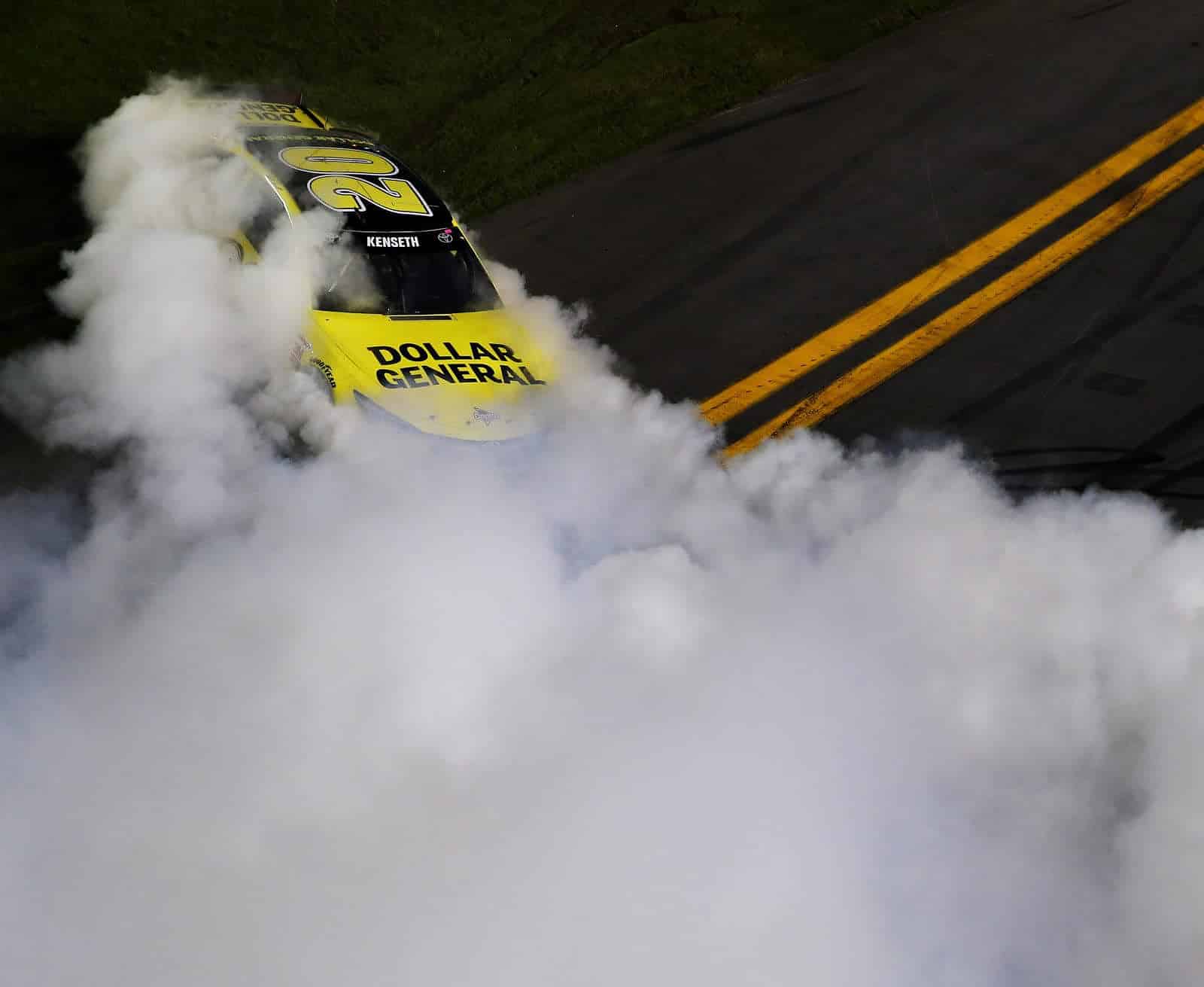 Editor’s Note: Jeff Wolfe takes over our Hot/Not column this year. Come back every Tuesday to see his take on the sport along with which NASCAR drivers are trending up… or down over the last few weeks of racing.

Burnouts (Hot)
Matt Kenseth went without a win in 2014, so maybe his victory in the Sprint Unlimited is a sign of better things to come for the No. 20 car. However, before we get too excited about results from this past weekend, and about whatever may happen this coming weekend, remember what happens at restrictor plate tracks is no real indication of what will happen for the rest of the season. That being said, nobody’s ever given back a win of any kind at Daytona.

Saturday night is still all right for fighting. Well, it wasn’t really a fight, but defending champion Kevin Harvick’s post-race interaction with Joey Logano is a pretty good sign that Harvick isn’t going to be fat and happy (in the figurative sense) with having just won the title. Whether Logano really did anything wrong or not, only he and Harvick know. But the fact that we have a chippy champion is just another reason to look forward to 2015.

Let’s not forget that Carl Edwards also had a good run in the Sprint Unlimited (third). He’s on the hot side of things largely because of what Harvick and Kenseth have done the past two seasons when they moved to new teams. Kenseth won seven races and finished second in the points in 2013 in his first year with Joe Gibbs Racing. Then, Harvick won the title last year in his debut season with Stewart-Haas Racing. That trend alone tells us Edwards will be a title contender again this year. But there’s more to it than simple numbers. When a driver has not had as much success as he would like, then switches to a new team/crew chief, he or she is all ears when it comes to trying new things to find success. And the new drivers also want to make a good impression early on with their new teams, so they are going to be a little more patient than maybe in the past. So, I wouldn’t be surprised if that holds true with Edwards this year, too.

First, Jeff Gordon won a tricycle race at a Washington Wizards game to promote the Daytona 500. Now, he’s on the pole for the big race. Pretty good start to his final full-time season in Sprint Cup.

Tire Rubs (Warm)
Dale Earnhardt Jr. looked pretty strong at times in the Sprint Unlimited, but didn’t have quite enough to get to the front late in the race (ninth). However, Junior said his Daytona 500 car is way faster than his Sprint Unlimited one. Oh, the joy of unlimited resources that Hendrick Motorsports can provide, right? There are probably some others in similar situations that have better 500 cars, too. But when Junior is feeling good about his chances, it’s certainly worth noting.

Tony Stewart seems to have turned the page on his past two seasons of injury and tragedy. He’s at least seemed to be his old rascal-type self in media appearances and then, at the Sprint Unlimited, he charged from near the back of the pack into contention in the first 15 laps. In his best days, Stewart was never one to sit back and wait at these plate races. It was a good sign for Smoke fans to the see the No. 14 making whatever moves he could to at least try and get to the front Saturday night.

In The Cooler (Cool)
Greg Biffle’s start to 2015 was certainly not what he wanted. First, he got into the rear of Jamie McMurray at the Sprint Unlimited, causing an accident. Biffle said McMurray was loose before he tapped him, while McMurray said Biffle made his car loose (so who really knows for sure?) But things didn’t get any better for Biffle later in the race when he was involved in another accident and took a seriously hard hit to the inside wall at Daytona. As Brad Keselowski tweeted later that night, that wall is placed at a bad angle for cars, but luckily, it did have a SAFER barrier and not the old concrete wall or traditional fencing, so Biffle was OK. But Biffle likely felt the effects of that hit for at least a couple of days.

First, Ricky Stenhouse, Jr. showed up this year with the business up front, party in the back haircut (otherwise known as a mullet), a move which didn’t exactly sit well with girlfriend Danica Patrick. Then, in the Sprint Unlimited, Stenhouse was going along in the middle lane by himself and lost control of his No. 17 car, an incident that almost gathered Patrick and did gather in Austin Dillon. It’s a rough start for a driver whose performance this season will likely dictate his long-term future in Sprint Cup.

Parked in the Pits (Cold)
I probably won’t mention ARCA races here much, but when you see a first, it just can’t be ignored. It was certainly accidental, and a wonder it’s hasn’t happened before, but a flagman dropped a flag onto the track during the ARCA race Saturday. Now, if this incident happened in the later stages of a Sprint Cup race and, say, Junior was a lap down and in line to be the Lucky Dog, wouldn’t it be great to hear the conspiracy talk then? Maybe NASCAR will come up with some type of glove or strap for flag holders to use so it won’t happen for their races.

The Sprint Unlimited is without question a made-for-TV event, so just how many fans are actually there to watch it is not of premium importance to NASCAR. However, there were so few fans there Saturday night, you really wonder if it’s worth it to even stage the event. With the no-testing rule, it was probably valuable for most teams to get in some time in race conditions. But it would be nice to see at least a somewhat decent crowd there.

The large majority of drivers and fans railed against the group qualifying format at Daytona. Sure, their points were legitimate and I’m not disagreeing with any of them. But I will say one thing about Sunday’s qualifying: Unlike in past years, when I would be flippant about the process, maybe tuning in late to see who was going to be on the front row, I watched every second of it from start to finish.

The NASCAR qualifying system for the Daytona 500 is one of the most confusing things in all of sports. I will watch the qualifying races Thursday night and enjoy them. But other than the first and second spots, don’t ask me to explain (and please don’t try to explain it to me either) how drivers qualify for their spots for Sunday. I will just look at the lineup late Thursday night or Friday morning. It’s just easier that way.

See, this is what is wrong with the current fan base of Nascar..an obvious deflection of the product of the track. Why is it that a proven “bully” on the track has a problem with a another driver, it is ALWAYS the “other driver”? Is it because the Nascar “press” is so reined in as to what they honestly can report or not, this is fair game or valid? This is a incestuous industry, they give YOU access, YOU make nice. I pray for the sanity of this sport and survival, the truth be told. The industry of reporting is too dependent, it doesn’t make for balanced and fair reporting.