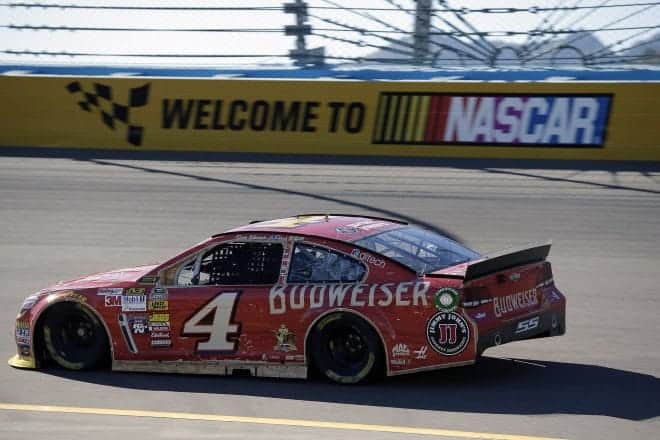 Editor’s Note: Danny Peters’ column, a Frontstretch staple returns this week and will run in its usual Tuesday slot all season. Usually titled Five Points to Ponder, this week’s season-opening one is a special edition, in a special format taking a look at the departure of title sponsor Sprint.

From cigarettes to cell phones. What’s next for NASCAR?

Coming off the back of a revamped and frenetic playoff system, peaking with a thrilling conclusion at Homestead-Miami Speedway, the mood at the conclusion of the 2014 season was one of justified optimism. The first-time champion, Kevin Harvick, a 14-year veteran with 28 wins in his 502 top-echelon starts, was a worthy winner and the new Chase format was deemed an albeit contentious success.

Then came the news in mid-December from the series’ title sponsor, Sprint, that the telecom giant would not be seeking a renewal to their sponsorship when rights expired at the conclusion of the 2016 campaign. Sprint had originally assumed the contract in 2008 after a 2006 merger with NEXTEL, who themselves had replaced longtime series sponsor Winston at the start of the 2004 season in what was then a ten-year deal.

No question, the market was very different when the rights previously came available over a decade ago. So the question of who will be next is an intriguing one. The new title sponsor assumes duties in what will be a crucial role at a critical time.

It’s an interesting pivot point for the sport as a whole. NASCAR is a sport in which a major sponsor can dive in at levels rarely, if at all, available in any other major sport sponsorship. It’s an on-site activation extravaganza and an incredible way to grow brand – and product –awareness not to mention turning prospects into customers and customers into loyal, brand ambassadors.

In the positive column for the sport, there is a ten-year, $8.2 billion dollar TV contract with FOX and NBC. Comcast’s XFINITY brand has inked a ten-year deal to sponsor the second series, while Camping World’s backing of the trucks was extended to 2022 midway through last year. TV audiences ran to an average of about 4.5 million across the ten-race Chase and although there were significant declines for some races, overall the audience has stabilized for now. Put another way, all but one of the other constituent parts and pieces are in place for the long haul. NASCAR just needs a title sponsor to complete the set.

So, what are the implications and ramifications for the company that replaces Sprint? Let’s start with the financials. The incoming title sponsor of the Cup Series will need to pony up a hefty annual sponsor fee; NASCAR will surely look in the current range and higher, so that’s around $75 million per year for starters. The title sponsor also provides the end-of-series points fund which last season was about $22 million; you can tack something in the region of $15 million for an appropriate advertising campaign. And given the ten-year mega TV deal, you’d figure NASCAR would be looking for a commitment in that 8-to-10 year range. That could be a billion dollar decision for a Fortune 500 company before we’ve even considered on-site activation.

On-track, 2015 will mark the 24th and final full season for the Jeff Gordon and his illustrious four-title, 92-win, 761-race (and counting) career. The sport’s most popular driver of the last 12 years, Dale Earnhardt, Jr., roared back to relevance with four wins and a run into the playoffs, including an emotional Daytona 500 victory. Jimmie Johnson will look once again for a seventh and record-equaling title while the likes of Kyle Busch, Joey Logano and Denny Hamlin will all be in the mix for a maiden championship. Those are pretty good selling points when it comes to what viewers might see in any given year.

But back to the activation piece: the new title sponsor needs to get fully immersed and that means at every level throughout the sport. The immensely loyal and still huge audience, even if the overall numbers have slipped from the heyday of the early 2000s, paired with a sport that spreads over 40 of the year’s 52 weekends presents an enormous chance to sell your product to the NASCAR fan base and at the very least a golden opportunity to generate significant brand interest and consideration.

With that in mind, a new title sponsor is probably looking at an annual outlay of $125-$150 million – perhaps even more, and a cadre of dedicated staff to ensure the work gets done. Very few companies spend at this sort of level in sports marketing terms. Essentially, you’re looking at the top end of the very upper tier of the Fortune 500, but you can be sure NASCAR will do their due diligence in marketing the product. There is the possibility of an outlier, a company seeking to grow brand share but given the numbers we’re talking about, it would be a bold move for an up-and-coming corporation to get involved.

So, who might be possibilities to assume the crown that Sprint will vacate at the end of the 2016 season? I’m going to give you four, and I’m certainly interested to hear your opinions in the comments section below.

I’ll start with Wal-Mart, the multinational retail corporation whose reach stretches to some 11,000 stores in 27 countries under a grand total of 71 different brands. Wal-Mart is the world’s largest company in terms of revenue and also the world’s biggest employer with over 2,000,000 employees throughout the 27 countries they operate in. It is, then, fair to say they wouldn’t struggle to pony up the necessary funds. The largest retailer in the world would, through the sport, have an excellent opportunity to add to the bottom line. A few years back in July 2012, the 1985 champion and Hall of Famer Bill Elliott drove a Wal-Mart-sponsored car to 37th place at Daytona. It was an event that Yahoo! Sports Jay Busbee described as “pretty much the most NASCAR thing ever.” By the same dint, then what would be more NASCAR than Wal-Mart taking over from Sprint as title sponsor?

Another company that might consider taking up the reins is Microsoft. Listed at 34th on the 2014 Fortune 500 list, the NASCAR fan base would be fertile ground for selling their range of products and in a world where Apple appears constantly on the rise, it would be a nice stake in the ground for the Redmond, WA-based company, the world’s largest software maker (by revenue). And while I’m considering this sort of partnership, Samsung would be another interesting choice. With a wide array of consumer electronics in their extensive portfolio, NASCAR would provide the company a fantastic showcase for their wares. It’s not like they haven’t made a foray into the sport already, posting up money for title sponsorship of one of the two Texas races from 2002-12.

I’ll finish up, however, with a company that could be a perfect fit to fill this role for NASCAR – namely, Bank of America. Based in NASCAR’s spiritual home base of Charlotte, NC, BoA is the 21st largest company (by revenue) out there. They’re already entrenched in the sport, serving as the official bank of NASCAR and title sponsor of the Charlotte Chase race since 2007. Would a step up to the title sponsorship be out of the question? I’d argue not. NASCAR Bank of America Cup Series has a nice ring to it, don’t you think?

So there you have it, my top four choices for title sponsorship. As I said earlier, it’s an absolutely massive decision for NASCAR. A fully integrated top-tier sponsor can bring so much good to the sport, so many positives, that it’s a decision they can’t afford to get wrong. One thing is for sure; it will be fascinating to watch it all unfold over the coming months.

Enjoy the Great American race, folks. I, for one, can’t wait.

Walmart is definitely the logical choice, especially if they can somehow get exclusive Marketing Rights for all “off-track” NASCAR souvenir/merchandise sales. (Not sure about the “exclusiveness details” of NASCAR’s newest “at track” merchandise agreement.) NASCAR needs Walmart more than Walmart needs NASCAR.
From an accounting perspective… $2 Million Dollars per week in increased profits just to break even, IS a huge nut to crack even for a company the size of Walmart. Over a ten year + period, it almost seems insane that NEXTEL/Sprint agreed to such a commitment. ROI IS KING!

Oh I’m sure NASCAR will con some other big company into funding the catastrophe that the Cup series has become. Wal-Mart is a good one, as noted by Robert.

Hey falling ratiings and attendance, having to remove seats or cover them up, NASCAR is a great marketing opportunity.

I don’t see Walmart as being the savior, and thats what a series sponsor is, of Nascar. They have been increasingly trying to move a little more upscale, as their market is being nibbled at by the even more low priced competition. Can Nascar provide that? Probably not.
It will probably need to be a technology company, number 2-4 in their field. For them it may be worth taking the chance.