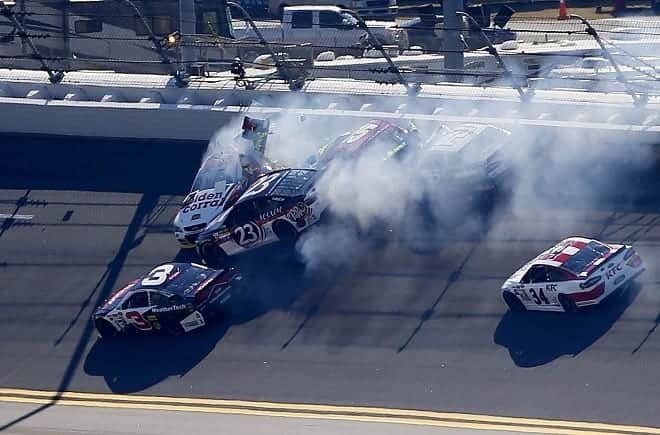 Things got a little extreme Sunday afternoon for several teams and drivers during round one of qualifying for the Daytona 500. While running in a heavy pack, Reed Sorenson and Clint Bowyer ended up crashing, causing some controversy on the qualifying format.

Luckily,  back in North Carolina, the team quickly got together and are now in the process of applying the finishing touches to the backup No. 44 Golden Corral Chevrolet. The mini break will allow them just enough time to have it ready to go for Thursday’s Budweiser Duel 150s.

“A good speedway car is hard to come by,” said team owner John Cohen in a press release. “ As a smaller team, we buy our cars from the mega teams and once they have a good speedway car, that car is kept and used many times.”

The team is one of the six teams who still need to lock into the race on Sunday. In order to get into the race, the No. 44 Chevrolet will have to finish inside the top 15, something that’s very do-able for a small team at Daytona. Along with Sorenson, David Ragan and Ryan Blaney are the two other drivers who need a top-15 finish in the Budweiser Duels.

“The wreck in qualifying was extremely disappointing but seeing the efforts of everyone on Team Xtreme as they get our backup ready – man, I am excited for Thursday’s Duels,” Sorenson said in a release. “There is a lot of pressure to race our way in to the 500 but after seeing the support of NASCAR fans on Social Media the past few days, we already feel like winners in their eyes.”

It will mark Sorenson’s sixth career start in the Daytona 500 on Sunday if he makes the race. In 2008, driving for Chip Ganassi Racing, Sorenson brought home his best Daytona 500 finish of eighth. A year later, after moving over to the Richard Petty Motorsports organization, he brought home a finish of ninth.