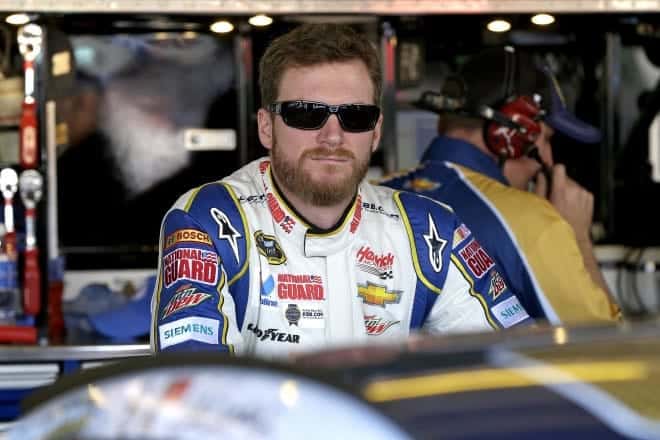 Dale Earnhardt, Jr. is back on top at Daytona. After starting from the rear, Earnhardt pulled himself all the way up front and led a Hendrick Motorsports one-two finish in the first Budweiser Duel. Penske Racing’s Joey Logano tried to spoil the party, getting up to second entering the final lap but couldn’t make the move that could loosen up the No. 88 and give himself a shot.

“TJ Majors deserves a ton of credit,” Earnhardt said in victory lane, giving credit to his spotter on keeping him out front late. “Gave me the information I needed to make the moves I needed.”

Earnhardt’s drive coincided with a late fade by Matt Kenseth. The dominant car early on, Kenseth led a race-high 32 laps but was the lone Toyota fighting up front down the stretch. Freight-trained by the pack, he could never get additional help and will be forced to use his qualifying speed or a provisional to make the race, winding up 17th.

Behind Earnhardt, Gordon, and Logano was Clint Bowyer, surging to fourth after hanging in the back of the pack much of the race. Bowyer, Kevin Harvick, Kasey Kahne, Jamie McMurray, Landon Cassill, and Cole Whitt rounded out the top 10. Paul Menard was 11th, followed by Michael McDowell, JJ Yeley, Michael Annett and Kyle Larson, who fought back from late-race crash damage to wind up 15th. Rookie Ty Dillon earned the final transfer spot, edging out Kenseth at the line to earn his first Cup start in the Great American Race.

“This is so awesome,” Dillon said afterward. “You don’t know how much this means to me.”

There were three cautions for 13 laps in this Duel, all for smaller incidents. Perhaps the biggest came when Johnny Sauter and AJ Allmendinger made contact, sending the No. 83 of Sauter through the grass and ending the night for both drivers.

“It just sucks,” a frustrated Allmendinger said after the incident. “I hate this [type of] racing. I really do.”

Those two will join Kenseth, Brad Keselowski, Aric Almirola, Trevor Bayne and Casey Mears in waiting out the second Duel to see where they’ll start in the Great American Race. Justin Marks and Ron Hornaday, after failing to reach the top 16, have officially failed to qualify for the event (their owner points and qualifying speed are not high enough to make the race.)