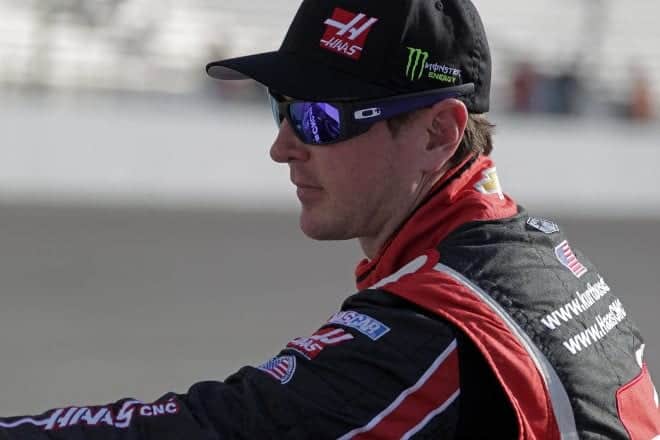 Looking for official statements on the Kurt Busch situation, all in one place? Click here.

Update: NASCAR issued a release at 6 PM Friday suspending Busch indefinitely. The sport cited Section 12.1.a (actions detrimental to stock car racing) and Section 12.8 (Behavioral Penalty) in their decision, one they said was based on the Family Court of the State of Delaware’s decision Monday. The Order of Protection from Abuse, issued against Busch pertains to ex-girlfriend Patricia Driscoll.

“[Busch] will not be allowed to race nor participate in any NASCAR activities until further notice,” the sanctioning body said in a statement. “Kurt Busch and his Stewart-Haas Racing team are fully aware of our position and why this decision was made. We will continue to respect the process and timetable of the authorities involved.”

The details of the Kurt Busch – Patricia Driscoll case were released Friday afternoon, in which Kent County Commissioner David Jones concluded that an act of domestic violence occurred. Both NASCAR and Stewart-Haas Racing had no comment initially as they absorb the details of the decision, one that caused a protective order for Driscoll against Busch to be put in place. The driver has also been ordered to be evaluated for anger management issues.

“Abuse is established by a preponderance of the evidence when the evidence establishes that the abuse is more likely than not to have occurred,” Jones said in his decision. “In other words, if the Court finds that the probability that the Respondent committed an act of abuse on the occasion alleged in the Petition exceeds fifty percent, the Court is required by statute to enter an Order restraining Respondent from committing acts of domestic violence against the Petitioner and granting such other relief as the court finds necessary or appropriate.”

That means, for Jones to rule against Busch there needed to be at least a 50 percent chance, in his mind that domestic violence occurred. After a volume of information gathered on the matter, four days of grueling testimony, that’s what he concluded.

“The court is satisfied that the evidence presented at trial established that it is more likely than not that on September 26, 2014, Respondent committed an act of abuse against Petitioner by manually strangling Petitioner with his left hand on her throat, strike the interior wall of Respondent’s motor home, thereby recklessly causing physical injury to Petitioner and recklessly placing Petitioner in reasonable apprehension of physical injury,” he wrote. “The Court further finds that Respondent’s actions on that occasion constituted conduct that a reasonable person would find threatening or harmful.”

Much of the case has centered around both sides disputing testimony. Busch, who claimed Driscoll was a trained assassin, also claimed she was intentionally manipulating the case in an effort to bring down his racing career. Commissioner Jones believed in his decisions that both sides showed lapses in trust, noting Driscoll’s false claim Motor Racing Outreach pastor Nick Terry had been offered money by the Busch camp to secure his testimony. That belief ultimately turned out to be untrue. However, when faced with a choice between the former couple, Jones decided to side with Busch, pointing out physical photographs and text messages backing up the timeline of the domestic violence incident that have not yet been publicly reported.

Jones also believed certain witnesses in the Busch camp were not creditable, weakening his case against Driscoll.

“In an effort to discredit Petitioner and to support their contention that the allgeations of abuse and her trial testimony are unworthy of belief, Respondent presented the opinion testimony of Charis Burrett [known Busch since 2008], who testified that based upon her knowledge of Petitioner’s reputation for truthfulness or untruthfulness, Petitioner’s testimony under oath should not be believed,” he wrote. “Likewise, Kristy Cloutier [Busch’s decade-long administrative assistant] testified that, in her opinion, Petitioner should not be believed. The Court finds the testimony of Mrs. Burrett and Ms. Cloutier regarding their opinions of Petitioner’s credibility to have been so dramatically tarnished by their obvious bias and personal financial interest in Respondent’s public image and racing career which, according to Respondent and his counsel, could be irreparably damaged if he were to be determined to have committed an act of domestic violence… their opinion testimony is unworthy of consideration by the Court in determining Petitioner’s credibility.”

The release follows Driscoll’s appearance on morning television this week, including ABC’s Good Morning America and FOX’s Fox and Friends. In her GMA interview with Michael Strahan, she alleged additional abuse from Busch in 2012, an incident she never reported to police.

Busch’s attorney, Rusty Hardin, has asked to reopen the protective order but no ruling has been given. Busch has qualified 24th for Sunday’s Daytona 500 and must start the race to remain eligible for the NASCAR postseason under new rules announced this week.

If she was found to give false testimony, isn’t that perjury?

And if she DID help some members of Congress, like she wrote about, then there’s serious power backing that girl to keep secrets.

Easier to blame Kurt who has a history of anger and stupidity. But that doesn’t mean that he wasn’t telling the truth.

Dust off your “troubled superstar” hit piece, circling sharks everywhere. You got what you’ve been lusting after.

I’m calling conflict of interest here. O’Donnell was on the board of the purported victim’s charity until last year.

This case, in my opinion, gets the state of Delaware sued. What a person does for a living should not a bias as part of a legal decision.

I also do not condone what Mr. Busch, (nor do I care for him) supposedly did do that day, but this water is so muddy and murky its sad for all involved.

I’m calling conflict of interest here. O’Donnell was on the board of the purported victim’s charity until last year.

This case, in my opinion, gets the state of Delaware sued. What a person does for a living should not factor as a bias as part of a legal decision.

I also do not condone what Mr. Busch, (nor do I care for him) supposedly did do that day, but this water is so muddy and murky its sad for all involved.

Wow….thanks for the info. Agreed very sad it has come to this nonsense.

This wasn’t a criminal trial. It was asking for a no contact order. Busch’s fighting it, made it a much more sensational issue than it would be otherwise.
Domestic violence can’t be condoned no matter what one thinks of the alleged victim or their motives.

Not a Busch fan, but I believe NA$CAR is railroading him. The timing of Ms. Driscoll’s presence on TV yesterday
prompted O’Donnell to act. I’ll bet they don’t act so strongly when “workplace violence” occurs between two of
their star drivers. Wait for the courts before rushing to the judgement of one entertainment driven czar.
Let’s also see if any media members dare to question due process.

This is all the result of the Ray Rice incident. If this happened two years ago the result would not have been the same. It’s been so sensationalized in the media that it’s become a hot button issue that every organization that cares about public opinion has to posture to appear they are “fighting the biggest problem facing the world today”.
Personally I think Busch did something that qualifies as domestic violence but I’m not sure anything has been proven and technically he hasn’t been charged with anything. This is just another example of how this country has changed. Now days you really are guilty until proven innocent because that’s the way the media treats you and the media is shaping public opinion.

I believe that NASCAR reacted because Chevrolet pulled their support for Busch. It’s all about PC/money… not about morality.