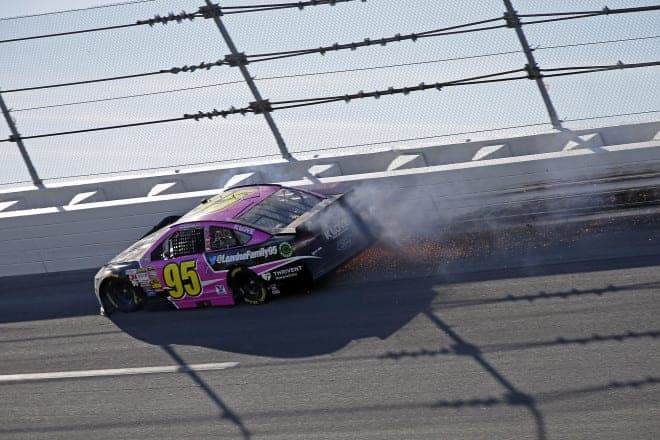 Hours after Kyle Busch suffered a leg injury at Daytona, hitting the inside wall at a place where the 2.5-mile superspeedway had no protective SAFER Barrier the Track President promised immediate changes. Joie Chitwood III, in a hastily arranged press conference, announced in a stern voice the track would spend the money needed to add the protective absorbent around every area of the track that has a concrete barrier.

Chitwood claimed the immediate, short-term fix is to put tire packs along the 850-foot, linear square feet of wall where Busch had his incident. That improvement will be in place, according to NASCAR and Chitwood, in time for the start of tomorrow’s Daytona 500.

“Following that,” Chitwood added. “Daytona International Speedway is going to install SAFER barrier on every inch at this property. This is not going to happen again.”

However, the sanctioning body stopped short of requiring every track to have a SAFER Barrier across every inch of concrete wall. O’Donnell said, “We will accelerate those talks with the tracks. We want this sport to be as safe as possible.” He also claimed that there have been tracks where a SAFER Barrier in certain places was not recommended as the best solution, like Eldora.

In response to financial concerns, Chitwood made clear it won’t be an issue for Daytona. “We don’t want to see any competitors injured here,” he said. “We have to fix that. We have to have a venue at which we can put on NASCAR racing and have competitors be safe.”

NASCAR, for its part, does not help the tracks financially with installation. O’Donnell made clear the money the sanctioning body spends is through Research and Development, constantly working to find the best improvements the tracks could install to make races safer.

Busch, who remained at a local hospital Saturday night, was knocked out of starting Sunday’s Daytona 500. His No. 54 Toyota took a hard, direct hit on the inside wall entering turn 1 after he was part of a multi-car accident triggered when he and Erik Jones made contact.

Typical. React after an injury, don’t be proactive. I figured that Gordon hitting all those unprotected walls at Pocono and elsewhere would’ve led them to have fixed that problem by now. Must take an injury, which Gordon luckily never got. And had it been Josh Reaume, nothing would’ve been said today. Reminds me of 15 years ago. “Tony Roper? Who’s that?” “Oh no, not Dale! Safety now!!”

I guess additional SAFER barriers did not fit in with the original spirit of the $400 million Daytona Rising project.
By saying they want the sport to be safe as possible, NASCAR really means that as long as cars flip over, fly into catch fences, or crash into exposed walls and the drivers walk out or have minor injuries, mission accomplished.
The show is put on and they skate by for another race.
I think this plate racing is going to come to a head really soon. It would not surprise me to see a strike at one of these plate races, or the car owners not wanting to run cars at Daytona or Talladega. I think the cars electing to sit out the Bud Shootout last week may be the first step toward this. These teams are going through multiple cars and that’s just practice and qualifying. I would like to see what RTA has to say. It has been pretty silent since the announcement of its creation, not so coincidentally the day after the July Daytona race.

I thought the Racers Alliance would use their power in situations like this, they presented there grouping as a way to control cost, but in the end it is all related and so far crickets. Somebody needs to man up, this is not a sustainable business model, imo..too one sided. Revolution I hope!

Someone should fire Chitwoods ass.