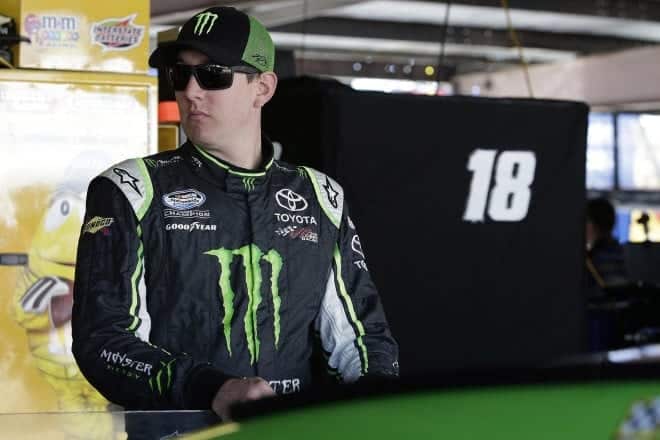 A vicious crash has taken Kyle Busch out of tomorrow’s Daytona 500. Busch, who was running the XFINITY race Saturday suffered a right leg injury when he was tapped from behind on Lap 113 of 120. The No. 54 Monster Energy Toyota, the innocent victim of one of Daytona’s “Big Ones” made heavy contact with the inside wall, impacting at a place where there currently is no SAFER Barrier.

Busch, who initially exited under his own power immediately sat down on the ground in pain. Medical personnel could be seen stabilizing his right leg, neck, and back as the driver was transported to a local hospital for further evaluation. Wife Samantha, pregnant with the couple’s first child could be seen in tears as she was shuffled quickly away to join her husband.

Kyle’s injury, combined with Kurt’s NASCAR suspension means there will be no Busch brother in the Daytona 500 for the first time since 2000. Joe Gibbs Racing, in announcing details on his condition has not yet given a substitute driver. Pickings are slim among Toyota drivers who have not qualified for the event; JGR’s XFINITY Series stable does not include one who has made a career Cup start. The only Toyota drivers that did not qualify on the Cup side were rookies Jeb Burton and Justin Marks. Matt Crafton, the two-time reigning Truck Series champion could potentially be available, along with former Cup regular David Reutimann.

First of all, nobody ever wants to see a driver get hurt. However, this is one of the biggest risks from wanting to run in a lower series. Kyle Busch’s bread-and-butter is his cup ride. Now, because he wants to run in the Xfinity series (and trucks too), he got hurt, and is going to miss the Daytona 500. Maybe now, Joe Gibbs (and Penske too)will stop running his Cup series drivers in any lower series races, and put up-and-comers in his cars.

Also, how is it that there was this very large area of wall not covered with a SAFR barrier? NASCAR/ISC cheaping out again? Wait for something bad to happen, then correct the situation?